A Quiet Place Part II picks up immediately where the 2018 surprise hit A Quiet Place leaves off, with Evelyn (Emily Blunt), Regan (Millicent Simmonds) and Marcus (Noah Jupe) trying to figure out their next move after their home was attacked and their husband/father, Lee (John Krasinski), was killed by alien creatures that have attacked the earth. Actually, that’s not entirely true, as the film begins with a flashback to “Day 1” of the alien invasion, where we actually get to see the small town the Abbott family lives in, and how everything went to hell almost immediately once these creatures landed on earth.

It’s a nice introduction to the movie that eases viewers into things instead of picking up right in dead silence where we left our protagonists. The craziness of getting to watch these aliens, who hunt by using their acute sense of hearing to track their prey, show up in a bustling little town and just slice and dice people left and right also sets the tone for the still quiet, but also a lot noisier, much more action packed sequel that we’re about to witness. The best comparison would be the change in atmosphere in going from Alien to Aliens, where things are still incredibly intense the second time around, but the focus is on raising the stakes – and also the amount that you see the creatures who are no longer regulated to the shadows in order to be scary.

This can sometimes be a risk with this type of horror, sci-fi, suspense film, as the air of mystery surrounding the creatures can sometimes be what makes them so effective in their role. Once you take that away and constantly show them on screen you run the risk of having them lose their power over commanding fear from the audience, and in turn, the movie suffers. Luckily, Krasinski – who once again takes his place behind the camera in the director’s chair – knows how to handle things and much like the Xenomorphs remained fearsome foes in Aliens, these unnamed lethal hunters of sound do the same.

So after the brief flashback we jump back to where the last film left off, and the Abbott family is trying to figure out their next move. Now, some things will need to be forgiven or looked over or else you could really just pick apart both films if you really wanted to. The first film was always meant to stand alone, so when it became a big hit and a sequel was put on the table then just how to go about doing that properly had to be figured out.

Krasinski also takes on the role of the lone writer this time out and while the film still has plenty of horror and suspense, it’s also much more focused on quick pacing and upping the action as well. A Quiet Place Part II adds intriguing scenarios that allow for these killing machines to remain on screen a lot longer, and to really showcase the damage they can cause when left unchecked. It’s a great way to give both films their own individual feel, while also making them feel perfectly in sync. Had Krasinski just played it safe and had the family move to a new location and again, simply remained as quiet as possible in order to survive, it’d just feel like a cash grab, while this film doesn’t.

At the end of the first film we see the creatures charging towards the Abbott household after the final confrontation, and it cuts to black after Evelyn cocks her shotgun as they’ve figured out how to kill these creatures. This allowed the film to end on a note where we at least knew the family could make a last stand if we never saw them again. With the making of this sequel, the film backtracks ever so slightly and the creatures are no longer all charging at the home. It’s quiet and the family is now gathering a few needed things in order to move on.

Regan heads up to the top of the grain bin where her dad lit the fire to allow their neighbours to know there was still life out there, and the neighbours reciprocated in kind. This time, however, when Regan lights the fire only one fire is lit in the distance. Did the other neighbours die? It’s unclear, but the Abbott family now has a direction to head in as they silently move on from their once safe haven that is now in tatters.

Their new destination also introduces us to the best addition the sequel could’ve asked for in Cillian Murphy, who plays Emmett. We’re briefly introduced to Emmett in the opening scene of the film, back when things were normal; but like everyone, he’s been through a lot over the past year and is a changed man with not a lot of hope left. Murphy is fantastic and his chemistry with everyone is completely natural. He’s the perfect addition to counter the loss of Lee because even though they were friends when the world was okay, Emmett has been through a lot more trauma than Lee and his lack of hope gives the character something to build off of instead of simply replacing one father figure with another.

Regan also takes on a stronger role in the absence of her father, and now that she knows how to hurt these creatures she wants to share it with others so they can fight back. So when Regan goes off on a mission to find other survivors to pass along this information, Evelyn pleads with Emmett to go rescue her and bring her back safe. Simmonds and Murphy play off of one another wonderfully and were a pairing I wanted to see more of. With Regan and Emmett being out in the open it allowed for the potential to build upon this new world in a larger scope, outside of the single location we’d remained in throughout the first film. Instead it felt like the surface to their dynamic and chemistry was barely scratched due to time spent elsewhere.

That elsewhere is with Marcus and Evelyn, who have to deal with a creature attacking once again because Marcus couldn’t stay put when Evelyn went out for supplies. This setup does lead to a number of awesome action sequences and Blunt getting to be a badass and I’m all for more of that, I just really wished some more time was spent with Regan and Emmett. The film is 97-minutes, but the time flies by. I know pacing in a film like this is key, but give me an extra 10-15 minutes of those two traversing the land and dealing with both new and old threats and I’d be thrilled.

If anything, to say that I only want more of everything is praise to this terrifying world that Krasinski has created here and the characters these actors have brought to life. The intensity is high throughout A Quiet Place Part II, and the way it plays makes it feel like the second chapter in a three part tale. Now in saying that it must be noted that like the first film A Quiet Place Part II works just fine without another movie to follow it up; however, it just feels like there’s at least one more story to tell here and if a third film does get announced I’ll be anything but quiet when it comes to my excitement towards it. 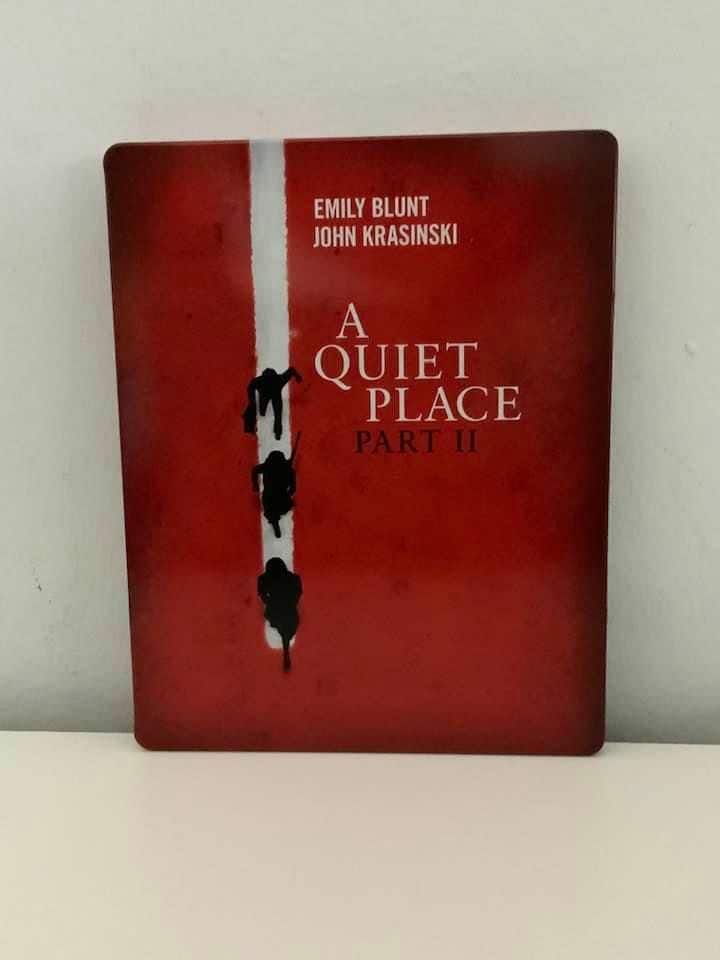 A Quiet Place Part II also comes with a beautiful looking Steelbook for fans to enjoy. It’s simple, yet incredibly effective in design, with a case that’s a blood red with darker, blackish tones around the edges. It’s a great look that works so much better than if the case had simply been a flat blood red. We’ve also got an overhead shot of the Abbott family taking those fateful steps off of the white sand and into the unknown coming vertically down the cover alongside the film’s title. 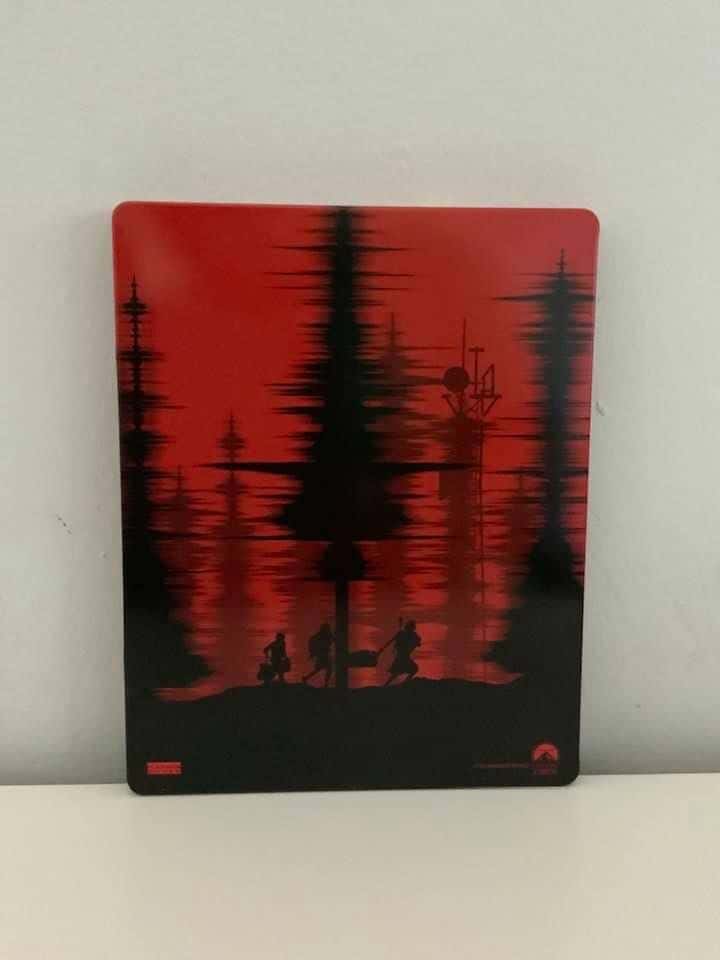 The back continues the artistic brilliance, with the Abbott family running through the forest, but the trees are actually soundwaves, giving it such a great sense of the sounds being made, and it gives off a sense of dread just by looking at it because we know what’s lurking just around the corner. The soundwaves are all black, as are the outlines of the Abbotts, and the blood red continues on from the front for a nice, consistent look. 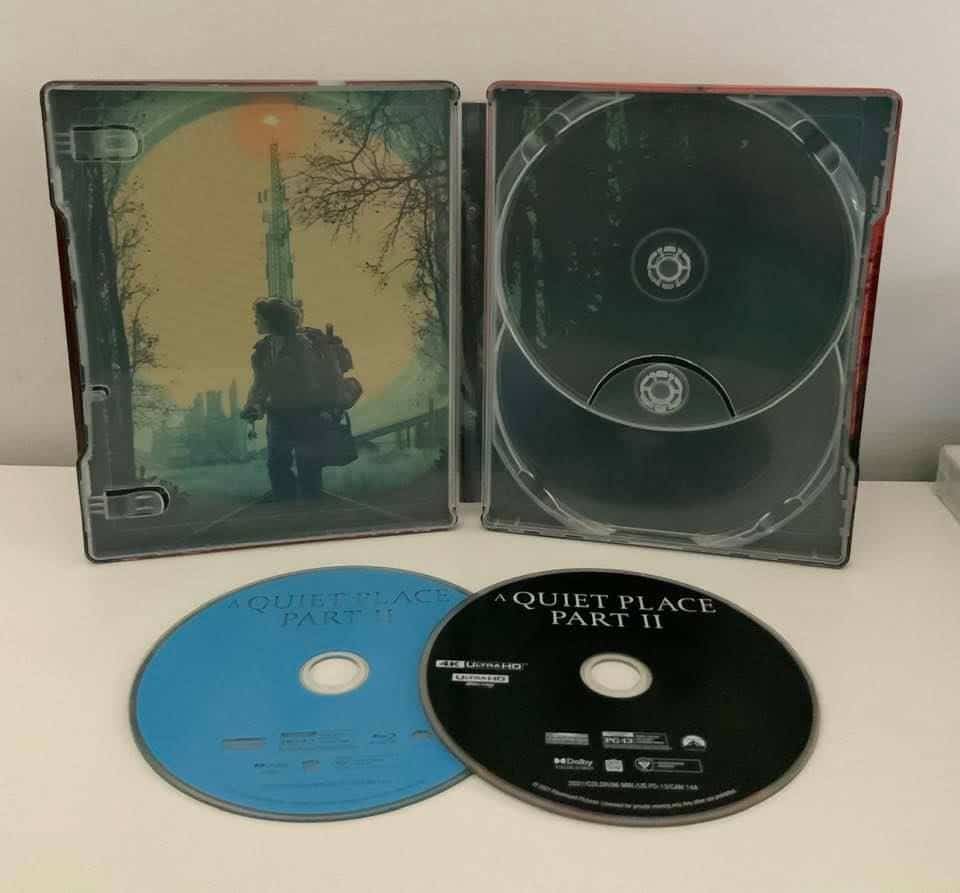 On the inside we have an artist rendition of Regan embarking on her journey to find other survivors on one side, and the other side is the darkness of the woods and world she’s heading towards. I almost expected to see the creatures here with how much they’re shown in the film, but I appreciate Regan getting showcased with her much more prominent role in the sequel.

A Quiet Place Part II looks wonderful in this 4K transfer, be it night or day, and the film has its share of both. The 2160p/Dolby Vision visuals truly shine here, with rich blacks and stunning whites depending on what the scene calls for. There are a number of scenes inside Emmett’s bunker where bits of light are shining through, and they wonderfully highlight the characters while the shadows remain deep, with no signs of muddiness or bleeding.

Then we’ve got the Dolby Atmos soundtrack, which a film like this can live and die from. Sound is vital to all movies, but with one like A Quiet Place Part II it’s taken to another level, as the silence is just as important as the small sounds that trigger tension, and the superb score that helps carry the story forward in between the extremes. 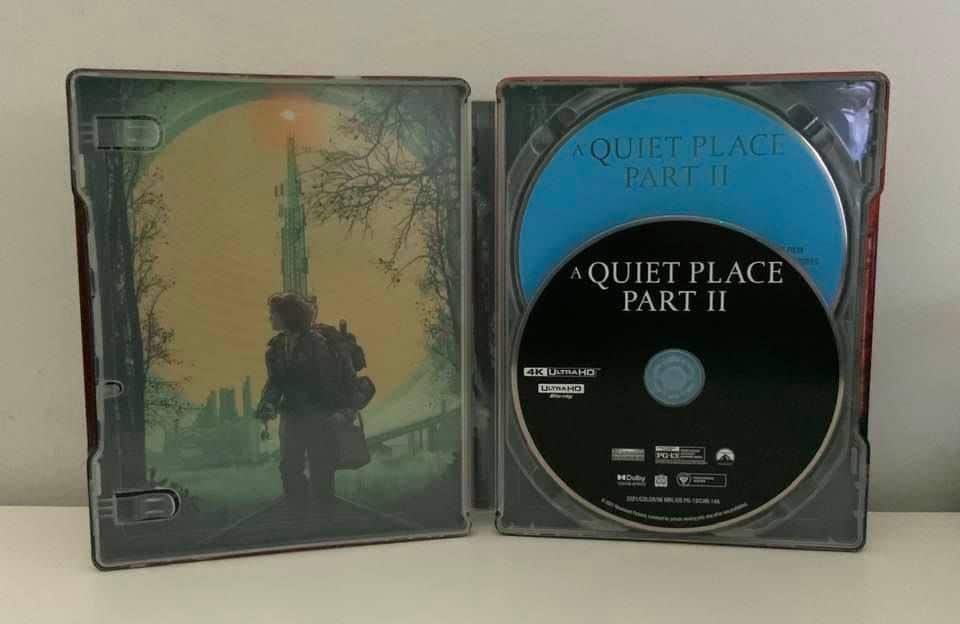 Director’s Diary: Filming with John Krasinski – This feature comes in at just under 10-minutes in length and focuses on how the sequel came to be, the steps taken to build upon the original, the various locations the film is shot in, as well as post-production. It’s a fun watch, but also something you wish there was more of. This is a movie where a commentary track would’ve been great.

Pulling Back the Curtain – This is a 4-minute featurette that touches on the story, as well as the creatures and how they have a more visual role this time around.

Regan’s Journey – This featurette is just over 6-minutes in length and talks about Regan as a character, how she’s grown since the first film and how she continues to do so in the sequel.

Surviving the Marina – This is a 5-minute feature that takes a look behind-the-scenes at this crazy action scene. A really great scene that just underlined how much I wanted more Regan and Emmett.

Detectable Disturbance: Visual Effects and Sound Design – This is an eight-and-a-half minute feature that focuses on the, you guessed it, visual effects and sound design within the film. It’s a fun feature that fans will enjoy.