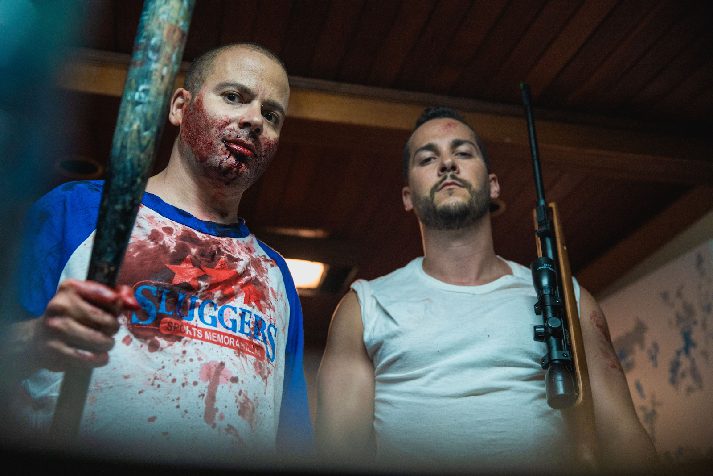 A scene from the docu-style horror comedy, ‘Faking a Murderer.’

Filmmakers Adam Rodness and Stu Stone are striving to break the latest hit crime story, only to eventually realize that they’re actually in over their heads, in the new horror comedy, ‘Faking a Murderer.’ The duo’s struggle to save themselves after they set out to catch a potential killer is being chronicled in the docu-style movie, which is being released today on VOD and digital by 4Digital Media.

In honor of the film’s distribution, ShockYa is premiering an exclusive clip from the feature, which is titled ‘Truce.’ In the clip, which features Stone, Rodness and Tony Nappo, the former two actors’ characters, Stu and Adam, begin to crumble as they come to terms that they may have killed someone.

Besides starring in ‘Faking a Murderer,’ Stone also served as the director. He and Rodness also wrote and produced the comedy, which stars Josh Cruddas, as well.

‘Faking a Murderer’ follows two filmmakers-Adam and Stu-on their noble yet perhaps misguided quest to track down a seedy-looking stranger they’ve discovered online who, in a disturbing video, seemingly confesses to a murder. Or at least that’s what they think. Seeing the popularity of true crime shows, they decide to try and turn this discovery into their own killer hit. With the moral and financial support of a distributor, the duo sets off on their journey to try and track down the elusive creep.

When they bring the video to law enforcement, Adam and Stu are repeatedly told that it’s really not much to go on, and they’re putting a lot of time and energy into what essentially is a fool’s errand. Determined to make this work, they flex, stretch, and break their budget in pursuit of a hit new crime story. However, they soon realize that they may be in over their heads.

Most of the people and scenes in the movie are real, as the participants were unaware that they were part of a mockumentary. Even the film’s crew was unaware that the investigation and suspected killer were fictional.

ShockYa is premiering an exclusive clip from the horror comedy, ‘Faking a Murderer,’ which is titled ‘Truce,’ and features filmmakers-actors Adam Rodness and Stu Stone.