Skip to Content
Home Movies “Age of Samurai: Battle for Japan” Review: Age of Samurai serves as a veritable primer on the most turbulent period in Japanese history 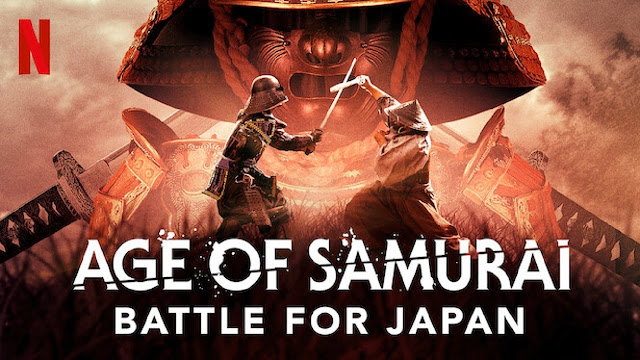 Samurai cinema, also called
“chanbara” or “chambara”, is the Japanese equivalent of the Western genre and
it mostly deals with epic period dramas and swashbuckler films generally set
during the Edo period or Tokugawa era (1600–1868 AD). Now, it was the Japanese
master filmmaker Akira Kurosawa who first
introduced the genre to the western audiences through a series of swashbuckling
movies such as Seven Samurai (1954),  The
Hidden Fortress (1958), Yojimbo (1961), and Sanjuro (1962).  Kurosawa’s samurai
movies usually celebrated and glamorized the samurai tradition (pride, honor, and
sacrifice as laid down by the code of Bushido) which basically made the samurai
look cool. But there’s a flip side to every coin. Another master Japanese
filmmaker Masaki Kobayashi presented a darker, grimmer, and perhaps a more
realistic picture. His chanbara masterworks Harakiri (1962) and Samurai
Rebellion (1967) are perhaps the earliest examples of realistic portrayal of
samurai’s life in feudal Japan. Later on,
however, Kurosawa did correct his course by making two of his finest
masterworks—Kagemusha (1980) and Ran (1985). Both these films are evidently
much closer to Kobayashi’s bleaker interpretation.

For most of
the world, these films are an entry point to what it meant to be a samurai and
there is hardly anything known beyond the scope of these films as well as
others subsequently made by filmmakers like Yôji Yamada, Takashi Miike, and
Takeshi Kitano. But what if someone wants to get into the intricacies
beyond the scope of these films? What it really meant to be a samurai? What did
it take to become one? Where did they come from? Well, if you too are looking
for answers then you needn’t look any further than the six-part documentary
series by Netflix titled “Age of Samurai: Battle for Japan”. Relying on graphic
re-enactments, voiceover narration, and interviews of historians, the series
tells the story of the bloodiest period in Japanese history when the country
was facing a civil war with several powerful daimyo (warlords) vying for
supremacy during the final phase of the Sengoku period in feudal Japan from
1551 to 1616.

Some of the key historical
figures that the series brings to life include the unpredictable and
bloodthirsty Oda Nobunaga who becomes head of the Oda clan upon the death of
his father Oda Nobuhide in 1551. Nobunaga launches a war against other daimyo
with the aim of unifying Japan. Ruling with an iron fist and showing zero
tolerance for those who dared defy his authority, Nobunaga ingeniously devises
an uninterrupted infantry fire (called the volley fire) by shooting arquebuses
(an early type of portable gun) in rotating ranks. The ploy proves to be
decisive for Nobunaga at the Battle of Nagashino (the battle and the resulting
carnage forms the chilling climax of Kurosawa’s Kagemusha) in 1575 where his
men decimate the formidable army of Takeda Katsuyori (the son of Japan’s
pre-eminent daimyo Takeda Shingen, portrayed by the legendary Tatsuya Nakadai
in Kagemusha). But, at the height of his glory, Nobunaga is eliminated by his
own samurai general Akechi Mitsuhide in 1582. Mitsuhide in turn is killed by Nobunaga’s
loyal retainer Toyotomi Hideyoshi at the Battle of Yamazaki, only a couple of
weeks later.

Age
of Samurai then follows Hideyoshi’s quest for supremacy. A peasant
with no traceable samurai lineage, Hideyoshi had risen in stature under
Nobunaga who unlike other warlords put merit about lineage. After Nobunaga’s
death, Hideyoshi kills Mitsuhide and goes on to fulfill Nobunaga’s dream of
unifying Japan. But soon he is consumed by power and in the year 1592 he sends
his forces to invade Korea with the ultimate aim of conquering China. But after
tasting some early success, his forces are unable to overcome the local Korean
resistance and the invasion ultimately proves to be a suicidal mission. Unable
to come to terms with the reality, Hideyoshi grows more and more delirious,
refusing to call his troops back. When he breathes his last in 1598, his
council finally withdraws the forces from Korea.

Hideyoshi’s death provides
an easy passage to power to the cunning and calculative Tokugawa Ieyasu who has
been waiting in the ranks for his turn to finally claim the throne for himself.
After the decisive Battle of Sekigahara in 1600, Ieyasu slowly begins to destroy
all the opposing factions. In 1603, Ieyasu is conferred with the title of
shogun, having outlived all the other great warlords of his times. The Sengoku
period ends when Toyotomi loyalists get defeated at the siege of Osaka in 1615.
The Tokugawa Shogunate would rule Japan for the next 250 years until the Meiji
Restoration in 1868.

Age
of Samurai has been criticized for leaving out some important
events as well as for its several other minor inconsistencies such as inaccurate
depiction of samurai hairstyles, armor, etc. Also, unlike some of the other
documentary series relying on re-enactments, Age of Samurai provides little dialog to the actors portraying the various
warlords and relies mostly on the voiceover and the interviews which somewhere distances
us from these characters. However, despite the shortcomings, it serves as a
veritable primer on the most turbulent period in Japanese history.