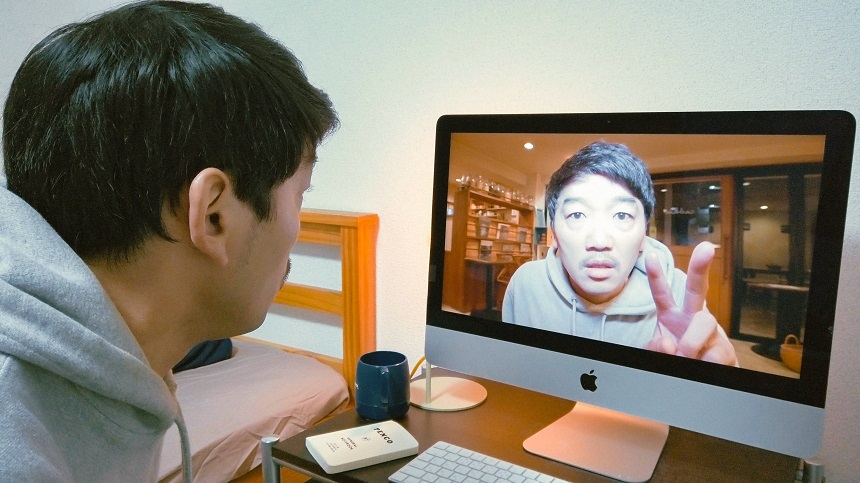 “The whole thing goes: The future’s not set. There’s no fate but what we make for ourselves.” – John Connor

Kato owns a small cafe and at the end of a long day heads to his apartment in the building above. He is going to call it a night but then something weird happens. He appears on the monitor in his bedroom, talking to him as if in real time. Except its not real time. It’s two minutes into the future and Kato is talking to himself from back down in the cafe.

Confused, Kato heads back downstairs and the cycle has started. Kato gets his coworker and a couple of his friends involved and together they try to make sense of it all while wondering if there is any way to benefit from this if they know the future. But with only a two minute loop what could you possibly do in that time? They will soon find out that their actions may have immediate as well as temporal consequences. Welcome to the indie sci-fi world of Beyond The Infinite Two Minutes from Japan, land of infinitely long monitor cables.

Beyond is a wonderful little sci-fi film by first time feature film director Junta Yamaguchi. member of Europe Kikaku theatre group from Kyoto. The movie itself was a creation by the troupe, based on a script written by member Makoto Ueda (written after they figured out what location they would use for the film and he could figure out the time it took to get from the cafe to the apartment and elsewhere around the building).

Beyond was filmed and constructed to appear as a single take (if you know what to look for you’ll know where the cuts are) and this is where having theatre actors as your cast pays off since they were already used to doing stage productions that have a longer run time than this efficient little indie film.

It’s very clever filmmaking on behalf of everyone because Beyond may be the first time we’re watching timey wimey events happen in real time, for over an hour. We do not think that there has been anything like Beyond before where the past, the present and future, all happening at the same time in front of our eyes for the complete duration. Such an achievement in and of itself and full credit to everyone for pulling it off. Not as simple as they’ve made it out to be.

Member Kazunari Tosa stars as Kato, a very relatable and affable character, trying to figure out what is happening and if he even wants to know what he will do two minutes from now. Aside from the confusing loop Kato also pines for the woman who works in the barber shop next door. He is also a musician and has a show coming up soon. Maybe she would like to be invited to the show? He cannot help but wonder if the magic monitors have anything to say about that.

Beyond The Infinite Two Minutes is very funny and completely enchanting. It is destined to be a crowd-pleasing, feel good sci-fi comedy that is equally smart and affectionate. While his friends may be figuring out how to profit from the loop they’re also his friends and so things that happen to him throughout this story also affect them. The humor is spot on and delivered in a wonderous deadpan way with exceptions of a couple exhaultations.

It is also a story that is not without risk, for that helps Kato decide what to do with all this knowledge by the end of the film. Is he willing to have his actions governed by the loop or will he trust his own instincts and take the future into his own hands?

Beyond The Infinite Two Minutes is now On Demand on the Fantasia Film Festival digital platform.