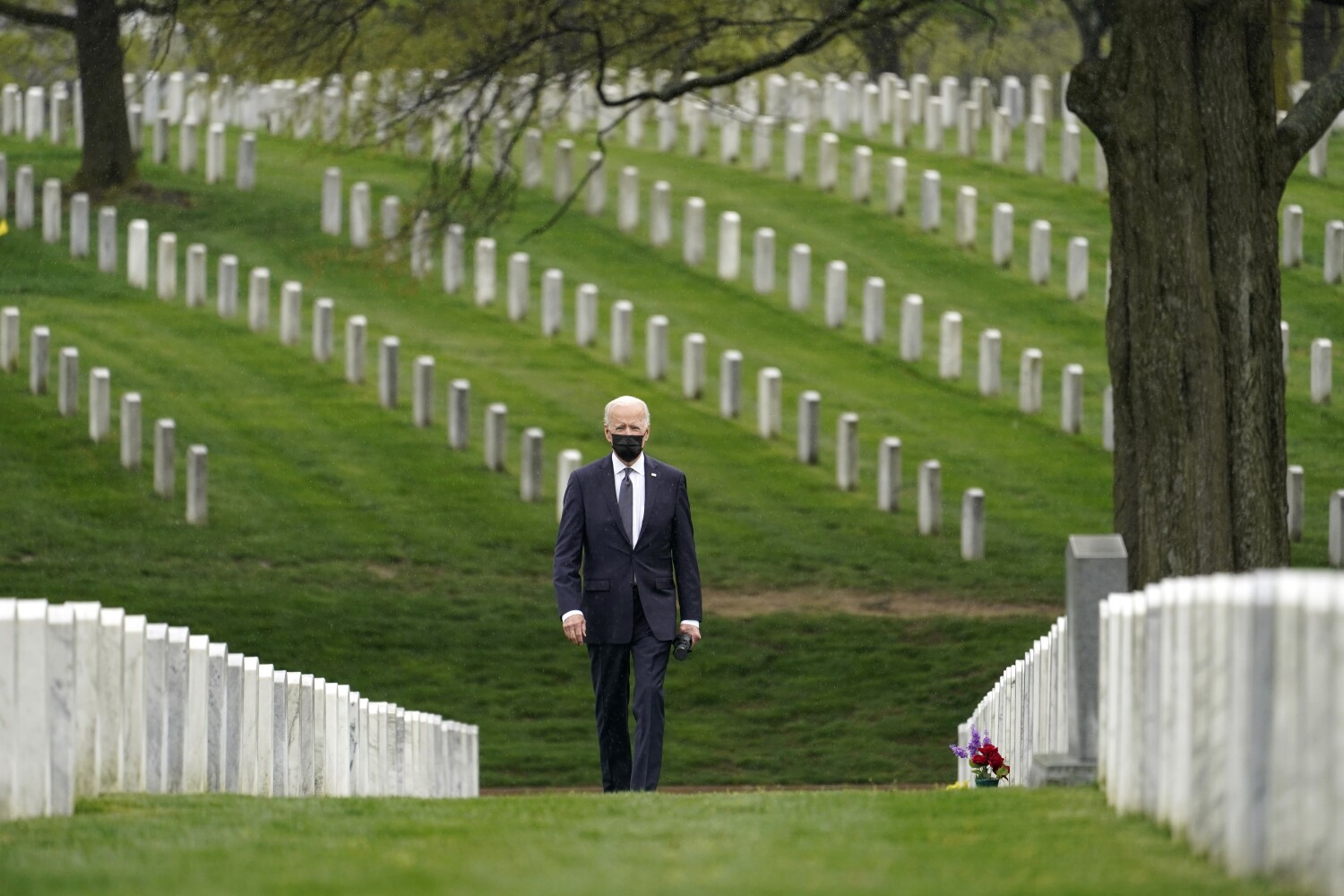 President Biden on Wednesday formally announced a Sept. 11 deadline to end military involvement in Afghanistan, arguing that the 2001 terrorist attacks that led to the U.S. invasion can no longer justify prolonging an unwinnable war.

“We went to Afghanistan because of a horrific attack that happened 20 years ago,” Biden said, referring to the Sept. 11, 2001, attacks on New York and Washington, which Al Qaeda planned from Afghanistan. “That cannot explain why we should remain there in 2021.”

“War in Afghanistan was never meant to be a multi-generational undertaking,” Biden said. “It’s time to end the forever war.”

Biden’s plan, which U.S. officials had disclosed Tuesday, means the United States will miss the May 1 deadline the Trump administration set last year in a deal with the Taliban. Instead, the U.S. drawdown will start on that date, Biden said.

Speaking from the White House Treaty Room, where then-President George W. Bush announced the first airstrikes against Afghanistan in 2001, Biden cast the decision as an overdue admission that the United States has fallen short of its maximum goals. Despite thousands of casualties, and nearly a trillion dollars spent, a stable Afghanistan has not been achieved.

With Osama bin Laden’s death a decade ago, the U.S. accomplished its original objective of punishing those who planned the Sept. 11 attack, Biden said. Since then, he added, the U.S. reasons for staying have become “increasingly unclear.”

The withdrawal was also necessary to reorient national security priorities toward more urgent threats, he said, noting that Afghanistan is no longer the center of activity for anti-U.S. militants, who can be found scattered across Asia, Africa and the Middle East.

Senior Republicans on Tuesday announced opposition to Biden’s September deadline, despite polls showing that ending the war is popular with the American public.

“Any withdrawal of forces based on a political timeline … that is not based on conditions on the ground puts Americans’ security at risk,” Rep. Liz Cheney (R-Wyo.), a member of the House Republican leadership, told reporters at a news conference. The congresswoman’s father, Dick Cheney, was vice president when the U.S. invaded Afghanistan.

Biden sought to rebut that criticism, saying that making the withdrawal subject to conditions on the ground was a recipe for an endless stay.

“We cannot continue the cycle of extending or expanding our military presence in Afghanistan, hoping to create the ideal conditions for the withdrawal and expecting a different result,” Biden said.

“I am now the fourth United States president to preside over an American troop presence in Afghanistan. Two Republicans. Two Democrats,” Biden said. “I will not pass this responsibility onto a fifth.”

After the speech, Biden visited Arlington National Cemetery to pay his respects to Americans killed in the Afghanistan conflict. He stood among the tombstones and said: “Look at them all.”

Noting that he was the first president in 40 years who has had a child — son Beau — in armed conflict, Biden pulled a card from his jacket pocket with the precise number of U.S. casualties as of Wednesday morning: 2,488 killed, 20,722 wounded. Many tens of thousands of Afghan troops and civilians have died, as well.

Biden said that he had spoken with Bush about the decision to withdraw and that although they differed on many issues, they were united in honoring the troops. “We as a nation are forever indebted to them,” he said. Biden also called former President Obama, the White House said. He notably did not call former President Trump.

At least 2,500 U.S. troops remain in Afghanistan, although special operations troops and other units that rotate into the country can take that number to 3,500 or higher. Almost all of the additional 8,500 troops from NATO allies and other countries now in Afghanistan are also expected to withdraw.

“Any Taliban attacks on Allied troops during this withdrawal will be met with a forceful response,” NATO leaders said in a statement announcing the plan.

“The threat from Al Qaeda in Afghanistan is significantly degraded. Osama bin Laden has been brought to justice. We have achieved our original objective,” Blinken said. “And we don’t believe that maintaining an indefinite troop presence in Afghanistan is in our interests.”

He warned Taliban leaders against intensifying attacks on departing foreign troops or on Afghan government forces. Doing so would cost them foreign aid vital to rebuilding Afghanistan and any prospect of having sanctions against their leaders lifted, he said.

Austin provided the first hint that the Pentagon will seek to continue paying salaries of the 300,000-member Afghan military. But he suggested the details of the continued aid were up in the air, and he did not say if thousands of U.S. contractors assisting Afghan forces would stay on.

Afghanistan’s army and police have been heavily dependent on U.S. military assistance, while its government is largely funded by foreign aid — help that could begin to dry up even as the fighting between the central government and Taliban militants intensifies.

“We will look to continue funding capabilities such as the Afghan Air Force, and special mission wing,” which provides casualty evacuation, reconnaissance and is trained to fly helicopters and light aircraft at night, Austin said.

The fate of Afghans who worked with U.S. forces — as interpreters and guides as well as in other roles — remains a major consideration for the administration, said Rep. Adam B. Schiff (D-Burbank), chairman of the House Intelligence Committee, who discussed the matter with a member of Biden’s National Security Council on Wednesday.

“I think it’s very much a priority of the administration” to ensure those who helped U.S. forces are not put in jeopardy, Schiff said. “They recognize that we have not always lived up to our responsibilities” in past conflicts, including in Vietnam, in which “people who risked their lives working with U.S. forces have been left behind,” he said.

The administration continues to hope that negotiations may achieve a political settlement between the Taliban and the Afghan government that could provide protection, he said. If not, the administration needs to be prepared to act to provide visas to allow people who aided the U.S. to resettle here, Schiff said.

Ahead of Biden’s speech, CIA Director William J. Burns told lawmakers that the withdrawal of U.S. troops will curtail the ability of the U.S. to gather intelligence on threats and to deter them.

The “government’s ability to collect and act on threats will diminish — that’s simply a fact,” Burns told the Senate Intelligence Committee. “All of that means there is a significant risk once the U.S. military and coalition military withdraw.”

Burns said that Al Qaeda and Islamic State in Afghanistan “remain intent on recovering the ability to attack U.S. targets, whether it’s in the region, the West or, ultimately, the homeland.”

However, he added, “after years of sustained counter-terrorism pressure, the reality is that neither of them have that capacity today, and there are terrorist groups … that represent much more serious threats today.”

The CIA and other agencies will “retain a suite of capabilities” that will help the U.S. “anticipate and contest” any rebuilding effort by terrorists in Afghanistan, he said.

Schiff said he agreed that the withdrawal will complicate U.S. intelligence efforts. “We’ll need to find workarounds,” he said. But, he added, “those risks have to be weighed against the continued risks to our troops” of staying in Afghanistan.

Like many members of Congress, he said, “I’ve been to many funerals for my constituents who served” — several hundred Californians are among the U.S. service members killed in the conflict. “I think we all want to honor their service and make sure that the threat they fought and died to protect the country against does not reoccur.”

A couple of hours before his speech at the White House, Biden spoke with Afghan President Ashraf Ghani. Biden “emphasized that the United States will continue to support the Afghan people, including through continued development, humanitarian, and security assistance,” the White House said in a statement. The two agreed that “every effort should be made to achieve a political settlement so that the Afghan people can live in peace,” the statement added.

But a Taliban official reiterated Wednesday that U.S. and other foreign forces should leave Afghanistan by the May 1 deadline the Trump administration signed on to during negotiations in Doha, Qatar.

“The Islamic Emirate of Afghanistan seeks the withdrawal of all foreign forces from our homeland on the date specified in the Doha Agreement,” Taliban spokesman Zabiullah Mujahid said in a tweet. “If the agreement is adhered to, a pathway to addressing the remaining issues will also be found.”