Skip to Content
Home Movies Blu-ray Review: Prisoners of the Ghostland – “A Schrödinger’s cat of a Nicolas Cage film” 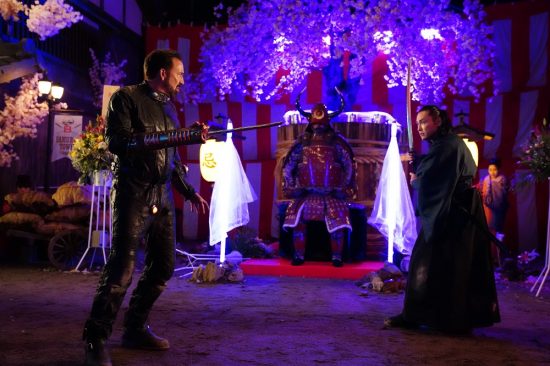 Another day, another Nicolas Cage film. Will it be good? Will it be bad? That’s the thing about Cage’s recent film catalogue, you never quite know what you are going to get. Pair him up with filmmaker Sion Sono (who is making his first English language movie) and you get something like Prisoners of the Ghostland – “A high-octane, post-apocalyptic tale of redemption and uprising.”

Here is the official synopsis to give you a better idea, although it does not really cover just what exactly you get when you press play.

In the treacherous frontier city of Samurai Town, a ruthless bank robber (Nicolas Cage) is sprung from jail by wealthy warlord The Governor (Bill Moseley), whose adopted granddaughter Bernice (Sofia Boutella) has gone missing. The Governor offers the prisoner his freedom in exchange for retrieving the runaway. Strapped into a leather suit that will self-destruct within five days, the bandit sets off on a journey to find the young woman — and his own path to redemption.

At the most basic level, it is a cross between Escape From New York meets Mad Max and a bit of 2010’s Bunraku.

I think I enjoyed the film, but it took a while. I was watching it by myself on a screener disc and I don’t think that is the optimal way to watch it. Instead, if it was late at night and I was sat with a group of friends with a couple of beers, then I feel I would have got into a lot quicker and it probably would have been a much more enjoyable experience.

Once I had finished it I was not sure whether it was one of the best Nicolas Cage films I had seen or one of the worst! Basically, it is a Schrödinger’s cat of a Nicolas Cage film and splitting the difference I would say it ends up being an okay watch with some highs, some lows and Cage riding a pushbike that is much too small for him.

Tonally the film is all over the place. One moment deadly serious, the next almost slapstick, followed by a musical number, then some weird surreal scene, then a sword fight and so on. Normally, I can just go with that, but at times it was a little too jarring and on the nose.

I enjoyed the visual style of the film, but it definitely could have done with having a bigger budget just to make Samurai Town and the Ghostlands pop a little more. As it is, there are times when they were filming on a bit of industrial wasteland and you can almost feel the film crew just off-camera instead of you being sucked into this cinematic world that they are trying so hard to create.

The saving grace of the film are the performances by Nicolas Cage and Bill Moseley (sadly Sofia Boutella does not get much to do) who help make the whole thing come to life and tie everything together. They are also well supported by Tak Sakaguchi (Versus) and Yuzuka Nakaya.  In fact, I would like a prequel movie for Sakaguchi’s character.

Moseley makes a charismatic bad guy who can go toe to toe with Cage. Meanwhile, Cage (who gave an absolutely superb performance in Pig – go see it when you can) is not quite peak Cage, but he is not just coasting through the film as he has with some recent efforts. You get the feeling he was surprised with some of the decisions made, but just went with it and then added some of his own pointing, staring and shouting. There were some moments that genuinely made me laugh while other scenes made me wince – some in pain and others in disbelief.

Initially, I was not sure whether I would make it to the end of the film (and I can see some people turning it off and never returning), but as time passed I was pulled into the strange fever dream of the story. As the mythos and history of the characters and township were revealed it became a more enjoyable experience and I began to actually care about the characters and the events unfolding before me.

By the end, I was glad I had gone on the journey into the Ghostland, but wish I had had some friends to watch it with me.

Prisoners of the Ghostland hits Blu-ray and DVD from 15th November.