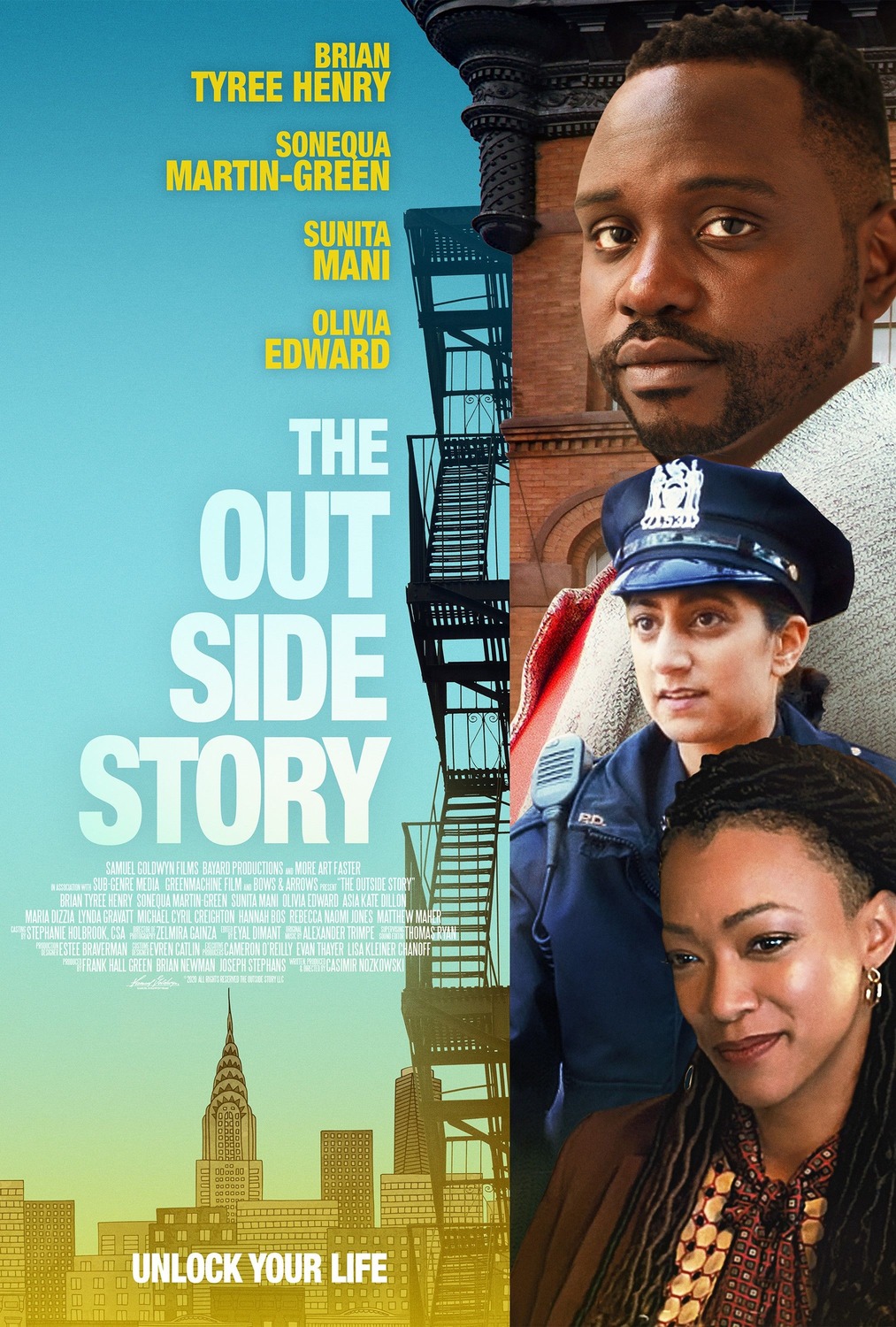 The poster for writer-director Casimir Nozkowski’s comedy-drama, ‘The Outside Story,’ which stars Brian Tyree Henry.

Sometimes being accidentally locked out of their comfort zone can lead people to purposely become more willing to engage in new circumstances that push their boundaries and make them more comfortable in forging a new path in life. That’s certainly the case for actor Brian Tyree Henry’s protagonist of Charles in the new comedy-drama, ‘The Outside Story.’ After the introverted main character mistakenly locks himself out of his New York City apartment, he embarks on an odyssey that shows him that it never helps to keep his feelings locked up inside.

The movie marks the feature film writing, directorial and producing debuts of Casimir Nozkowski, who previously found success as a filmmaker of shorts, documentaries and television series. Samuel Goldwyn Films is set to release ‘The Outside Story’ tomorrow, April 30, on Digital and On Demand.

‘The Outside Story’ follows Charles, a video editor who’s struggling to contend with heartbreak after he ended his relationship with his girlfriend, Isha (Sonequa Martin-Green). After she reveals to him that she betrayed his trust during a moment of weakness, he perceives the deception as a sign that she wants to leave him, and sequesters himself at home.

As he continues to tell himself that their relationship is over, despite not thoroughly talking about ending things with Isha, Charles absentmindedly locks himself out of their apartment. He subsequently stumbling into a transformational, timely odyssey that forces him to explore his community. As a result, he meets a diverse ensemble of his neighbors, who he previously avoided. They ultimately show him that everyone has issues, and it doesn’t help anyone to keep their problems locked up.

Nozkowski generously took the time recently to talk about writing and directing ‘The Outside Story’ during an exclusive interview over Zoom. Among other things, the filmmaker discussed that he was driven to scribe the script for the comedy-drama after he made short films that examined different New York cultural institutions, and he wanted to translate that into a feature. He also mentioned that being able to relate to Charles’ story and experiences, and also having a supportive team of actors and producers that helped him bring his screenplay to life, helped him make his feature film helming debut.

The conversation began with Nozkowski discussing what inspired him to pen the script for ‘The Outside Story.’ “Before I wrote the script, I was making short films for a long time. My short films were all documentaries that examined different New York cultural institutions. At the same time, most of my screenplays were big, epic sci-fi stories,” he revealed.

“Then at a certain point, I wanted my writing to be more reflective of the shorts I was writing, and the life I was living. I grew up, and have lived, in New York all my life,” the writer revealed. “So I thought, there’s such much around here to write about.

“I’ve also locked myself out of my house many times; for some reason, it kept happening to me. It’s super inconvenient and annoying; I’m not going to say that it’s so great to be locked out,” Nozkowski admitted.

“But I do feel as though almost every time it happened, I learned an interesting lesson. If nothing else, it felt like I was being disrupted in this really good way,” the scribe pointed out. “You can work seven days a week and lose sight of the people and life around you. Then you get locked out, and you meet your neighbors for the first time.

“So this felt like a really fun place for an ensemble story to take place. It follows someone who really wants to be inside, but then has to be outside, and as a result, meets all of these people he tried to ignore,” Nozkowski added.

“Also, at one point, I cut in memoriam videos as part of my job as a promo and commercial maker. At certain points, I was given the task of cutting these videos about, let’s say Clint Eastwood, who hasn’t died yet. But I prepared and updated these videos for when the sad day comes when these celebrities pass away,” the filmmaker revealed.

In addition to penning the screenplay, the writer noted that he also made his feature film directorial debut on the movie. He delved into how scribing the script influenced the way he approached helming ‘The Outside Story,’ and what his overall directorial style was like throughout the production.

“Well, I was super nervous because it was my first feature film. You go from making short films, where sometimes the crew is just three or four people, to having 40 or 50 people on set for a feature,” Nozkowski revealed.

“While I was nervous, I had a great team of producers, including Brian Newman, Frank Hall Green and Joe Stephans, as well as a great AD (assistant director), Laura Klein. I also had great actors who just got the story and were such pros. So I had all of these helpful people, and be helpful where I could,” the filmmaker noted.

“When I got to the production, it was the smoothest process. I’m as much of an editor as anything, so I was thinking, just get me to post (production), and I’ll fix whatever needs to be fixed,” Nozkowski continued. “But in the end, the filming was the fun part, and post was the hard part, as I had to figure out the pace.

“I think my favorite part was working with, and supporting, the actors. That part was really special, and I can’t wait to do it again,” the helmer added.

Further speaking of the actors, Nozkowski then delved into what the casting process was like for the comedy-drama. “When I think about the cast in this film, I get teary-eyed. I had great encouragement from our casting director, Stephanie Holbrook, and our producers when I approached the casting. They asked, ‘Who is your dream?,’” he shared.

“I said, ‘My favorite actor on TV right now is Brian Tyree Henry, as I love him on ‘Atlanta.’ But he’s too big for this, right?’ Everyone said, ‘Why not?’ Let’s ask him and see what happens,’” the filmmaker added. “With all of the actors, including Sunita (Mani), Sonequa and Olivia (Edward) were on my favorite shows, and they’re people I really appreciate. So overall, it felt like I was getting my number one picks.

“There are 25 speaking roles in this film, and everywhere you look are actors who are my favorites from movies, TV and New York theater. It’s such a delightful cast of my favorite people to work with,” Nozkowski gushed about the film’s cast. “When I look back on it, I feel vast gratitude and disbelief that I got to work with these people, and they trust me to see this film through.”

Once the actors were cast, the director also appreciated having some time to work with them to build their characters’ backstories, motivations and relationships. But he admitted that they didn’t have as much rehearsal time together as he had initially hoped.

“When you’re making your first film, and it’s an indie, you think, I can’t wait to get into the rehearsal process. What are we going to have-a week, or two weeks, of rehearsals? You have all of these fantasies of really digging in,” Nozkowski divulged with a laugh.

“But the truth is, when you make an indie, you’re lucky if you get a read-through and maybe a day with the actors,” the filmmaker admitted. “But I had great phone calls and emails with them and went over the characters. “What was at first daunting and then totally exciting was working with actors who understood that there was no margin for error, and they had to just hit the ground running,” he also shared.

“I think the original script was 93 pages, and we shot the film in 16 days. So we shot about five to eight pages a day, which is insane. So I’m really in awe of (the actors) as they knew going into their scenes that they were only going to get three takes, as we didn’t have time to do more,” Nozkowski revealed. “There were some scenes were we only did one take.

“I was impressed with these actors, who were totally down with this 16 day shoot. Everyone was trying to help each other, and it was an amazing thing,” the helmer added.

Besides working with the cast, Nozkowski also cherished the process of shooting ‘The Outside Story’ on location in Brooklyn. “We had a fantastic locations team who really understood that the building and block had to be characters in the film. So they went looking for apartment buildings that are architecturally interesting and fun to film,” he shared.

“Like I said, I grew up in New York, and have lived here all my life. I’ve lived in Brooklyn now longer than I’ve lived anywhere else before. So it made me happy to be able to shoot in my own neighborhood,” the filmmaker noted.

“This is the type of neighborhood I was picturing when I was writing the script. Then getting to feel as though we were part of the neighborhood was important. I also wanted to make the neighborhood feel authentic, life-affirming and universal, like this could happen to anyone,” Nozkowski divulged.

“We also wanted to tap into the fact that New Yorkers really do want to help each other. At the same time, we didn’t want to be sentimental, as New York is the ultimate unsentimental place,” Nozkowski pointed out. “So there’s kindness, without being sentimental and cheesy…It was a pleasure to be in Brooklyn and catch that vibe.”

The director then delved into why he and the producers decided to partner with Samuel Goldwyn Films to release ‘The Outside Story’ tomorrow On Digital and On Demand, after the movie screened at multiple virtual film festivals. “We were originally supposed to premiere at the Tribeca Film Festival last year in April, but the festival didn’t end up taking place because of the onset of COVID. So for months after that, I was left wondering what was going to happen to the film,” he admitted.

“When you make an indie, you need a certain kind of roll-out, like launching at a festival like Tribeca. You then playing at other festivals, and talk to distributors as you go,” Nozkowski shared.

“What was wild for this film was that we then ultimately screened at virtual festivals and tried to get the word out about the film in an uncharted, brand-new world,” the filmmaker admitted. “I originally thought I would be traveling with the film for two months, but I ended up doing every Q&A from my apartment.

“I did end up doing two in-person screenings out of 25 different festivals, and they were both at drive-ins; one was in Brooklyn, and the other was in Woodstock. That was amazing, too,” Nozkowski shared.

“But it worked out amazingly. Samuel Goldwyn is a fantastic partner, and I feel honored that this film is part of their library. Working with a company that has such a storied tradition is incredible,” the helmer gushed. “Considering how mysterious the future of this film seemed last April, I’m extremely grateful that we’re now working with Samuel Goldwyn, during a time where there feels as though there’s a light at the end of the tunnel with COVID,” he concluded.

Writer-director-produce of the comedy-drama, ‘The Outside Story’