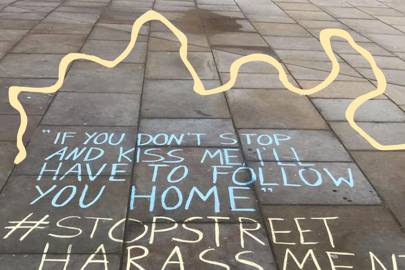 In more recent years, conversations surrounding sexual violence, street harassment and the safety of women, non-binary people and female-presenting people in public spaces have been forced to the fore. This was particularly the case following the rape and murder of Sarah Everard in March 2021 by a member of the Metropolitan Police, after which it was announced that public street harassment could be criminalised in England and Wales under new plans to tackle violence against women and girls (VAWG).

As a female university student in the UK, conversations with my fellow female students revealed that whilst the Sarah Everard case was both horrifying and terrifying; it was unfortunately not surprising. The figure 97% – the number of women who experience sexual harassment in their lifetime – neither seems shocking given the pervasive problem of rape culture and the diminishment of female trauma within society; perhaps epitomised by the very recent release of Bill Crosby.

Sarah Everard’s case has reminded women that we’re not only at risk of violence from men, but that we are blamed for it, too

The campaign Everyone’s Invited, which was founded in June 2020, aims to provide a safe platform for survivors of sexual violence and harassment to share their stories in order to provide a ‘sense of relief, catharsis and empowerment’, as well as a community of hope. Everyone’s Invited defines rape culture as the existence of: ‘attitudes, behaviours and beliefs in society having the effect of normalising and trivialising sexual violence.’ This culture includes misogyny, rape jokes, slut-shaming, victimisation, sexual harassment, street harassment, sexual abuse online and sexual coercion and results in the routine degradation of women that opens up a channel for the occurrence of more ‘serious’ cases of sexual assault and rape.

As a way of ‘reclaiming’ the streets and taking a stand against everyday acts of misogyny and harassment, powerful youth-led organisations have been mobilising on social media – just like Everyone’s Invited.

Chalk Back is an international movement committed to ending gender-based street harassment through utilising public chalk art, street murals, digital media and education. They aim to raise awareness and denormalise catcalling worldwide by providing a stage for victims to share their stories through documenting accounts of street harassment in the location where they occurred via posts on social media. Through their Instagram accounts named @catcallsof[location], Chalk Back reveals the prevalence of street harassment across 6 continents, 9 countries and 150 cities.

Here’s what to do if you’re a victim of street harassment, or you see someone else being harassed in public

As a student at the University of Edinburgh, I became aware of such organisations through the Instagram account @catcallsofedi which is closely affiliated with Edinburgh University students. This account, which takes inspiration from @catcallsofnyc and @chalkbackorg, documents women, non-binary people’s and female-presenting people’s experiences of catcalling across the city of Edinburgh. Their statistics show that the demographic which makes up the biggest following on their account is women between the ages of 18 and 24. I’m 22, and I can’t remember a time when being cat-called in the street wasn’t a common part of my reality.

The most recent example was a group of men circling around in their car shouting, “Do you want to have sex?” as I was out on a walk with a friend. It happened in broad daylight and no one else batted an eyelid, as if it just blended into the mundane background of life. From everyday instances such as these, to witnessing friends harassed by drunk men when walking home alone at night, I reached out to the founders of @catcallsofedi, Lisa Gmerek and Sylke van Duijnen, to explain why such organisations are so vital, now more than ever.

Street harassment could be made a crime, but what does the government’s new strategy *actually* mean for women, girls and marginalised genders?

“Street harassment happens so frequently that society considers it normal or even complimentary,” they say. “With our platform, we hope to raise awareness and change this mindset: street harassment is never a compliment. It is offensive, degrading and intimidating.

“On our Instagram page, those affected by street harassment can be heard and seen. It assures them that their experiences are valid and they are not alone. We hope to educate the next generation on the topic in order to prevent street harassment in the future.”

These organisations are crucial in exposing how normalised street harassment has become within our society. Through educating people on the relentless and everyday occurrences of street harassment, platforms like Chalk Back allow people to better understand how incidents of catcalling inform a culture of misogyny in which more extreme cases of sexual harassment are excused.

When the evidence shows that flashing can lead to sexual assault and leave women traumatised, why is cyber flashing still not recognised by the law?

‘Uncomfortable’, ’embarrassed’ and ‘scared’ are the three words that perhaps best encapsulate experiences of street harassment. They certainly do to me. Uncomfortable at having my bodily autonomy so publicly breached, embarrassed as if it’s somehow my own fault, and scared because they are never just words, but reminders of the violent actions that can often follow.

Until instances of street harassment are no longer a common part of my reality – and the reality of women everywhere – powerful youth-led organisations like Chalk Back won’t just be cathartic or empowering. They will be vital.