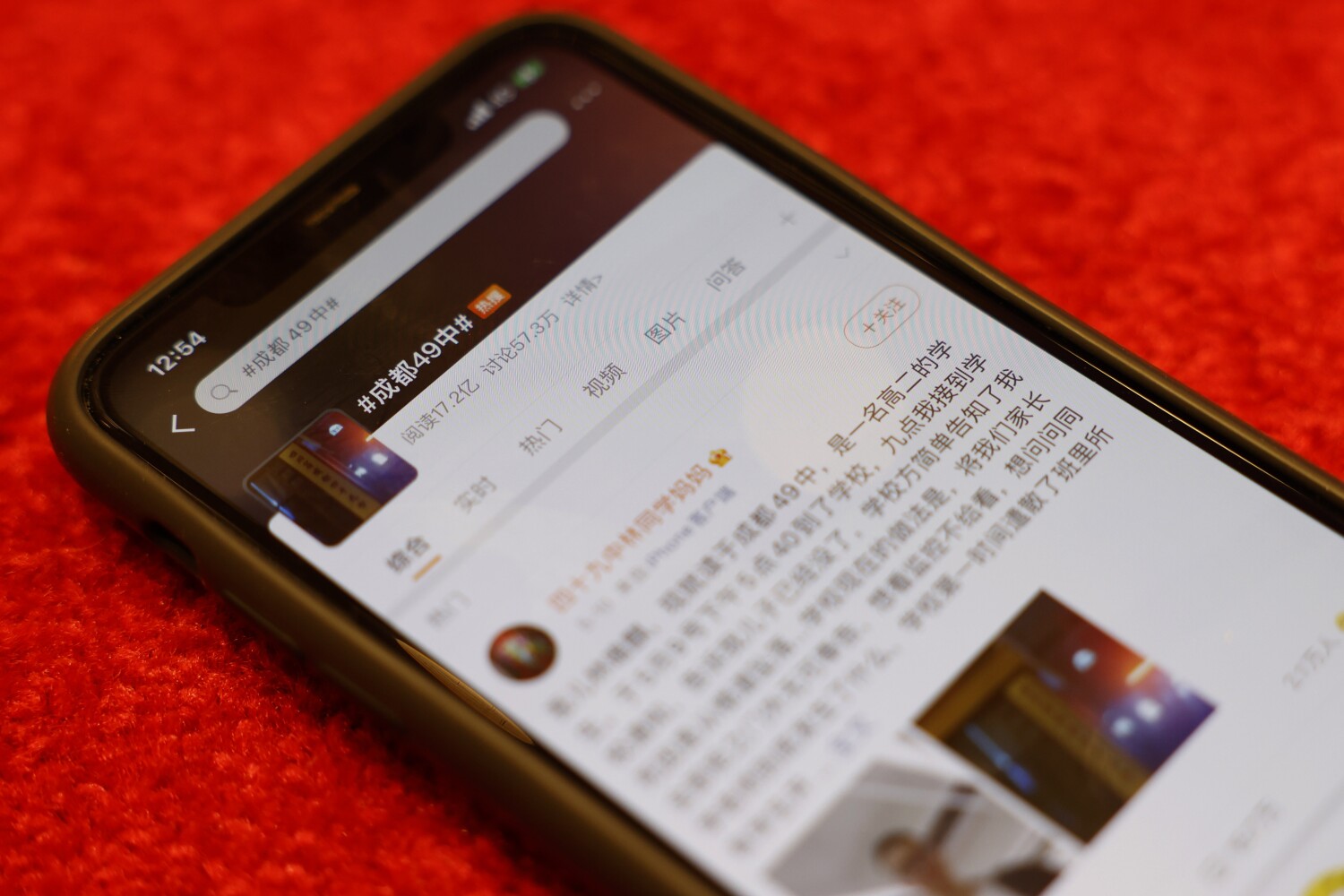 Uniformed police quickly dispersed the protesters, knocking some to the ground and tackling others, then pushing them away, as seen in several videos that went viral online. But public anger continued to grow, with millions of online views and comments demanding clarity on the mysterious death Sunday of a 17-year-old boy at Chengdu No. 49 Middle School in China’s Sichuan province.

It was the latest in a series of recent student deaths in China that have left parents heartbroken and struggling with inadequate answers or accountability for how their children died. But this one snowballed, sparking a rare outburst reminiscent of the demands for free speech that flooded China’s internet when whistle-blowing Wuhan doctor Li Wenliang died of COVID-19 at the start of the pandemic last year.

The public anger was a reminder of the frustration with official secrecy and hunger for transparency that simmer beneath the surface in China, and that sometimes can pressure authorities into responding. In this case, they did — though government clarification came with a price: a silencing of the dead youth’s family and a surge of online nationalists accusing those who sought answers of being “tools of foreign forces” trying to instigate unrest.

The outcry began with a mother’s anguished plea Monday for help on Chinese social media platform Weibo. Her son, Lin Weilin, had fallen to his death from a school building Sunday evening. She had not been notified until hours after it happened, she said, and then was denied access to the campus.

The school claimed there was no surveillance footage of the incident, warned students not to speak about it and sent the boy’s body directly to a funeral parlor without letting the parents see it, she said. When she called local media for help, reporters told her they couldn’t report on such things. Some warned her and her husband not to waste energy trying to speak up.

“I am just a regular mother and have always been a dutiful, good citizen. I believe the government, believe the [Communist] Party and believe even more in our people. Now my son is gone, yet I am like a mute with any kind of sound I try to make,” wrote the mother, who is surnamed Lu.

Her son had just wished her “Happy Mother’s Day” before his sudden death that day, she added. “Son, your spirit is in the heavens. Please tell Mama what happened. Mama will always be waiting for you at the school gate.”

A photograph of the mother sitting cross-legged in front of the school’s closed security gates, head bowed and holding a photograph of her son, spread across the Chinese internet. Many commenters noted the irony of the school slogan printed on the building behind her: “Seeking truth, seeking reality, pursuing kindness and beauty.”

It wasn’t the first time a Chinese student had died at school, only for parents to be told that surveillance footage — which is notoriously ubiquitous in China — was not available. In April 2020, a 15-year-old girl named He Zhu in Anhui reportedly died after falling off her school building.

The school showed her family a video of the girl chatting with classmates up to 10 minutes before the incident, but said footage of the fall was “unavailable for technical reasons,” according to local reports.

Her father, Hu Fuchang, 45, wrote on Weibo that his daughter’s teacher had called him to come to the school over accusations from classmates that she brought a cellphone to class. The teacher refused to let the daughter out when he arrived, saying she was still questioning the girl. She then left the girl in her office while she went to search the classroom for cellphones. When she returned, the girl was gone.

Hu was waiting for his daughter at the school gate when he saw ambulances rushing toward the campus. He ran inside with them and found her bleeding on the ground. The school said there was no surveillance footage of the teacher’s office and no recording of what had happened, though it issued a statement confirming the death and timing of the teacher’s questioning over the teenager’s cellphone.

“I keep being pressured and silenced by all kinds of forces. There’s no surveillance footage, no witnesses, no physical evidence,” the mother of the girl in Shandong wrote on Weibo. “All I want is the truth of how my child died.”

The lack of information surrounding Sunday’s student death in Chengdu sparked a flood of rumors and speculation online, including unproven accusations of mistreatment by teachers.

On Tuesday, a joint statement from the district propaganda department, education bureau and police stated that they had found no evidence of teacher misconduct at the school and that Lin Weilin had fallen from the roof after experiencing “personal problems.” Local police released another statement that night, stating that they’d found no criminal circumstances surrounding the youth’s death and that his parents did not object to their investigation’s findings.

Those statements only aroused more anger. Online, furious commenters demanded surveillance footage leading up to Weilin’s death. In Chengdu, dozens of mostly young supporters came to lay flowers at the school gate, only to be blocked by police, according to reporting on the scene by Hong Kong-based outlet Initium Media.

“The student dies an unclear death, the school disperses classmates and threatens them against speaking; the parents are heartbroken, sitting alone at the school gate,” Cai said. “Without justice or kindness, without even a hint of compassion, can this society still let people live?”

On Thursday, central state media stepped in. The Xinhua News Agency, the People’s Daily and CCTV all reported on Weilin’s death, publishing footage from surveillance cameras showing him walking up to the roof, including images of him holding a knife and cutting himself. The footage of him jumping was unavailable because there was no camera in that area, official media said.

The school hadn’t shown the parents the video initially because they handed it over to public security departments for inspection, Xinhua said, but Weilin’s father, a friend and a lawyer saw it Monday.

Xinhua said police had found suicidal messages in the teen’s personal messaging apps and a handwritten note addressed to a girl that said: “I’ve been crying three times a week lately, I’ve been on the roof, I’ve cut my wrists.”

Since then, nationalistic comments have surged on Weibo, criticizing the youth’s mother for “intentionally inciting online emotions” and accusing those who waved flowers of being “organized by foreign forces.”

“Your son committed suicide. As a family member you should ask yourself, did you ever care about your son’s mental health? Please apologize to the internet masses,” one user wrote on her Weibo.

The last image Lu posted on Weibo was a photo of her son in class, holding a certificate saying he was “No. 1 in chemistry” in his class.

“May you become a little sun, shining with light, with heat, with positive energy,” someone had written on the blackboard behind him in chalk.

His body was cremated Thursday.

Ziyu Yang of The Times’ Beijing bureau contributed to this report.