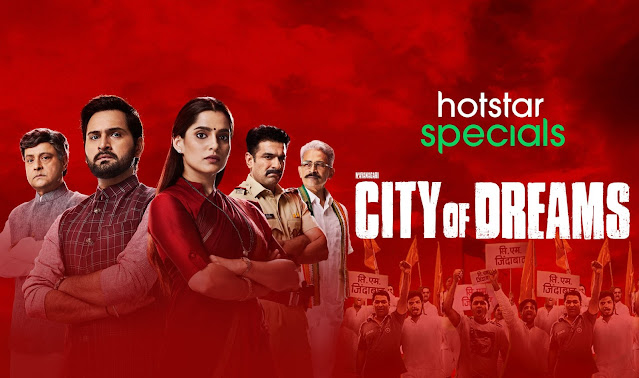 After
surprising everyone with a highly unpredictable opening season, full of twists
and turns, City of Dreams is back on Disney+ Hotstar with a considerably bigger
canvas for its second season. Now, the first season introduced us to the
powerful Gaikwad family. After Ameya Rao Gaikwad (Atul Kulkarni) was shot
thrice by unknown assailants in the middle of the day, a brutal fight ensued
between his son and daughter, both desperate to replace Ameya Rao. It ended
with the murder of his son, Ashish. Subsequently, his daughter, Poornima (Priya
Bapat), got appointed as interim Chief Minister of the state. But the wounded
patriarch disapproved Poornima’s ascension to power and threatened to kill her.
That’s where the first season had ended.

City of Dreams 2 picks up a
few months after the events of the first season. Even as Poornima continues to
dream about her dead brother out of pure guilt she is in no mood to give away
the power that she has wrested following a long struggle. With each passing day
she is becoming more and more seasoned (read manipulative). She may have been a
young upstart once but now she is a fast emerging grandmaster who seems pretty
sure about her every movie. Wasim Khan (Eijaz Khan), the encounter specialist,
who had helped her get rid of her brother, has been awarded with a party ticket.
The other players two have been maneuvered well on the chess board. Even her
brand of politics is far more inclusive than her father’s and so she naturally
appeals to the minorities unlike her father who practiced majoritarian politics
all his life.

Now, about 6-7 years ago, I
had gone to Bengaluru for a job interview and there in a local paper I came
across an article about Atul Kulkarni who had been working in Sandalwood
(Kannada Film Industry) at the time. Now, having seen him in films like Hey Ram and Rang De Basanti, I somewhere felt that the Mumbai industry had let
him down. At one level I was happy that finally he was getting his due while
working in Sandalwood. And yet a part of me was greatly disappointed wondering
why Bollywood often failed to nurture powerhouse performers like Kulkarni. Over
the years whenever he has been presented with an opportunity to showcase his
talent he has never disappointed. Had he been working in Hollywood he would
have already won at least two Academy Awards. That’s how talented Kulkarni
really is. Today, at last the web is doing some justice to his prodigious
acting talents. Now, Amey Rao Gaikwad isn’t an easy character to play but
Kulkarni makes it look so easy. What most people fail to realize is that in the
hands of a lesser actor, Amey Rao would have most probably looked like some caricature.
But Kulkarni makes the character look very real. Yes, Nagesh Kukunoor has given
the character a sort of a dated quality but Kulkarni makes Amey Rao look far
more realistic than say a Subhash Nagare (Sarkar) or a Baapji (Narsimha).

In many ways, City of Dreams
is as much about the rise of Poornima Gaikwad in politics as it is about the
rise of Priya Bapat in the OTT space. Prior to City of Dreams, Bapat’s work was
mostly limited to Marathi film and television. But it all changed after City of
Dreams. Since the first season of the Nagesh Kukunoor show debuted back in 2019,
Bapat’s popularity has grown considerably. Her reach is no longer limited to a
regional industry and today she enjoys a pan India following. Now, it’s usually
very difficult for an actor working in one of the regional industries to get a
powerful role like Poornima Gaikward. But the web makes it possible for creators
to try out new things and Bapat’s casting as Poornima has certainly proven to
be an inspired one. Another similar example that comes to mind is that of
Pratik Gandhi who was quite content with his work in the Gujarati film and
theatre before Scam 1992 established him as an actor with a pan India fanbase.

As for Bapat, there is no
denying that she has tremendously grown in confidence as a performer with the
success of City of Dreams and the confidence only seems to have rubbed off on
Poornima of City of Dreams 2 and it greatly works to the advantage of
Poornima’s character arc. Bapat gets great support from the rest of the cast.
Eijaz Khan deserves a special mention for bringing a new side to his Wasim
Khan. Big Boss seems to have done wonders to him, both personally as well as
professionally. Also, Sushant Singh is wonderful to watch as Anna. The veteran
actor succeeds in making the character look fiendishly menacing. Flora Saini’s
femme fatale is again fun to watch. Unfortunately, Nagesh Kukunoor doesn’t excite
us anymore the way he once used to. City of Dreams 2 is far from being his best
work but the brilliant performances on offer make it binge-worthy.

A version of this review was first published in The Daily Guardian.