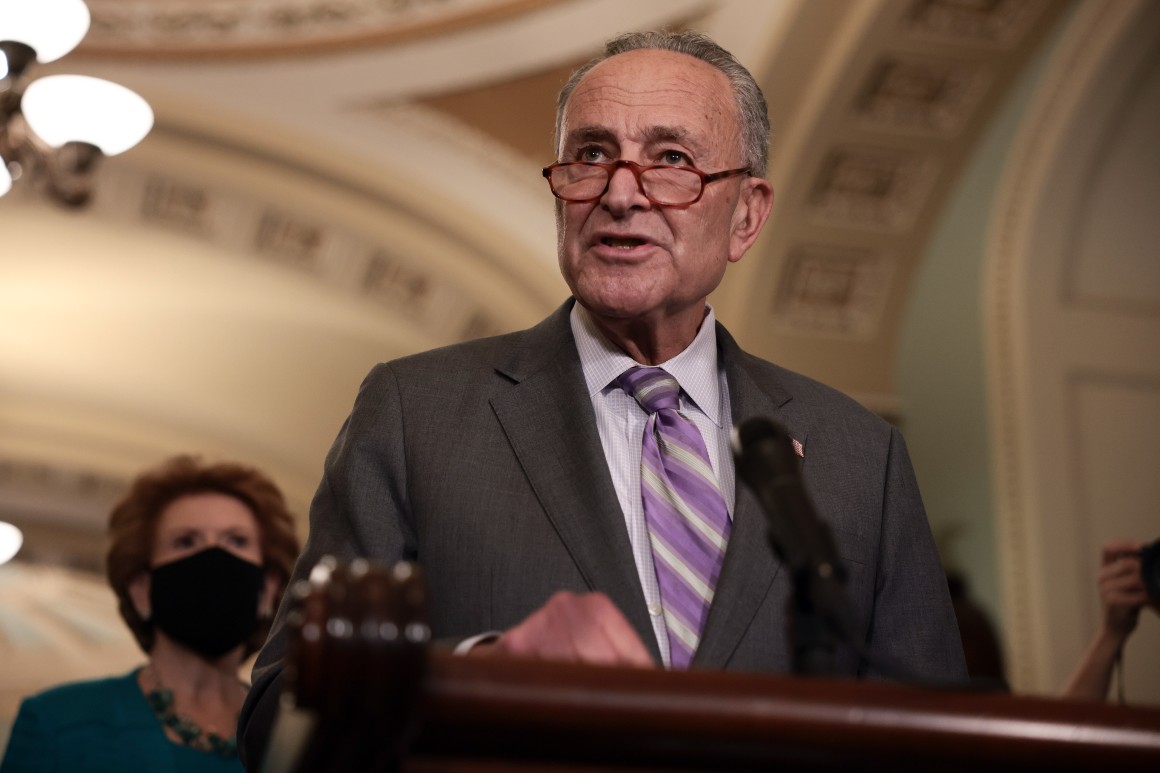 “We’re unfortunately set up for another — frankly, steeper — cliff. And it’s not my preference,” said Rep. Elissa Slotkin (D-Mich.). While she doesn’t want to set the precedent of bailing out the minority party from addressing the debt ceiling, Slotkin conceded reconciliation “may end up where it is.”

That’s news to most Senate Democrats not named Joe Manchin or Tim Kaine, two outliers in an upper-chamber caucus that is resolutely opposed to tackling the debt without GOP votes through reconciliation. There’s a growing clamor to change Senate rules to hamstring minority-party influence over the borrowing cap, which Manchin currently opposes. And the reality among Democrats’ thin majorities is that while all corners of the party are worried about the next conflict, no one knows how it will play out.

Sen. Jon Tester (D-Mont.), a centrist like Murphy, said Schumer’s message to McConnell should be simple and consistent: “You want to play those goddamn games with the economy? … It’s on you.”

“I am strictly opposed to it being done on reconciliation. I think it’s stupid. I think it’s bad,” Tester said in an interview last week ahead of the debt ceiling compromise. He added that “the problem with the filibuster exception is, for all intents and purposes, the filibuster would be done” if a debt carve-out were created.

“And the second thing is, you still have a Manchin-Sinema problem” with getting 50 votes to change the chamber’s rules, Tester said, referring to Sen. Kyrsten Sinema (D-Ariz.).

Democratic leaders hate the idea of using reconciliation for the debt cap for two main reasons: because that’s what McConnell wants and because it would set a precedent for future majorities to raise the ceiling on their own. Future Republican majorities would undoubtedly struggle to avert default with only GOP votes under that precedent, given their party’s divisions over the issue.

McConnell said he will not help Democrats again in December; he barely provided 11 votes to advance a debt ceiling increase and faced major blowback within his conference for offering Schumer a last-second lifeline. That leaves Democrats without a solution to what will become their biggest problem in two short months, a headache intertwined with their mad dash to finalize President Joe Biden’s domestic agenda and keep the government funded.

Among House Democrats, there’s some fatigue over being caught between Schumer and McConnell. Speaker Nancy Pelosi has not ruled out using reconciliation to address the issue, and her No. 2, Majority Leader Steny Hoyer, said this week he supports the idea.

Most House moderates have been clear from the start about their main goal in concluding the debt drama: voting only once to end the crisis. The opposite has happened.

First House Democrats passed a government funding bill that also raised the debt ceiling through the midterms, which McConnell rejected. Then they passed a clean debt ceiling increase that Republicans were set to filibuster but ultimately not forced to reject.

In the end, House Democrats had to eat a short-term extension — and a guarantee they will have to revisit an issue that may very well show up in midterm attack ads as Democrats seek to add another big spending bill dealing with climate change, child care and education priorities.

“For frontliners, it’s almost a lose-lose situation to have to take that vote at the end of the year,” said retiring centrist Rep. Filemon Vela (D-Texas), describing the plight the debt ceiling puts endangered Democratic incumbents in. “You’re damned if you do, damned if you don’t.”

In the House, raising the debt ceiling may be hard politically, but it’s relatively easy legislation to pass — even if the party uses reconciliation. The House can pass it by a simple majority under normal circumstances and avoid handing the GOP too much procedural leverage, even under the arcane rules of the budget process.

Even the most squeamish centrists would cooperate, in part because of a late-September deal with Pelosi’s leadership team, which assured that they would tackle the issue of debt in a future vote.

But Senate Democrats must tangle with the filibuster if debt ceiling legislation is passed through regular order, giving Senate Republicans sway that their House counterparts lack. And if Democrats used reconciliation, then their party’s senators would be subject to an agonizing floor debate that includes an unlimited vote-a-rama — all to set a precedent of raising the debt ceiling on party lines.

That’s led Democrats to mull a rules change, or even the elimination of the debt ceiling altogether. As Sen. Richard Blumenthal (D-Conn.) put it: “A jerry-rigged temporary solution shows how necessary a permanent fix is.”

“There was a recognition from all Democrats that this was different,” said Sen. Mark Warner (D-Va.). The party is gobsmacked, he added, about “the idea that you would even have a filibuster on something that’s purely process.”

Yet Manchin says he can’t be moved on the filibuster, even when it comes to the debt limit. Sinema has not said publicly where she stands but has thus far opposed all changes to the 60-vote threshold required for the chamber to pass most bills. That leaves Democrats short of the votes to change the filibuster rules, though McConnell is monitoring the two moderates closely to make sure they don’t wobble.

In the interim, the only offer McConnell has for Democrats is to use the next few weeks to prepare a long-term debt increase and pass it in December.

He’s “giving the Democrats the time they’ve asked for. Their only argument for not doing this through reconciliation is they didn’t have time, too many hurdles. Now they have plenty of time,” said Sen. John Barrasso (R-Wyo.).

The problem? Senate Democrats say they aren’t going to use their newfound breathing room to work on the debt ceiling, even as more House Democrats hint they’d be fine with acceding to McConnell.

Instead, Senate Democrats say they’re focused on clinching a deal on Biden’s social spending bill. But negotiators remain far apart on even a topline agreement, as lawmakers openly war with each other over both the size and scope of the social infrastructure package.

That might leave a second last-ditch Band-Aid as the best cure for another threat of default.

“My fear is that’s what’s going to happen,” said Sen. Mazie Hirono (D-Hawaii). “My hope is that it doesn’t.”