In Cerebrum, a man who volunteers as a guinea pig at a home-based lab, but when he commits a crime he cannot remember, he must risk his own sanity to reveal the truth.

Ahead of the film’s premiere at WorldFest in Houston on Sunday, we caught up with director Arvi Ragu to talk about advances in technology, the tone of the film and whether the pandemic affected its release.

The film was shot before the pandemic, was that right? so you weren’t affected?

That is correct, we wrapped up principal photography in 2019, prior to the pandemic’s breakout.  There were some constraints during post-production, as I was unable to sit side-by-side with my editor and sound mixer but, thanks to Zoom, we collaborated remotely.

Did you decide to release the film now, while most are still at home, though?

That was not the intent when we started post-production but the timing might work out well for us.  With everyone now going digital for school, work, parties, visits with family and friends, etc., I hope the concept of digital memory resonates with the audience.

Are you excited about the release? How close to it are you? Is it like a child you’re sending out into the world?

Let me tell you about a particular Independent filmmaker I know.  😉  I am involved 24/7 with Cerebrum’s release.  As producer and director, my role now is to coordinate with the PR and marketing teams to release content, interact with actors and fans on social media, prep deliverables for sales agents and distributors, and send updates to Investors and friends.  A lot is going on, but I enjoy the buzz.  Reminds me of heady days readying my child to take off for college – I am excited and nervous all at once.

What was it about this particular project that appealed to you?

Apart from being so very invested in “my baby,” Cerebrum appeals to me, the movie fan.  Despite such close proximity to it, the story still touches and intrigues me.  It is heartwarming and relevant. 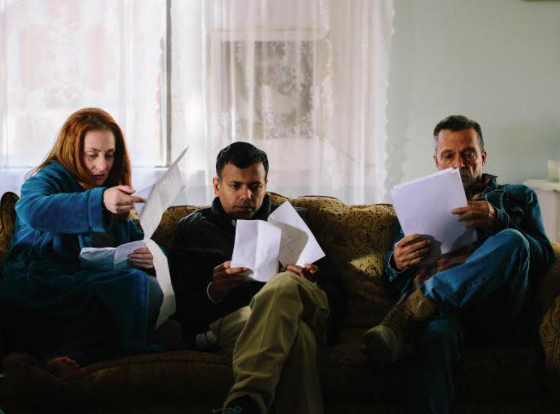 Set the tone for us?

Cerebrum is a science-fiction thriller about a guy who volunteers to test emerging memory-transfer tech.  When he commits a crime he cannot remember, he risks his sanity to expose the truth. The film is three layered.

Subtlety and innuendo niche themselves between the layers throughout the movie.

Was there a checklist of things you HAD to have in the film?

Knowing Cerebrum was something I would produce and direct, I kept in mind a few constraints: First, it had to be sci-fi ( I am a geek, after all.); second, the story had to take place in limited locations with a limited number of characters (That’s me wearing the producer’s hat.); and finally, I’d have to get by with minimal CGI (That’s the director’s hat on my head.)  At the story level,  I needed an ending that would grip audiences and stick with them for days.  Also, I wanted to stay away from the typical blue-grey color palette that’s used in every single sci-fi movie these days.  I didn’t want my characters to walk around in all white PPE either!  Some grunge is good.

It is comforting to see people covering the movie, and genuinely getting behind it?

Movies are not made simply to self-fulfill.  They are made for others to enjoy and to be moved in some way.  To reach that communion with audiences, movies must provide solid and impartial coverage.  Reviewers who understand the filmmaker’s struggle especially appreciate a well told story.

What do you think – will we all, at some time, be watching films on VOD only?

Remote work, remote school, and VOD-only movies were supposed to happen in 2030 or beyond. Covid fast-forwarded everything.  Watching movies on demand in the comfort of your own home is definitely appealing.  Additionally, you can spontaneously catch a limited-run or indie movie that you set your heart on and avoid settling for limited options at local theaters.  You can also watch movies that push boundaries (sex, violence, what have you) without worrying if you are going to run into Uncle Bob.  But I would say not all movies are going to be VOD only.  A purpose still exists for state-of-the-art movie houses.  Watch a Christopher Nolan production enhanced by all that audio and visual tech and you’ll know what I mean.  The big-screen experience will become more novelty than norm, but it should be around for a long time.

This is a ‘smart genre film’ – was it important that you had a movie that was visually arresting, with a high-concept, but also is grounded in somewhat of a real reality?

Cerebrum audiences should walk away believing, or at least considering, the viability of memory backup as we present it in the film.  To achieve that end, we wove the science-fiction story elements with real-life struggles of Everyman.