Skip to Content
Home Movies Dream Vignettes: An Essay – A Potpourri of Vestiges


In regular film or TV if impossible or improbable events
occur, or people behave out of character, more often than not a character wakes
up sweating profusely and we realize it was only a dream sequence. One can
usually sense something is amiss as the events unfold in the dream. The movie
version of the short story by James Thurber, The Secret Life of Walter Mitty
(2013) directed by Ben Stiller uses this intuitive feeling to great effect.

Walter, played by Stiller himself, is prone to frequent
bouts of day dreaming. In his dreams he is far removed from his diffident
personality; he is assertive, taking on his unpleasant superior in one fight
scene which would be at home in a Marvel movie. His outlandish dreams are more a
wish fulfillment, contrasting with his seemingly uneventful life.

However, as the story progresses, the movie itself takes on
a dream-like quality. As Walter sets off to Greenland in search of a film
negative, his job at stake, doubts began to creep within me. At several
instances I found myself wondering whether what I was watching was real or just
another of Walter’s daydreams.

In Greenland, he’s about to give up on the search for the
negative when he slips into a daydream where his love interest played by Kirsten
Wiig pops up and spurs him to go off on the big adventure with an effective
rendition of the haunting ballad Space
Oddity.

He finds himself travelling on a ship, escaping on a
longboard from a volcano in Iceland and playing football with locals in the
Himalayas. As his actual life becomes something out of a dream, his day-dreams
recede. Stark scenery filmed in long shots and the slightly off-kilter nature
of his travels create an unreal effect. In dreams, abrupt changes in locations
are quite normal and barely perceptible. The changing landscapes in Walter
Mitty produce a similar impression. The editing also bolsters this feeling. It
becomes difficult to gauge just how much time has elapsed between his travels.

Three very different kinds of movies have much to say about
their leading ladies through dream sequences. The Spiral Staircase (1946)
directed by Robert Siodmak, is an atmospheric thriller centered on Helen McCord
(Dorothy McGuire), a live-in attendant at Warren House. She is afflicted by a
temporary loss of speech following a childhood tragedy. The dream sequence in
question revolves around her wedding to Dr. Parry, her fiancé. 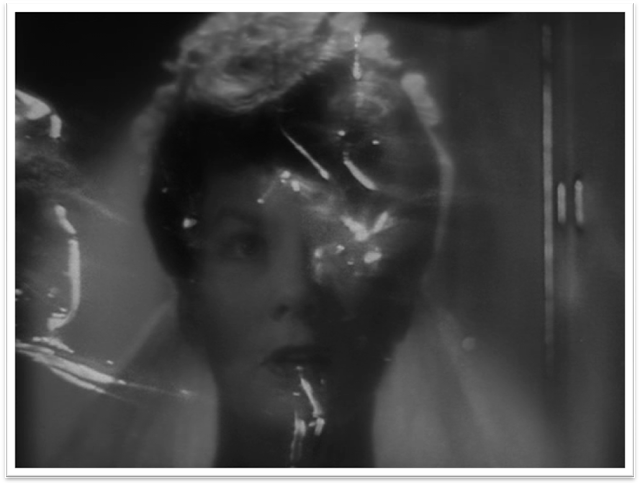 The idyllic atmosphere changes to one of menace when the
vicar presiding over the ceremony prompts Helen to say “I do”. The phrase
signifies a promise to uphold the wedding vows. Her distress over her inability
to utter the words is palpable. The flock of wedding guests now possesses the
tinge of a mob. The statue holding aloft the lamp fixture in the upper left
corner bears a faint resemblance to Lady Justice. Together, the accusatory mob
and the statue lend the flavor of a court proceeding to the image. The sequence
ends with a close-up of Helen, agony writ large on her face. Siodmak, who had
received training in the German Expressionist style, fuses the trope of the
dream sequence with Expressionism to bring forth Helen’s anxiety and self-perceived
guilt or shortcoming about her lack of voice.

I Know Where I’m Going
by the British filmmakers Michael Powell and Emeric Pressburger, who were aka
The Archers, came only a year earlier
than The Spiral Staircase. The romantic film too, is strongly centered on its
heroine Joan Webster (Wendy Hiller). She is an ambitious young Englishwoman who
is off to the Hebrides in Scotland to marry a much older and wealthy fiancé. A
delay in her journey due to the elements leads to a gradual erosion of the belief
in her plan; her marriage is but a means to live the comfortable life she so
covets. 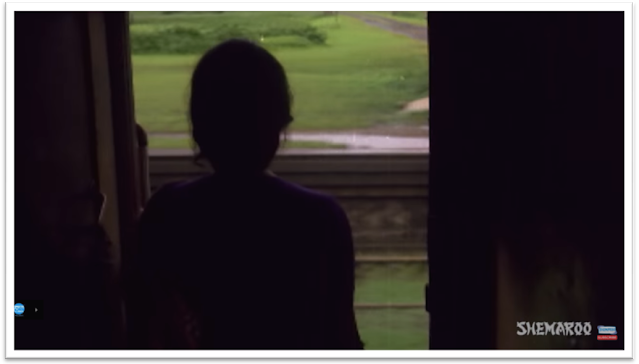 The dream sequence takes place on the night of her train
journey. It too features a wedding, but the mood is cheerfully crazy. She is
seen exchanging vows grimly with her betrothed’s Consolidated Chemical Industries,
represented by giant spinning wheels. Her swift “I do” is reciprocated by the
mournful hooting of the train horn which only increases the ludicrous mood. The
ceremony is shown through the now empty transparent cover of her wedding dress.
The cover is both a visual and verbal metaphor for what her marriage to a
fiancé she doesn’t particularly adore could turn out to be: hollow and a facade.
A smile is plastered on her sleeping form as snatches of dialogue (“Charged to
your account madam”) indicating luxury filter in. The tempo of the background
music increases by the repeated utterance of phrases (“Everything’s arranged”)
in an urgent tone to generate a feeling of claustrophobia as if Wendy’s trapped
in some predicament. The repetition of phrases to generate a particular mood is
in a similar vein to that of “I do” in Helen’s dream. Thus while showing
Wendy’s state of mind, Powell and Pressburger also plant subtle clues which
belie the ongoing narrative.

A train dream of another kind kicks off Basu Chatterjee’s
serene dramedy Rajnigandha (Tuberose) (1974).
Deepa (Vidya Sinha), from whose perspective we see most of the movie,
finds herself in an empty train compartment. Afraid, she yanks the chain to
stop the train only for it to fall into her hand. The long empty passage
radiates menace. Beads of sweat trickle down Deepa’s forehead. Eventually the
train pulls up to a station where she gets down. Looking around at the deserted
place, she starts pursuing the departing train in its wake. With outstretched
hands, she desperately tries to get a hold on to the train. Mysteriously, the
train now appears to be full of passengers, mocking her attempts. She stumbles,
the non-diegetic sound evoking images of rotating fractals which performs a
role not unlike those of the phrases “I do” and “Everything’s arranged” in the
previously described dreams; they emphasize the otherworldly nature of dreams.

Deepa alludes to missing the train or stumbling before a taxi
in recurring dreams. At the risk of reading too much into the wordless dream
sequence, one can see how it summarizes the central dilemma of Deepa. In the
first half of the movie, she appears to have a nice stable long-term courtship
with Sanjay (Amol Palekar) and they weave dreams of marriage. Sanjay risks
Deepa’s ire with his inattentive and forgetful behavior at times. But he always
manages to soften her anger with his winsome personality. When Deepa arrives in
Mumbai one day for a job interview, her past in the form of Navin (Dinesh Thakur), causes her to take a detour from her
planned life. Navin, quiet, gallant and mysterious presents a stark contrast to
Sanjay. She comes to believe that Navin was her true love all along and she is
ready to forsake Sanjay. However, a key letter and the timely appearance of
Sanjay avert a disaster of sorts. This time unlike her dreams she’s back on
board the train, despite the stumble on the way.