Erika Jayne objected to the sale of her $16 million Pasadena home in court last month but unfortunately for the Real Housewives of Beverly Hills cast member, her request was not fulfilled.

After Erika attempted to stop the home from being listed as part of the ongoing bankruptcy proceedings against her and her now-estranged husband, Thomas Girardi, and claimed she should be given a $600,000 cut from the potential proceeds, powerful evidence against her has surfaced as trustees prepare to put the property on the market.

“Breaking: In connection with an opposition to [Erika Jayne]’s request to get a part of the $600,000 exemption from Tom Girardi’s house, a lender has provided damaging signatures showing her direct involvement in the borrowing by [Tom] and this will become powerful evidence against her in any future case if she tries to claim she didn’t know what was going on,” attorney Ronald Richards revealed in a series of tweets shared on April 6.

“These purportedly signed documents would undercut that position,” he continued. “She was assisting in the loan and in fact, gave a priority to the lender over her own personal assets.” 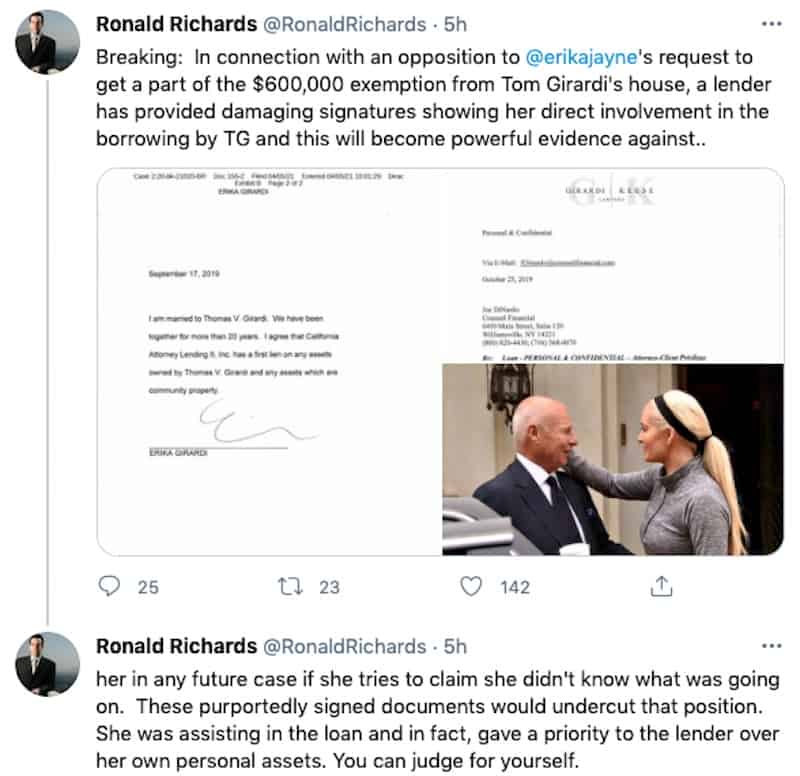 When a RHOBH fan then asked Ronald to explain what he was saying to those who aren’t privy to legal lingo, he added, “She may claim she didn’t know Tom was broke or borrowing a lot of money but this negates any innocent housewife defense.”

In another Twitter post shared over the weekend, Ronald confirmed Erika and Thomas’ former marital home would be hitting the market for just $13 million.

“This just in. Erika and Tom’s residence is approved to hit the market for $13,000,000 with a 4% commission. This is much lower than what was previously valued,” he stated. “Before lenders, we are at net of $12.5M and that is a generous price. Girardi will be evicted soon as they will price.” 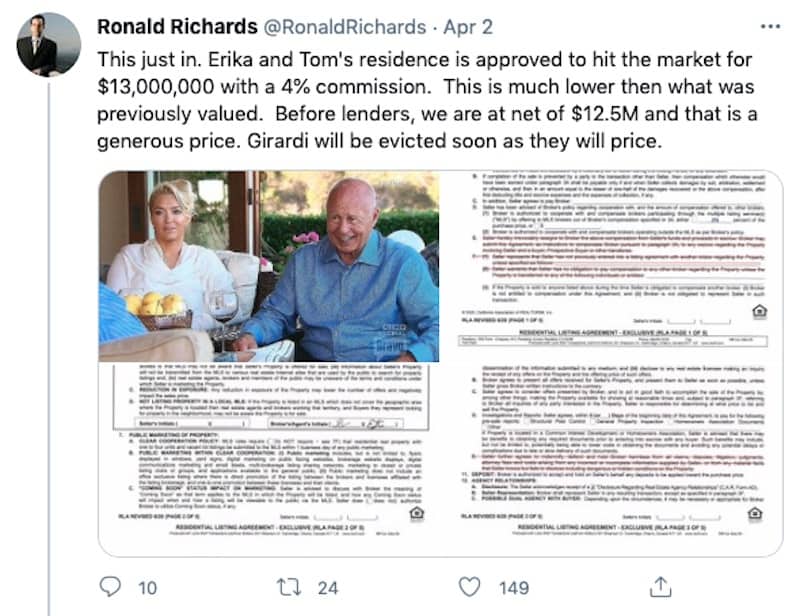 “The key takeaway is now that the listing is authorized, it should be in escrow quickly in this hot [southern California] real estate market,” Ronald added.

Erika and Thomas are currently being accused not only of embezzling millions of dollars from his former clients, but also of owing millions in back taxes and stiffing other lenders.

The Real Housewives of Beverly Hills season 11 is expected to premiere sometime later this spring or summer on Bravo.