The Marvel Cinematic Universe shows no signs of stopping soon, and with the Infinity Saga over, the studio has been rolling out Phase 4. This new phase, stocked with new and old characters and various TV shows as well, is already very different from Phases 1-3. The MCU as it’s known began in 2008 with Jon Favreau’s Iron Man, which introduced Robert Downey Jr. as Tony Stark and set the tone for what was going to become an extensive universe of Marvel characters. Since then, the MCU has released almost 30 movies, with a lot more planned.

The first three phases of the MCU focused on introducing the characters that would lead the Infinity Saga on their quest to stop Thanos (Josh Brolin) from acquiring all the Infinity Stones. After the Avengers teamed up (and later the Guardians of the Galaxy), the MCU reached its peak with Avengers: Infinity War and Avengers: Endgame, which saw all the characters joining forces to stop Thanos.  Since the conclusion of the Infinity Saga, the MCU has continued to twist and turn, with Loki destroying the Sacred Timeline in his titular show, Scarlet Witch’s chaos magic reaching its full potential, Spider-Man: No Way Home cracking open the multiverse ever so slightly, and Doctor Strange in the Multiverse of Madness exploring its broader ramifications. And this is only the beginning.

Phase 4 and beyond will bring new characters from Marvel Comics to the big screen and will also continue telling the stories of those who have only had one or two solo movies so far. But in many ways, it will also be very different from what Marvel’s Phase 1, 2, and 3 did. That doesn’t mean it will be bad, though – on the contrary, Phase 4 will bring a lot of interesting content, both on the big screen and TV, even if their release dates have been a bit messy due to the coronavirus pandemic. Here’s every way the MCU’s Phase 4 will be different from Marvel’s previous phases.

A Year Without New MCU Releases

Marvel Studios has consistently brought at least one movie every year since Iron Man’s release in 2008, with the only exception being 2009, as The Incredible Hulk in 2008 to Iron Man 2 in 2010. As the MCU was still taking off back then, it’s understandable that 2009 saw no Marvel movies. After that, however, Marvel Studios has reliably churned out at least one superhero movie every year. The most productive years for the MCU so far have been 2017 (Guardians of the Galaxy Vol. 2, Spider-Man: Homecoming, and Thor: Ragnarok), 2018 (Black Panther, Avengers: Infinity War, and Ant-Man and the Wasp), and 2019 (Captain Marvel, Avengers: Endgame, Spider-Man: Far From Home).

2020 was supposed to see the start of Phase 4 with Black Widow, but the coronavirus pandemic put an end to those plans, pushing the official start of Phase 4 all the way back to the summer of 2021.  The MCU has since picked back up, of course, but the logistical and storytelling effect of a year without Marvel movies was still significant. In fact, it continues to be felt.

As a result of the pandemic, the MCU’s Phase 4 will now see a lot of new movies and TV shows released in a shorter span than in the previous phases. 2021 saw Black Widow, Shang-Chi and the Legend of the Ten Rings, Eternals, and Spider-Man: No Way Home. 2022 will return to the Marvel pattern of three movies a year with Doctor Strange in the Multiverse of Madness,  Thor: Love and Thunder, and Black Panther II. If Marvel’s release slate stays as it is currently, the same will hold true for 2023.

In addition to that, the MCU is finally embracing TV shows, and while Netflix’s Marvel shows were set in the same universe as the movies, they were ultimately separate entities, with the movies never even acknowledging them. That’s also changed with Phase 4, as Kingpin and Daredevil crossed into the MCU with Hawkeye and No Way Home, and Netflix’s many Defenders series have been added to Disney+. As for the new MCU shows, they’ve become significantly more important to the universe’s overall storyline than before, with Loki and WandaVision serving critical roles in setting up Doctor Strange in the Multiverse of Madness, for example. The upcoming Marvel Disney+ shows like Ms. Marvel, She-Hulk, and Secret Invasion will likely tie in closely as well.

Each of the previous MCU phases saw at least one Avengers movie, with Phase 3 housing the two biggest movies not only of the Avengers franchise but the Infinity Saga in general: Avengers: Infinity War and Avengers: Endgame. With the original team now done, there’s hope for the remaining heroes to team up at some point, more so now that the MCU has characters like Captain Marvel and Spider-Man. However, there are no plans for a new Avengers movie as part of Phase 4, which instead focuses on introducing new characters and giving new adventures to its already established heroes.

No Iron Man or Captain America

The Infinity Saga told the origin story of its biggest heroes, but only two got a full journey that came to an end in Avengers: Endgame: Iron Man and Captain America. These two characters became the leaders of the first three phases of the MCU, so much that they ended up clashing in Captain America: Civil War, and didn’t team up again until the time heist happened in Endgame. Phase 4 will be the first with no Iron Man and Captain America (Steve Rogers) in lead roles, although their legacies do continue to be felt.

The first phases of the MCU introduced the heroes that would lead the Infinity Saga, but not all these origin stories happened in the same phase. Phase 1 saw the introduction of Iron Man, Hulk (initially played by Edward Norton), Thor, and Captain America, as well as the first Avengers movie; Phase 2 welcomed the Guardians of the Galaxy and Ant-Man; and Phase 3 was in charge of adding Spider-Man, Doctor Strange, Black Panther, and Captain Marvel. Phase 4’s only new characters with their own movies have been Shang-Chi and the Eternals, but the Disney+ shows are a different story.

The new characters arriving in the MCU’s Phase 4 are Marc Spector/Moon Knight (Oscar Isaac), Kamala Khan/Ms. Marvel (Iman Vellani), Jennifer Walters/She-Hulk (Tatiana Maslany), and Maya Lopez/Echo (Alaqua Cox). This means Phase 4 is introducing the largest number of new headline characters yet. Other important heroes like Hawkeye‘s Kate Bishop and Doctor Strange 2‘s America Chavez don’t have their own shows or movies (yet), but they will also be big players moving forward.

The Sony Spider-Verse Being Part Of The MCU (Sort Of)

With the release of Venom: Let There Be Carnage and Morbius, Sony’s MCU Spider-Man connection has actually become more tenuous, but the franchises are still slightly linked through the multiverse. Thanks to the botched spell from Spider-Man: No Way Home (which is firmly in the MCU), Tom Hardy’s Venom was transported to the Tom Holland timeline briefly in some post-credits scenes, and the MCU’s Vulture traveled to the Venom/Morbius timeline to interact with the latter, also in a credits scene. Moving forward, however, Tom Holland’s Spider-Man is unlikely to interact with Sony’s villains unless another multiverse event occurs.

The X-Men Universe Being Canon

The X-Men franchise’s connection to the MCU is also a bit wobbly, and the mutants probably won’t debut in full during Phase 4, but Professor X’s appearance as part of the Illuminati in Doctor Strange in the Multiverse of Madness means that Marvel Studios now has the perfect opportunity to introduce its own X-Men. Because the Charles Xavier that Doctor Strange and Wanda have to face is from Earth-838 and not Earth-616 where the MCU is set, the MCU’s X-Men aren’t going to be exactly the same as the familiar Fox characters. But the existence of a Charles Xavier variant in another universe means that there could be one in Earth-616, too, and the X-Men have been confirmed to appear at some point by none other than Kevin Feige.

The Multiverse Being A Huge Problem

The Ancient One warned of the dangers associated with timeline tampering back in Avengers: Endgame, but Phase 4 is where the multiverse problem has really kicked off. Loki introduced the concept of the Sacred Timeline upheld by the TVA and He Who Remains, but this balance was shattered by Sylvie in the end. Not only has this unleashed Kang the Conqueror, but also the multiverse. Spider-Man: No Way Home showcased what havoc only a small dose of multiversal chaos could wreak, and Doctor Strange in the Multiverse of Madness has greatly expanded upon this. Storywise, the multiverse’s impacts on Phase 4 and beyond could be endless, and it also poses the logistical challenge (and opportunity) of re-casting familiar characters as variants and bringing in previously-unrelated IPs like Fantastic Four and X-Men.

Related: Who Will Be Reed Richards In The MCU Fantastic Four?

Finally, Marvel’s Phase 4 has also been introducing gods at a much greater rate than previous phases, and it will continue to do so with Thor: Love and Thunder. Eternals introduced the Celestials, which are one of Marvel’s oldest and most powerful god-like races. Moon Knight debuted a significant pantheon of Egyptian deities including Khonshu, and Thor: Love and Thunder will feature the gods of Olympus in addition to the familiar Asgardians. Of course, Christian Bale’s Gorr the God Butcher could eliminate a significant number of gods in Thor: Love and Thunder, but the uptick in the MCU’s deity count thanks to Phase 4 is still certainly worth noting.

For all these reasons and even more to come, the MCU’s upcoming Phase 4 slate will look and feel very different to its predecessors. Both narratively and logistically, things will have to change as the universe gets bigger and the studio continues to adapt after the pandemic’s initial blow. This won’t be a bad thing, however, as it will bring a lot of new characters, stories, and concepts to this exciting new era in the MCU.

Next: Guardians Of The Galaxy 3 Is Already Continuing One Huge Phase 4 Trend

Adrienne Tyler is a features writer for Screen Rant. She is an Audiovisual Communication graduate who wanted to be a filmmaker, but life had other plans (and it turned out great). Prior to Screen Rant, she wrote for Pop Wrapped, 4 Your Excitement (4YE), and D20Crit, where she was also a regular guest at Netfreaks podcast. She was also a contributor for FanSided’s BamSmackPow and 1428 Elm. Adrienne is very into films and she enjoys a bit of everything: from superhero films to heartbreaking dramas, to low-budget horror films. Every time she manages to commit to a TV show without getting bored, an angel gets its wings.

When she’s not writing, you can find her trying to learn a new language, watching hockey (go Avs!), or wondering what life would have been like had Pushing Daisies, Firefly, and Limitless not been cancelled. Breakfast food is life and coffee is what makes the world go round.

Guillermo del Toro said “hi” to her once. It was great. 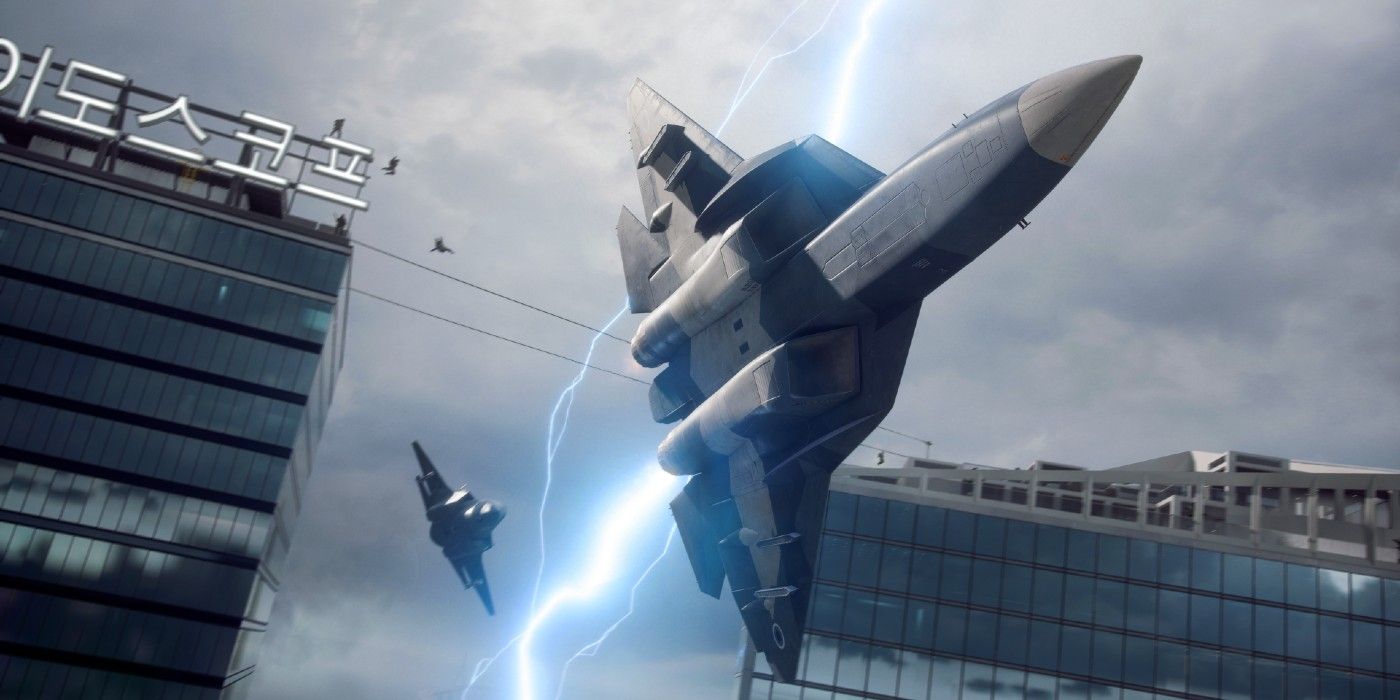