Skip to Content
Home Movies Fantaspoa 2021 Review: NOCTURNA: SIDE A 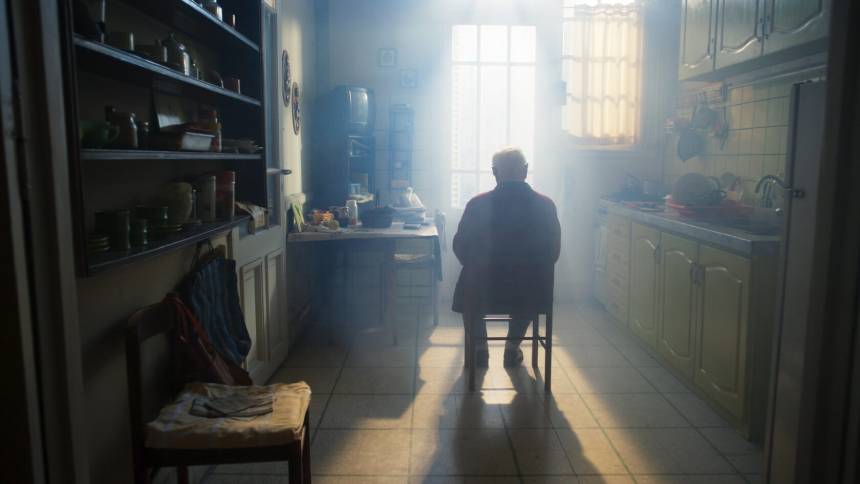 Ulysses is a hundred-year-old man living with his wife, Dalia, in their Argentine colonial apartment. This is the last night of his life and Ulysses will start to experience frightening events in his apartment and throughout the building. They are events that will force him to rethink past decisions, his present circumstances and his view about his reality.

Let’s start by getting this out of the way first. There is a certain point in Gonzalo Calzada’s drama thriller Nocturna: Side A – The Great Old Man’s Night, which may be different for everyone else, where you will say to yourself, ‘Okay. I’m going to cry during this movie, aren’t I?’. And that is okay. For me it happened around the half hour mark, where my expectations for a supernaturally charged mystery were not being fully met. With the flick of a switch I realized my expectations, based off of Calzada’s previous horror films, were wrong and I understood what his intentions really were. From there I was fully invested in Ulysses’ story and his journey into eternal night. By then Nocturna had its hooks in me and I began blubbering into my t-shirt.

At the beginning of Nocturna pay attention to words of the narrator of a nature program that is playing on the television in the background. If you miss it it will come back at the end to remind you again. It may be something so easy to dismiss but it is not without purpose and rightly explains what Ulysses himself is experiencing on his last night.

Nocturna is led by Argentine actor and playwright Pepe Soriano, and actress Marilu Marini. As Ulysses, Soriano masters a role that requires a balance of fragility, despair, sorrow and loss. As his wife Dalia, Marini is the embodyment of all his internal fears and struggles, such as the fears of losing his agency and control over their lives. Then there is the fear that past decisions are irrevocable. Calzada regular Desirée Salgueiro is their troubled neighbour from the floor above them, Elena. She is the source of the nightmarish happenings and the external force adding pressure to an already tense situation. Lautaro Delgado’s role of the building superintendant Daniel is minor but rounds out the main cast.

As said above themes in Nocturna include loss of freedom and independance, threat of the loss of autonomy. All serve as motivators, so much that Dalia convinces Ulysses to never open their door to anyone, even if to help them. Ulysses and Dalia always feel threatened. They fear that they could lose their apartment if someone comes in and sees that it is dirty, proof that they are unable to care for themselves. Then there is the physical and mental deterioration that comes with old age. Very few horror thrillers elderly-centric. In his film, Calzada has taken natural fears that come with growing old and antagonized them with supernatural ones.

I had mentioned at the beginning that the supernatural elements did not exactly float my boat. That’s not to the film’s deteriment to be fair. After all, these elements are not meant for us. These are Ulysses’ experiences that push him towards reconciliation and seeking forgiveness for his past transgressions. Calzada employs familiar tricks of the trade. In their own right they are cool, disruptive and unsettling even. But these are not meant to be stunt scares, they serve a greater purpose than to just make you jump in your seat.

From an esthetic stance Calzada’s filmmaking is on point here. Together with his regular cinematographer Claudio Beiza they make wonderful use of light intensity and the beautiful interior of the old conlonial style apartments, their design and chamber-like qualities. For example, very often Calzada uses something as simple as shooting through the beveled edges of glass panes in the doors, refracting images, creating dream like sequences, even skewing reality. It’s not overly stylistic but it ain’t bad to look at either.

Few horror thrillers have struck an emotional chord like Nocturna has. I was not expecting to be impacted this much by the film. If we are staying within the lines of Spanish-speaking genre cinema Nocturna never strives to hit the horror heights of early Del Toro or of his heir apparent Issa Lopez and her film Tigers Are Not Afraid. However, it’s emotional resonance may even exceed the whallops that those two directors have had us endure over the years.

Now, if you will excuse me, I have to call my Nana.

Nocturna: Side A – The Great Old Man’s Night