As she walks me through her days on the Atlantis-like FBoy Island, Nikki Glaser can’t stop using the word “great.” Residing on the archipelago, as teeming with crypto bros as it may be, is a “great, great life.” The comedy-heavy production team is “great.” The trio of girls at the helm of the show? Also “great.” Hell, even the FBoys themselves can be great. Emphasis on the can, because most of the time, they’re as manipulative as Mark Zuckerberg on FBoy steroids.

And she’s right. While Glaser has done a slew of great things in her life (judged RuPaul’s Drag Race, roasted Alec Baldwin on Comedy Central, and a few hilarious specials, including a new one dropping on HBO Max later this week), it’s easy to see why she’d call hosting FBoy Island the greatest thing she’s ever done. That’s because the show is the greatest thing anyone’s ever done.

Sure, Michelangelo painted the Sistine Chapel. The Wright Brothers discovered a way for humans to take flight. Shakespeare wrote all those plays. But none of them coined the phrase “FBoy, F-BYE!” None of those men were wise enough to jumble a dozen of the douchiest hot guys and a dozen sweet boys together and disperse them among three charming young women. Nor did they think to make these guys compete for $100,000 under bizarre romantic circumstances.

But FBoy Island is more than just a dating game. Loaded with so many twists, FBoy Island feels like a new competition with each new episode. (Players can return after they are eliminated, if they escape the purgatorial “Limbro.” In this season, a shocking amount of returning players make their way back into the game. There’s more, but we won’t spoil.) And yet, with a purposefully hokey tone in every episode, watching FBoy Island feels as goofy as watching your friend, incredibly intoxicated, trying to flirt with the most beautiful human being on the planet.

Glaser loves that the show is so fast-paced, breezing past the boring men to focus on the toxic or overly-ambitious ones instead.

Glaser compares the show to a zoo. Here’s her theory: If you put a male panda and a female panda in an enclosed space, by nature, they’re going to have sex. What you’re seeing at the zoo is, indeed, real panda sex—as opposed to staged panda sex, I guess?—but it’s only because they’re the only pandas in a 100-mile radius.

“I realized during the first season that this is real. These people cannot be that good of actors,” Glaser says. “The trickery is that you get people on an island, only hanging out with guys that they might like, then they’re only talking to producers about those guys, and they don’t have phones to do anything else. You’re going to fall in love.”

Thanks to the reality of it all, Glaser also figures that she’s found herself a “shortcut” in the entertainment industry. On top of relaxing at a new paradise each season (Season 1 took place in the Cayman Islands; now we’re in Cabo San Lucas), Glaser also isn’t caught up in completing retake after retake to get the perfect shot. Screw the Oscars!

“I don’t understand why anyone would ever do a scripted show,” she says. Apart from a handful of cameos in Amy Schumer films like Trainwreck and I Feel Pretty, for the most part, she’s steered clear of the scripted world. “It takes so long to learn lines, [and] to then learn how to act those lines, memorize the lines. If you’re writing the show, [you have to] write the lines, build the sets, wait for the cameras to change position. FBoy Island, you just set it up and you go.”

It may be easy to host the show, but initially, Glaser thought she’d actually be in a different hot seat: as one of the three leading ladies. When creator Elan Gale (a former producer on The Bachelor franchise) reached out to the comic, Glaser assumed she’d be fighting off FBoys herself, in the trenches with the other ladies.

She was wrong, obviously. Still, Glaser has thought about the character she’d be if she did end up having to sift through 24 men in the name of cash.

“I probably would’ve convinced myself that I could flip an FBoy,” Glaser says with a chuckle. “My strategy would be: I would get a lot of action in. I would try to kiss as many boys as possible and have a lot of fun. My goal would be to find someone, and if this is the last time I get to do that, I would have a good time with all these hot guys.”

But Glaser also admits that she might not be savvy enough to tackle an FBoy. She was “gunning for Garrett” until the very end of Season 1, shocked by the duplicitous FBoy’s betrayal of Sarah. “I could not believe the amount of manipulation that he was able to concoct, live on the spot, to this girl.” Sorry, Nikki. Some of us saw it coming from a mile away.

Since she doesn’t have to worry about fending off the FBoys, Glaser doesn’t have to do a lot of planning for her part in the show. It helps that she’s funny (duh), unafraid of finance bros and slimy manipulators, and ready to make up anything on the spot. Hell, the show’s Albert Einstein-level genius send-offs (“FBoy, f-bye!” and “Nice guy, nice try!”) were crafted just an hour before they shot the very first episode.

This must be a lie, though, because Glaser certainly acts like she knows what she’s doing. And she speaks with such conviction as she tells me about one of the hokiest, cheesiest, very best parts of the show—her roasts of the FBoys—and taking it oh-so seriously.

“Turns out, if you don’t pit women against each other purposefully, it won’t happen, a lot of times.”

“It’s very consensual for me. I don’t like to roast people unless they’ve signed up,” she says. “Even with that, a lot of them are not having it.” Bombing in front of hot guy gaggles—that’s just part of the job.

Luckily, a few returning fellas to the cast (we won’t spoil who!) made Glaser’s life a tad bit easier. One Season 1 fan-favorite, who was eliminated early on, returns, as do one runner-up and one winner. In the first season, all three of them were FBoys. Was Glaser ready for the trouble? No. “I was psyched when those guys were cast again,” she says, unafraid of the drama. “I have so much more stuff on [redacted returning FBoy] than I have on any of these guys.”

After watching the first episode in Season 2, you might have a guess as to who that redacted returning FBoy might be—and it might get you even more excited to keep watching.

But while the FBoys are the apparent stars of the series, and Nikki Glaser serves as the hostess with the mostess, the show’s real heroes are always the leading ladies. Somehow, even though they’re all going after the same pool of guys, each woman falls in love with a different man. “That wasn’t manufactured,” Glaser affirms. “Turns out, if you don’t pit women against each other purposefully, it won’t happen, a lot of times.”

This is a game-changer. Even though FBoy Island is loaded with dopey delights, you won’t feel terrible after watching several episodes in a row—because the show actually respects the women it places at the center. It’s like eating a really, really good Caesar salad with lots of dressing and parmesan cheese: a comfort food, sure, but healthy. Fairly healthy.

While watching reality shows, viewers aren’t always trained to respect the women that lead the show. Viewers are quick to chastise contestants on dating shows, especially women, for their ill-fitting choices in a mate—even though they haven’t (and would never) set foot on a reality dating series.

“I implore everyone to be nice to [the three leading ladies] online. They are really sweet ,” she says, a plea to the folks who will inevitably plaster every hilarious moment all over social media. “They have all this pressure on them. I just had so much respect for them, being that young and secure enough with themselves to put themselves into the position to be judged that harshly.”

“I saw a lot of myself in these situations,” Glaser says. “Not even my younger self, my current self, where I would see these girls fall for guys that I would totally fall for.”

So, maybe that Nikki Glaser-led season of FBoy Island isn’t so far off, after all? With the many twists and turns lurking behind every corner of the reality series, don’t rule it out quite yet. 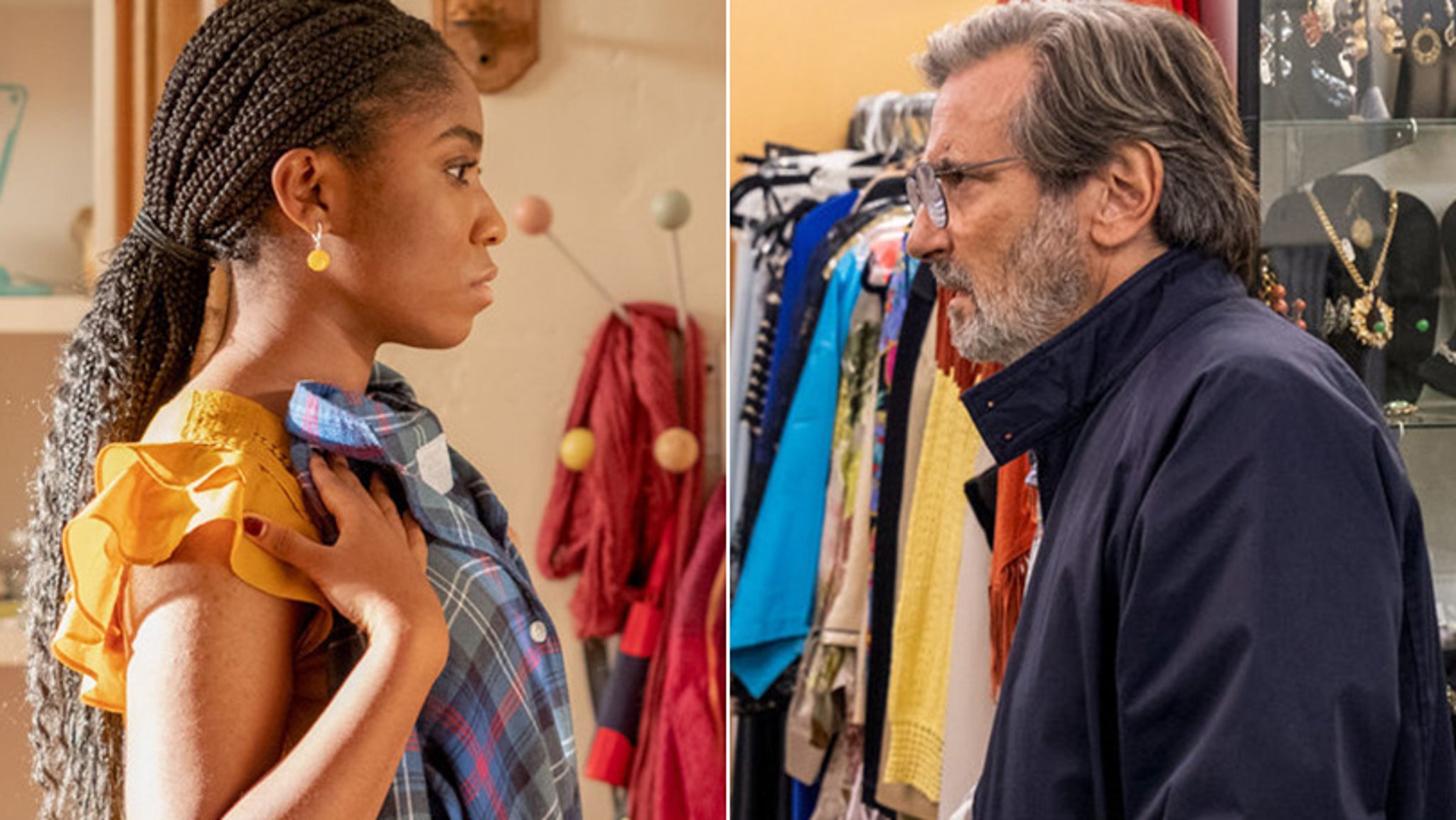