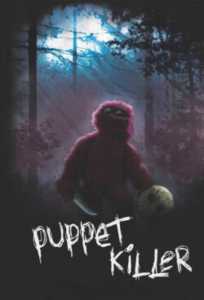 After years on the festival circuit, “Puppet Killer” is finally getting a wide release thanks to Regal Cinemas. “Puppet Killer,” which I saw back in 2019 at Panic Fest, has slowly picked up dozens of awards on the festival circuit, most likely delighting audiences like the one I was in attendance with before the pandemic descended on America. It’s zany, silly, dumb and gory. I say dumb with affection because this movie knows what tropes it’s making fun of and leans heavily into them throughout. So, if you’re a fan of the slasher genre, this is a potential gory classic waiting for you to watch.

Jamie (Paunovic) has had a stereotypical horror life. As a baby, he’s gifted a puppet, named Simon (Majdoub), by his horror movie obsessed mother. As he grows older, he and his mom develop a Christmas tradition of watching horrors next to their lit-up Christmas tree; while the puppet becomes a mainstay of their lives. Unfortunately, Jamie’s mom succumbs to cancer and the horror around the holiday’s tradition dies with his step mom who see no need for blood and guts with her Christmas cheer. So predictably, she meets an untimely fate. Cut forward to the present where Jamie, who is now in high school, is about to revisit that home where his stepmom died with five friends who are unknowingly about to meet Simon.

“Puppet Killer” is not an introductory film for horror newbies because so much of the plot, humor and kills rely on horror film knowledge. For instance, if you don’t understand why it’s consistently funny that Jamie and his friends are in high school, whilst the actors are all easily 30+, if not 40+, then you’ll need to load up on slasher films before even getting one of the film’s best running gags. For those curious minds, you’ll either have a stack of horror film homework to watch before attempting a viewing of “Puppet Killer” or your horror film knowledge will help you pass the test with flying colors as you laugh along with the absurdity of the film.

I say this because a huge charm with “Puppet Killer” is self-awareness. Not only does this film know and understand its horror roots, but on a second level it understands it’s indie and leans heavily into the esthetics of a shoestring budget film. Any minor complaints I may have I’ve decided not to bother mentioning because “Puppet Killer” has this low budget charm that’s hard to ignore. I’d love to believe this is a film destined to become a midnight cult classic, but it’s hard to gauge which films have that gusto, or if the idea of a film becoming a cult classic is simply a part of an era that has passed us as we drift closer to more films being streamed. Regardless, horror fans will remember “Puppet Killer” for years if they stumble across this diamond in the rough.