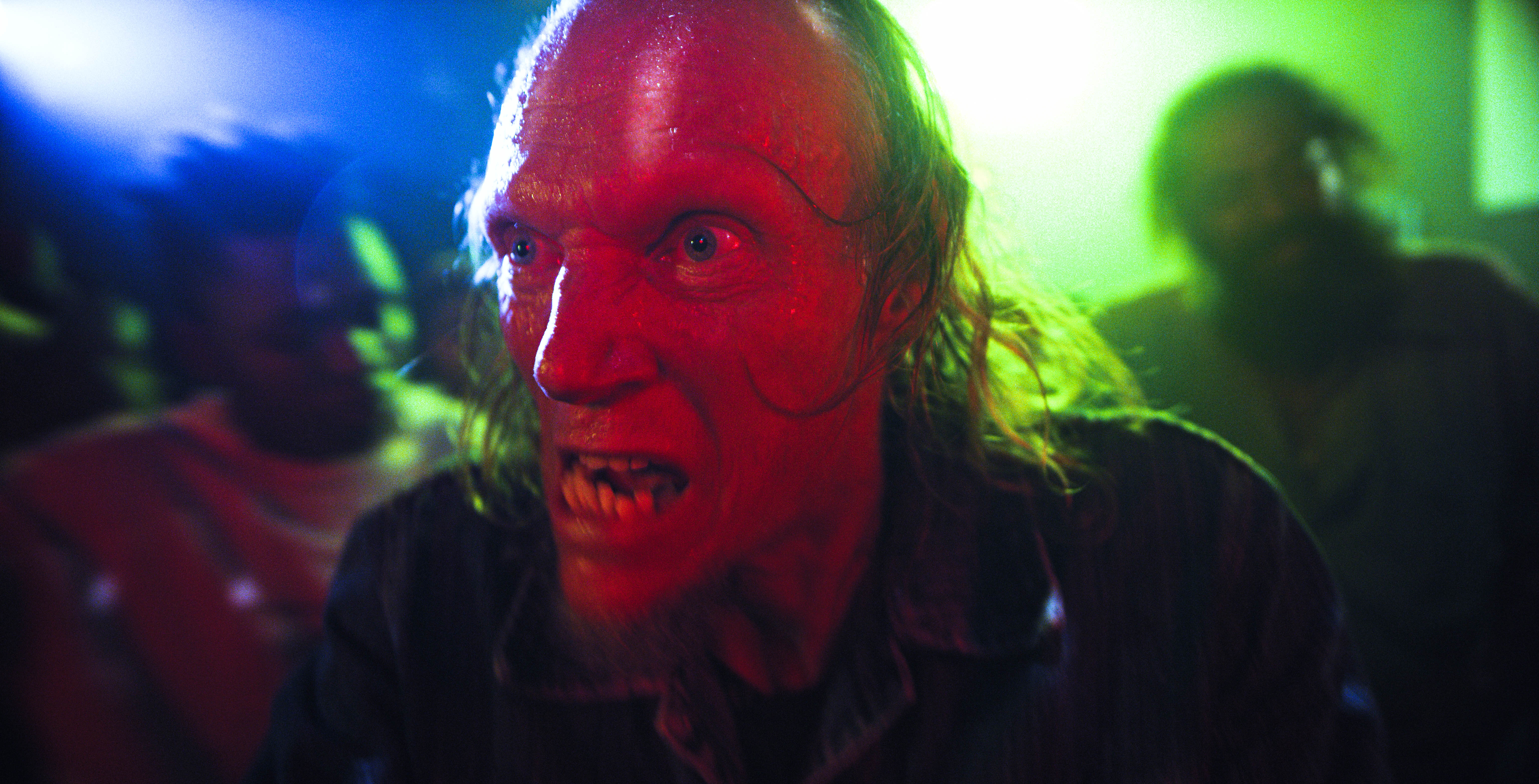 Fried Barry – Premieres May 7 (Please note, this is updated from the previously announced date, May 6.) **A Shudder Original Film

Fried Barry follows the story of a drug-addled degenerate who, after yet another bender, gets abducted by aliens. Barry takes a backseat as his alien visitor assumes control of his body and takes it for a joyride through Cape Town. What follows is an onslaught of drugs, sex and violence as Barry’s alien tourist enters the weird and wonderful world of humankind.

The feature directorial debut from award-winning music video director Ryan Kruger and starring newcomer Gary Green, the genre pushing, acid-washed, sci-fi horror has been praised by critics and embraced by fans around the world.

The film is produced by James C. Williamson and Kruger and executive produced by Nicolai Fuglsig (12 Strong). Williamson shares a story credit with Kruger who serves as both writer and director. The expansive cast is led by Green alongside Bianka Hartenstein, Sean Cameron Michael (Shooter, Blood Drive), Chanelle de Jager (The Widow, Outlander), Joey Cramer (Flight of the Navigator) and Jonathan Pienaar (Blood Diamond, Roots).

The Reckoning – Premieres May 13 **A Shudder Exclusive Film

(Available on Shudder US, Shudder CA and Shudder UKI)

After losing her husband during the Great Plague, Grace Haverstock (Charlotte Kirk, Ocean’s 8) is unjustly accused of being a witch and placed in the custody of England’s most ruthless witch-hunter, Judge Moorcroft (Sean Pertwee, Dog Soldiers). Forced to endure physical and emotional torture while steadfastly maintaining her innocence, Grace must face her own inner demons as the Devil himself starts to work his way into her mind.

In PG: Psycho Goreman, young siblings Mimi and Luke unwittingly resurrect an ancient alien overlord who was entombed on Earth millions of years ago after a failed attempt to destroy the universe. They nickname the evil creature Psycho Goreman (or PG for short) and use the magical amulet they discovered to force him to obey their childish whims. It isn’t long before PG’s reappearance draws the attention of intergalactic friends and foes from across the cosmos and a rogues’ gallery of alien combatants converges in small-town suburbia to battle for the fate of the galaxy.

Skull: The Mask – Premieres May 27 **A Shudder Original Film

In this splatter-filled supernatural slasher, a Pre-Columbian artifact contains the spirit of Anhangá, the executioner of the god Tahawantinsupay. Whoever wears the masked is possessed by Anhangá and compelled to commit sacrifices to resurrect his god. It’s up to a museum assistant and a policewoman to stop the slaughter before the ritual is completed. A throwback treat for fans of ‘80s slashers and gory practical effects. 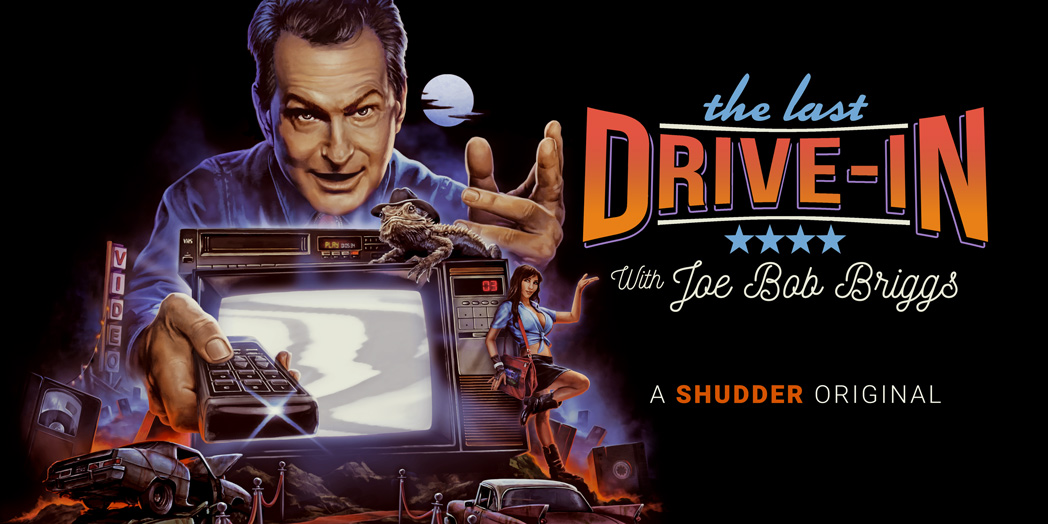 The hit original series with Joe Bob Briggs premiered on April 16 and continues with new episodes every Friday. Briggs, the world’s foremost drive-in movie critic, presenting eclectic horror movie double features, interrupting the films to expound upon their merits, histories and significance to genre cinema. The show’s hashtag, #TheLastDriveIn, has trended in the top 10 on Twitter in the US during the premiere of every episode and special, often reaching No. 1. Guest stars to date include Anna Biller, Kelli Maroney, Chris Jericho, Lloyd Kaufman, Barbara Crampton, John McNaughton, Reggie Bannister, Ashley Laurence, Doug Bradley, Michael Berryman, Felissa Rose and Tom Savini. 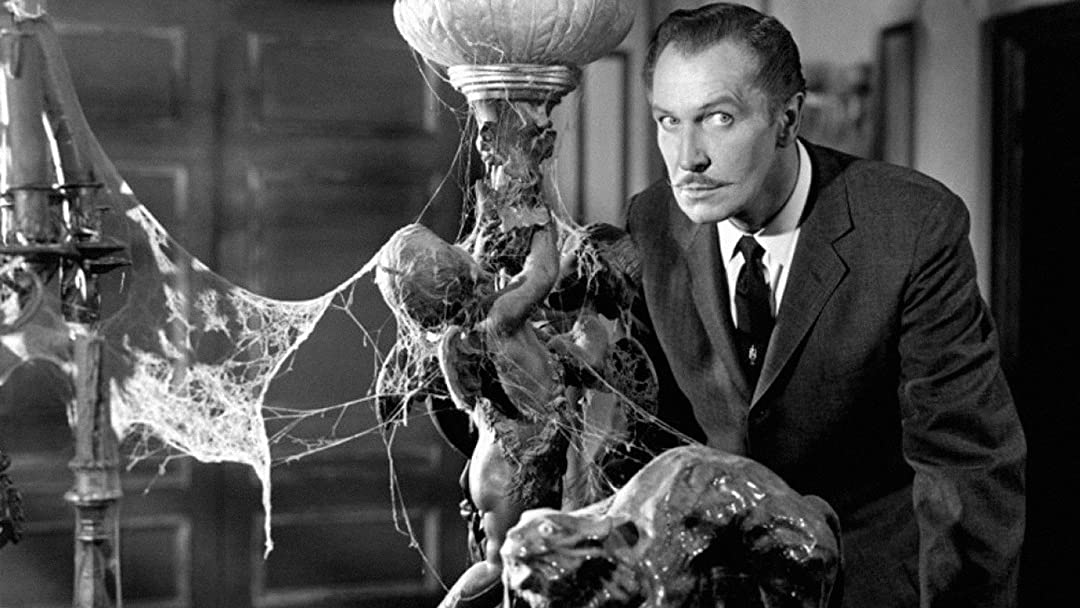 May 1
The Wicker Man (1973; US)
During a celebration of May Day, a puritan Police Sergeant arrives in a Scottish island village in search of a girl who the locals claim never existed.

House on Haunted Hill (1959; US)
A millionaire offers $10,000 to five people who agree to be locked in a large, spooky, rented house overnight with him and his wife. The film is produced by horror legend, William Castle.

House on Haunted Hill (1999; US)
An amusement park mogul offers a group of diverse people $1,000,000 to spend the night in a haunted house with a horrifying past.

13 Ghosts (1960; US, CA)
A family inherits what proves to be a haunted house, but a special pair of goggles allows them to see their ghostly tormentors. The film is produced by horror legend, William Castle.

Curse of the Demon (1958; US, CA)
Directed by Hollywood great, Jacques Tourneur, American professor John Holden arrives in London for a parapsychology conference, only to find himself investigating the mysterious actions of Devil-worshiper Julian Karswell. 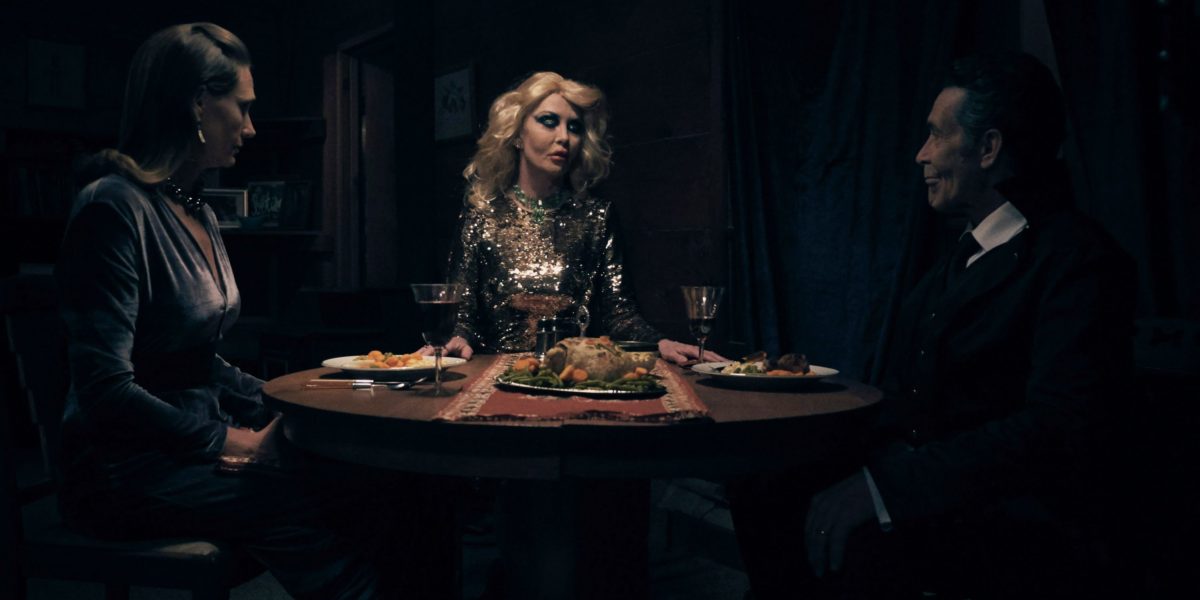 May 4
Frankenhooker (US)
Directed by Frank Henenlotter, a medical student sets out to recreate his decapitated fiancée by building her a new body made of Manhattan street prostitutes.

May 10
Sator (US, CA)
Secluded in a desolate forest, a broken family is observed by Sator, a supernatural entity who is attempting to claim them.

Climate of the Hunter (US, ANZ)
Two sisters vie for the affections of a man who may or may not be a vampire. When the three come together for dinner it has all the makings of a lovely meal filled with desire, memories and blood. From indie auteur Mickey Reece comes a wholly original new vampire vision.

The Funeral Home (US, CA, UKI, ANZ)
Bernardo is an undertaker who runs mortuary business in the same house where he resides. In the front he has his clients. And in the back, his dysfunctional family lives among coffins, wreaths and mischievous supernatural entities that visit on a daily basis. They attribute the paranormal manifestations to the dead bodies from their mortuary work but finding the real source of all this madness will be their quest, and what they might find is a terrifying truth. 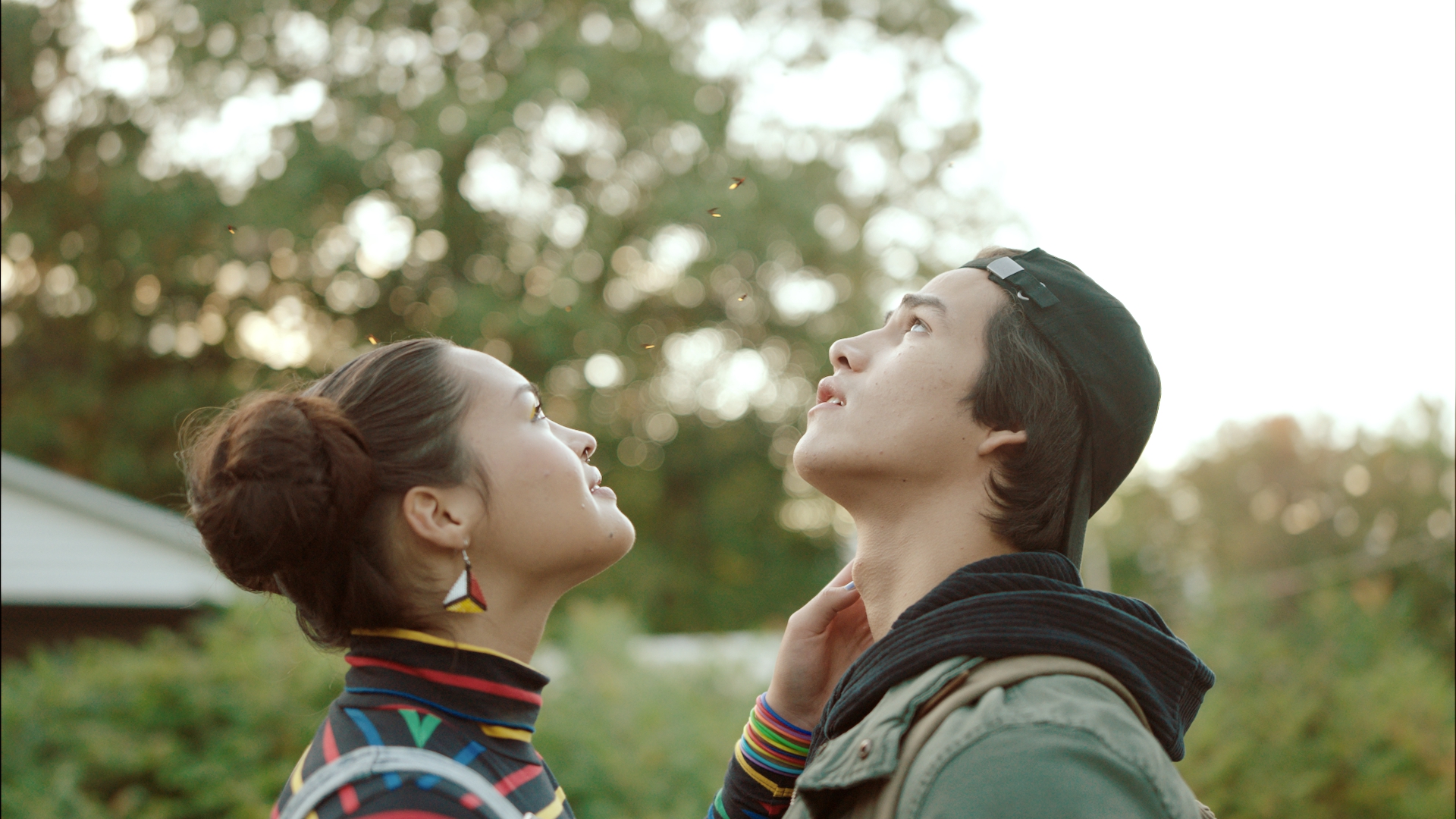 Trickster – Full Season Binge Release (US)
Based on the bestselling trilogy of novels by Eden Robinson, Trickster tells the story of the Indigenous Gothic, spirits, ancient magic and deadly rites of passage in a coming-of-age story unlike any you’ve ever seen.

American Mary (US)
The allure of easy money sends Mary Mason, a medical student, into the world of underground surgeries which ends up leaving more marks on her than her so called “freakish” clients.

Time Lapse (US)
Three friends discover a mysterious machine that takes pictures twenty-four hours into the future, and conspire to use it for personal gain, until disturbing and dangerous images begin to develop.

Found (US, CA)
A horror-obsessed boy discovers his older brother is a serial killer. 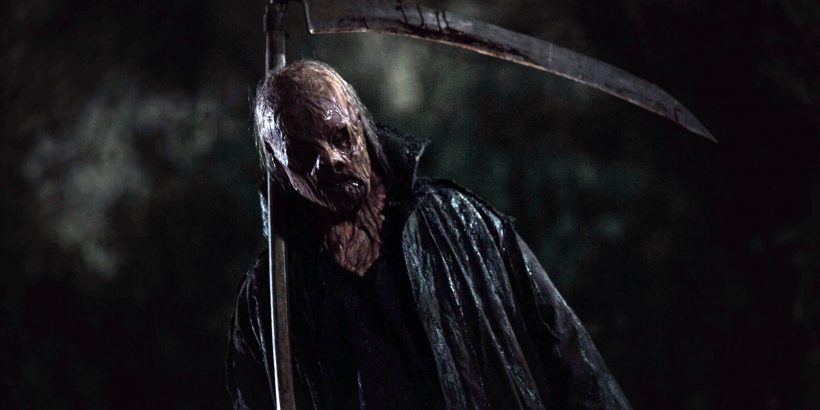 Def by Temptation (US, CA, UKI, ANZ)
An evil succubus is preying on libidinous black men in New York City, and all that stands in her way is a minister-in-training, an aspiring actor, and a cop who specializes in cases involving the supernatural.

Black Roses (US, UKI, ANZ)
Demons hypnotize the general public by posing as a rock and roll band.

Werewolf (US, CA)
WW2: a group of children liberated from a concentration camp find themselves, aimless and hungry, stranded in an abandoned mansion in the forest, surrounded by vicious attack dogs.

The Machine (US, CA)
In efforts to construct perfect android killing machines in a war against China, UK scientists exceed their goal and create a sentient robot.

The Windmill (US, CA)
In a desperate attempt to stay one step ahead of the authorities, Jennifer joins a coach-load of tourists embarking on a tour of Holland’s world-famous windmills. She and the other tourists are forced to seek shelter in a disused shed beside a sinister windmill where, legend has it, a Devil-worshiping miller once ground the bones of locals instead of grain. As members of the group start to disappear, Jennifer learns that they all have something in common – a shared secret that seems to mark them all for doom