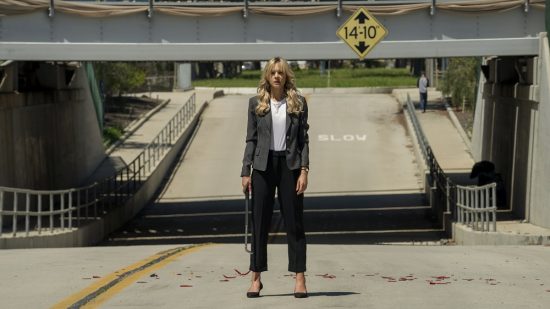 Within the eight nominees for Best Picture in the 2021 Oscar season, Darius Marder’s Sound of Metal stands out (you might say, obviously) as the movie which harnesses the power of sound in telling its story. However, there’s another nominee which acts as a counterpoint – because it focuses on the power that silence can hold.

Emerald Fennell’s Promising Young Woman is ostensibly about how our society values men over women. It seeks to remedy this imbalance in its character study of heroine Cassie (a magnetic Carey Mulligan performance). Silence is really difficult to capture on screen, especially nowadays, as it requires some kind of huge, voiceless visual action (see that notable scene in The Last Jedi) to ensure that viewers don’t reach for their second screen. So Fennell doesn’t use complete silence (shout out to the soundtrack featuring only female artists) to tell the story, she demonstrates the possibilities of withholding expected reactions and information.

Silence is power is established early on. The film’s antagonists and society at large use silence to mask dark secrets, that’s nothing new, what’s breathtaking is how Cassie weaponises silence to protect herself and others from harm, and to stand up for herself – Silence as bravery.

The remainder of this article refers to specific scenes in Promising Young Woman, so if you have not seen the film yet you might want to stop here.

Promising Young Woman is set almost entirely from Cassie’s point of view, even if we don’t always know her inner motivations. Fennell gives Cassie a choice in every scenario she faces, and she often chooses not to rise to the bait. Complete and utter silence in conversation is difficult to fathom; we are social creatures, designed to communicate to ensure survival, and there’s an added layer for women – we are told it’s our place to fill the void, to be polite and ease others’ awkwardness. Not Cassie, why should she offer up information to those who don’t deserve it, just because that’s what people do? Cassie creates an outward archetype of what a good girl conformist looks like, yet she only ever behaves in a way that furthers her own ends. Here, not doing something works for her so much better than words and action could.

Early on in the movie, Cassie comes across a group of maintenance workers, who take her to be making a walk of shame. Not an unreasonable thought, she’s in last night’s outfit, walking barefoot ravenously munching on a breakfast hotdog. The workers start catcalling. Other, lesser films would have their protagonist say something witty in response, as if smart words have ever worked to shut these men up. Not Fennell. Instead, Cassie stops and says nothing, staring at the men, unmoving. The workers become confused, ramping up the insults; Cassie continues to stare. It becomes eerily quiet and the entire dynamic of the scene changes, the group’s confusion turns to fear, they go mute, all because a slight, young woman does not react to their chiding. Cassie triumphantly walks on.

This act of doing nothing when we expect characters to do something, anything – is Cassie’s theme song. Throughout the movie characters ask Cassie questions about herself – often benign questions, from her parents, her co-worker, an old friend, the guy she dates. Cassie could deflect or lie, yet regularly she chooses simply not to answer. This is initially irritating, we are culturally programmed to think it rude. But is it us, the viewer, with our cultural bias, who is actually at fault?

Later, Cassie sits in the Dean’s office of her old college, calmly telling Dean Walker (Connie Britton) that her own daughter is in the company of some very sketchy dudes – an act of revenge for the Dean not believing or caring enough about Cassie’s friend Nina’s rape reports (allegedly ignored because Nina liked to drink and have sex). The Dean asks where her daughter is. Cassie is silent. She asks again, and again until eventually, she must beg. Cassie holds the power of silence in the palm of her hand, because fight-or-flight humans can’t help but imagine the worst-case scenario when they’re in the dark. Coupled with Mulligan’s calm, almost smirking delivery of the information Cassie chooses to share, again we see anger born from fear. The Dean tries to fight deafening silence with raising her voice. Cassie remains stoic, and tells her to calm down, weaponising society’s minimising of women’s feelings to devastating effect. We all sigh with relief when Cassie admits that the Dean’s daughter is perfectly safe, until we are forced to acknowledge that Cassie might be right, could empathy for Nina’s situation only be won by employing such devious means?

Moments after this, another scene unfolds, a scene which doesn’t add much to the narrative, but reveals everything about the limits of Cassie’s inner anger. She stops her car in the middle of the highway, annoying the driver behind. He shouts at her, calls her names, all the tenets of road rage that we have come to consider as acceptable, when really it’s just another display of failure in empathy for our fellow woman. Of course, Cassie does not react, until she gets out of her car in a fugue state and repeatedly smashes the driver’s windscreen, terrorising him and us in the process. Silence equals violence.

Occasionally, Cassie ceases to say or do anything. When confronting Jordan Green (Alfred Molina), the lawyer who successfully defended Nina’s rapist in court, her flat introduction is enough for Jordan to begin blubbing, revealing a man driven to personal agony by his own actions. Cassie displays humility, holds him, perhaps acknowledging his genuine remorse. And then she leaves to speak to a local undesirable, who asks whether he should still ‘go into the house‘. We can only imagine what Cassie was prepared to do to Jordan, but we can assume it involves a more visceral type of pain. We must wait for what feels like minutes, as Cassie mulls over – silently – whether she has finished wreaking her wrath.

Lulled into a sense of understanding that Cassie is not into oral communication, at her moment of reckoning – handcuffing rapist Al to his bed dressed as a naughty nurse while brandishing a needle, she talks and talks and talks – the delivery of a much-rehearsed speech that has been eating away at her insides. We’re reminded that some of the power of silence comes from when and how it is broken. This scene goes on to teach us yet another terrible lesson, that when Cassie finally lets out all of her feelings she is thoroughly punished for her words.

And lastly, once Cassie has been (seemingly) permanently silenced – her absence is felt deeply and profoundly. Fennell takes a leaf from Alfred Hitchcock’s Psycho, leaving the viewer bereft of its lead, even if we’re still unsure whether we liked or agreed with her actions. But once again, Cassie’s silence betrays her power, she still can be heard, with a little forward-planning.

Promising Young Woman like no other recent movie, lets us bathe in the liminal space between thought and action, and we’re all better off for it. Would Cassie agree? Perhaps, but I very much doubt she’d say it out loud.