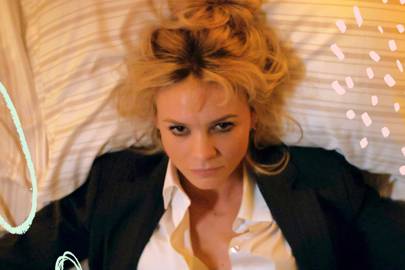 Written and directed by The Crown’s Emerald Fennell, Promising Young Woman has already been hailed by critics as a masterpiece — with the movie bagging the award for Best Original Screenplay and Outstanding British Film at the 2021 Baftas, and also being tipped to win Best Picture at the upcoming Academy Awards this Sunday.

Despite its synth-pop soundtrack and aesthetically-pleasing backdrops (there’s a lot of symmetry, neon signage and pastel colours used throughout), Promising Young Woman is the furthest thing from fluffy, and the way it tackles topics of rape culture and victim blaming is nothing short of sublime.

Starring Carey Mulligan as Cassie Thomas, the film is about accountability and retribution, with the protagonist seeking to avenge her late friend, Nina Fisher, who was raped at medical school and, it is suggested, took her own life as a result.

Ignoring the protestations of her loved ones and Nina’s mother, Cassie becomes this sort of vigilante/antihero, set on putting the world to rights. In her mind, the only way to do so is to take down those who wronged her friend — from their pal Madison who dismissed Nina’s accusations because of her “party girl” image and the college dean who met her with disbelief and inaction, to the perpetrator himself, his lawyer and all his friends who stood by and recorded the incident, without intervening to help her.

Hitting up local night spots, Cassie also takes it upon herself to teach a lesson to predators at large. Pretending she is inebriated, she tests the seemingly “nice guys” who hail her a cab to ensure she gets home okay — only to take advantage of the fact she’s alone and incapacitated once behind closed doors. It is then that Cassie switches to sobriety and challenges these men, before tallying up her “conquests”, so to speak, in her diary.

Naturally, given its subject matter, the film at times makes for difficult viewing — even more so for sexual assault survivors. But it is an urgent and necessary watch. Yes, it falls into the fantasy/psychological thriller genre, but at its core is something very real and raw. As someone who has experienced some of the things depicted in the movie, it honestly felt like a breath of fresh air. Both Hollywood and society too often shy away from these topics, glossing over rape as though it is no longer an issue and has no place in conversation.

But women know that not to be the case.

Just last month Sarah Everard’s disappearance sparked widespread outcry across the UK, not least because the man arrested on suspicion of her murder was a serving Met officer. The 33-year-old’s decision to walk home alone after 9pm was also called into question, wrongfully placing the blame on her, instead of the person who took her from her family and loved ones.

Who is Emerald Fennell and why does she look so familiar?

Daisy Coleman, the subject of Netflix documentary Audrie and Daisy, tragically ended her own life aged 23 last year. When she was just 14, Daisy was allegedly raped at a party in Maryville, Missouri by then 19-year-old Matthew Barnett, the grandson of a former Republican state representative. Barnett pleaded guilty to a lesser charge of endangerment of a minor.

The 2015 Chanel Miller case also comes to mind when watching the film. The then 22-year-old was sexually assaulted at a party while unconscious, before her statement at the sentencing hearing went viral after being published online by BuzzFeed. At the time, headlines and conversations were dominated by the assailant’s name, Brock Turner — not because they were admonishing him for being a rapist, but because they saw it as a “waste” of his life, talent and potential to lock him up (he had a swimming scholarship for Stanford University). Despite being sentenced to just six months in prison, he served only three.

It’s what makes Promising Young Woman so pertinent. It may be fantasy, but rape is not the stuff of fiction. It is, rather, a stark reality for many women. News cycles churn on and the dialogue around women’s safety and sexual violence inevitably quietens down each time — it doesn’t even account for the vast number of women who don’t make headlines or who are made to feel as though they can’t come forward.

Fennell’s brilliant writing helps to vindicate survivors who, like myself, have been met with disbelief and judgement, time and again. Fictional or not, Cassie’s character isn’t just acting on behalf of her friend, she’s acting on behalf of all the women who have suffered at the hands of men, tipping the scales of justice in our favour for once.

Promising Young Woman is finally landing in the UK this April! Here’s everything you need to know about the hit feminist film

The film dispels this view that women who get “too drunk” or wear certain types of clothing are somehow “fair game” or “asking for it”. It challenges those who are complicit, making them see that they are just as much of the problem as the perpetrator, for allowing these things to happen and for not offering support and belief to those who need it the most. It highlights that too often male perpetrators are held in higher esteem and offered more protection than the women who have suffered not only the incident, but the lasting impacts of what happened to them.

It is evident that Nina’s rapist thinks he has the upper hand and that, because he is a wealthy, white male doctor, he is somehow immune to the fallout of his actions. His concern is not about what he has done, but how it affects his life. It is simply an inconvenience for him to deal with, a blip in the road before he continues on course. And this really is the crux of what the film is getting at and the issue of rape culture itself: men think they can get away with it because they have been emboldened by centuries of reinforcement. Everything is designed to work in their favour and get them off the hook.

The only hope we have of defeating this toxicity is changing the system itself. We need to make the process of reporting crimes easier; investigations needs to be thorough and exhaustive; judiciaries need to take into account that not all sexual assault cases have physical evidence; and we, above all, need to stop normalising this behaviour and for the punishment to fit the crime.

Because for sexual assault and rape survivors, it isn’t just about the event, it’s about everything that comes with it — the strain on relationships, mental health, self-worth and ability to go about every day life without fear or question.

If men think it’s “upsetting” to be accused of rape, imagine how it feels to actually be raped.

Promising Young Woman is available to stream on NOW TV.