Skip to Content
Home Reality TV Is TikTok Changing The Way We Break Up With People? 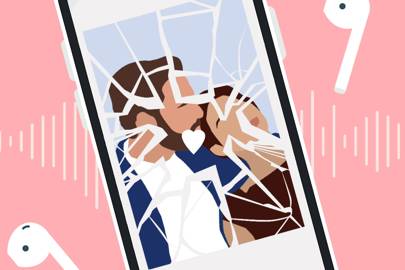 Savannah Brookbank knew her three and a half year relationship was coming to an end. The 25-year-old, who works in social media, said it was her ‘intuition’ that told her things between her and her “first love” weren’t quite right. But even when the pair finally made their split official, Savannah still felt completely floored – and entirely isolated while trying to deal with such a gut-wrenching break-up.

How has TikTok impacted ‘Millennial’ beauty?

“Suddenly, the reality of being alone really set in,” she explains. “I picked up my phone and took a video, as a message to myself to say, ‘You won’t feel like this forever.’ I looked an absolute mess and wanted some kind of reinforcement that while it was okay to feel that way, I couldn’t let myself stay that way.

“So I posted it on my TikTok, which had zero followers, and the rest was history.”

Savannab is not alone. As TikTok’s popularity exploded over the last year (the app now has 689 million active users worldwide, with 315 million downloads coming in the first quarter of 2020), many users are using the platform to film a varied assortment of their day-to-day lives. From dance challenges, to life advice, make-up reviews and even kink sharing, nothing is off-limits on TikTok – not even the usually private heartbreak of a break-up.

As of April 2021, TikTok has well over 10 billion videos under the #breakup tag.- made up of emotional speeches, savage putdowns and revenge-style glow-ups. However, some TikToker’s have gone beyond creating a slick sixty second video to provide a snapshot into their heartbreak, instead choosing to show the honest reality of a split – often messy, difficult and tearstained.

Break-up TikTok is an unusual departure from the norms usually associated with social media. With Instagram often dubbed a “highlights reel”, where highly curated and obscenely filtered posts are often used to convey a person’s life, it seems this recognisably artificial snapshot is starting to fall out of favour. People, it seems, are now hungering for a relatable authenticity.

Carolina Sousa, 26, wasn’t in it for online clout when she started documenting her long-distance relationship with her now ex on TikTok. However, after she posted an emotional video of herself crying as she listened to a voicemail from her former partner (which racked up a staggering 16 million views) Carolina found herself gaining 100,000 followers – many of which who identified with her situation.

“I just wanted to express how I felt in that moment,” she says. “I didn’t fake my emotions or anything – that was really and purely how I felt.

“I had thousands of people in my inbox, asking for advice on how to deal with a break-up. I started to schedule an hour in a day to reply people about their relationship situations.”

The relatively newfound need for people to share even the most private aspect of their lives is part of our increasing “culture of disclosure”, psychotherapist Sally Baker explains.

“TikTok offers ‘hyper disclosure’ on a global scale,” she says. “In a way, pain and grief is the new highlights reel. There’s almost a competitiveness in people sharing their grief online, it’s starting to turn into the ‘Pain Olympics’ and the TikTok format supports that through likes, views and shares.

“TikTok also allows for those to take control over the narrative of their break-up. With the modern panoply of dating, with people getting ghosted, or dumped by text, some people aren’t given the opportunity to reply. TikTok then gives you that voice, and you can set the agenda and shape the story in front of a mass audience.”

The current climate should also be considered when we look at why people are choosing to share their break-up grief publicly. The coronavirus pandemic, which massively contributed to TikTok’s booming success last year, has seen us separated from loved ones – with the app becoming increasingly important for those isolated and looking to connect with people.

Savannah said one of the reasons she took to TikTok was because she was separated from her close friends, who she would have usually turned to during the break-up.

“I had no friends of family close by to talk about the next steps [of a split],” she explains. “I live in rural Wales, and my best friend lives in Manchester so I was completely alone.

“In normal circumstances you’d usually have a friend come over and you’d cry about it and everyone would mock your ex to make you feel better. I didn’t have any of that.

“TikTok almost became my safe place, because I didn’t have anyone to comfort me.”

While Savannah felt that sharing her story was cathartic, Sally argues baring your soul entirely on social media may be more detrimental for our mental health in the long term.

“During the first wave of the pandemic, we turned to Zoom to socialise – and while it helped, it was no real substitute for physical interaction,” she says. “If we’re exposing our vulnerabilities on TikTok, we’re looking for external validation for comfort. And while users will find some of the validation they’re looking for online, they’re also exposing themselves to an audience who may be highly judgemental and negative – and that can be hugely triggering for some.”

It’s something Savannah was forced to experience first-hand. As well as a number of complimentary and supportive comments from her now 82,700 followers, she also faced a barrage of criticism and trolling.

“I had a sudden wave of support coming from complete strangers going through something really similar, but on the other hand, I would get my ex’s friends I would get things like my ex’s friends DM’ing me, calling me ‘pathetic’ and saying I needed to ‘get a life,’” she says.

“I knew for them to have come across my videos that I was being spoken about which gave me really bad anxiety, especially before hitting upload on the next TikTok.”

Is love *really* blind? Why physical attraction isn’t the be all and end all of relationships anymore

Savannah’s ex then found her TikTok videos – and was left less than impressed.

“He basically told me to ‘stop posting TikTok’s about the situation’. And when I tried to respond I had been blocked,” she adds. “Suddenly my TikTok’s started to randomly get reported. At first it put me off wanting to continue documenting my journey and it made me feel extremely confused and distressed, because I really wasn’t hurting anyone, I was simply using this platform as my safe space.

“And then I decided that actually this was helping me and thousands of other people to heal, so I wasn’t going to allow this to be taken from me.”

Carolina was also trolled for sharing her story on TikTok. “I received a lot of mean comments,” she says. “People said I was fake or ‘such a bad actress.’

It’s something that Sally stresses to those who are considering packaging their heartbreak to TikTok.

“TikTok is not necessarily a safe space if you’re vulnerable,” she says. “Some people treat it in the same way you’d treat therapy – people are their stories, and an audience bears witness. But it’s not a benign audience – it’s often a cruel and unkind community.

“Comments are not moderated and there can be a whole gamut of responses. Even for the most resilient person, who can take even the harshest of criticism, having a constant barrage of negative comments can be incredibly damaging.

“Considering so many of TikTok’s users are young, we could be seeing vulnerable young people being made even more vulnerable.”

TikTik Tok Broken Robot or Romantic Recluse? Which post-lockdown tribe do YOU fall into?

It’s been eight months since Savannah made her first TikTok video, and she feels “100 times better” when she looks back on her split.

While she doesn’t regret using the app to document her break-up, she does wish she had been a little more prepared for the popularity of her videos.

“I can’t even watch my first few TikTok’s back because of how sad and broken that girl is,” she says. “I genuinely believed I wouldn’t smile again.

“I went into this blind as I didn’t expect my account to grow as quicky as it did. But I’ve met so many amazing people through TikTok that are going through or have been through painful break-ups. We all have similar feelings and experiences and there’s definitely a benefit in knowing you’re all supporting one another to feel less alone in it.

“But everyone’s experiences are different. There is definitely no one-size fits all when it comes to a break-up.”