Lisa Rinna is spilling some tea.

After the latest episode of The Real Housewives of Beverly Hills aired on Wednesday night (August 4), Lisa claimed that co-star Erika Jayne got into a “screaming fight” with a producer, which was allegedly cut out of the episode.

“Dang it… I wish they had shown the screaming fight between the producer and Erika last night on the show in La Quinta,” Lisa wrote on her Instagram Story.

“Now that would have been epic TV. Too bad,” Lisa added. “Bravo Bravo F–king Bravo 😂😂😂”

Erika and Bravo have not addressed Lisa‘s claims yet.

During the latest RHOBH episode, Erika had a conversation off camera with co-star Crystal Minkoff, where she said that her ex-husband Tom Girardi has called her every day since she left him and filed for divorce. She had previously said she had never heard from Tom.

Erika then became upset when Garcelle Beauvais brought up the topic while all of the ladies were filming.

“It was a private conversation that was picked up by production on the mics and then Garcelle, who was not present for the conversation, proceeded to ask Erika about it,” a source told People. “So of course Erika was upset. The editing was unfair and inaccurate.”

During the episode, Erika got very upset when Garcelle brought up the topic.

“Erika shared [on our hike earlier], if you don’t mind me sharing, that Tom calls her,” Garcelle told the group.

Erika then hit back with, “Well, I do mind you saying that because I feel like you’re betraying my friendship right now. But please, have your moment.”

Erika then explained to everyone that her ex does call her, but she “won’t take his call.”

Clearly upset, Garcelle said that she didn’t want to anger Erika by bringing.

Erika snapped back, saying, “[It was] something that I haven’t said and sometimes, not everything is up for discussion. Just because someone tells me something about one of you, does not mean I’m bringing it up. I’ve been very open and very honest, so I think that was dirty.”

Erika then left the room crying and went into a bathroom.

If you missed it, Erika recently slammed claims she was “hiding assets” amid her ongoing legal drama. 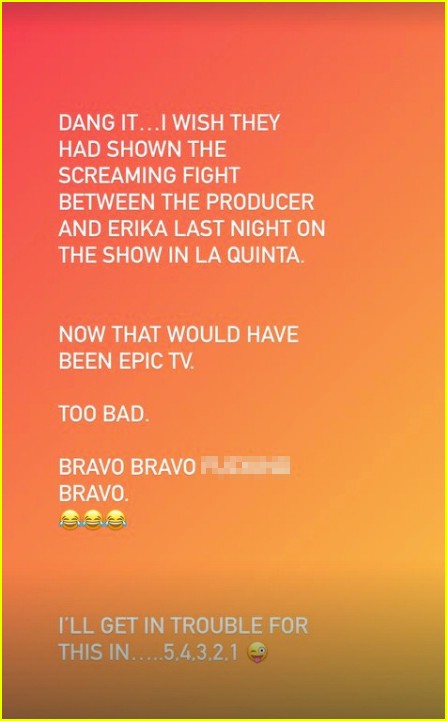