The 27-year-old singer took to Instagram late last night to announce that she and her partner, English footballer Alex Oxlade-Chamberlain, also 27, are expecting their first child together.

“So happy to be on this wild journey with my soulmate,” Edwards wrote in her caption, which accompanied black-and-white portraits of her, Oxlade-Chamberlain and her bump.

In the 11 hours since her announcement, the post has amassed over two million likes.

Mixers — the name that fans of the girl group go by — and stars alike have flooded the post with comments rejoicing at the news.

“Arghhhhhhhh so so so happy for you both! And so bloody happy we get to go on this journey together! Love you so much ❤️❤️❤️❤️❤️❤️❤️” fellow Little Mix bandmate Leigh-Anne Pinnock wrote on the post.

Jade Thirlwall also commented “😭😭😭 beaming for you both ♥️ I’m the luckiest auntie in the world! Love youuuuu x”

At the time of writing, it seems that ex-Little Mix artist Jesy Nelson has not commented on the post.

Edwards and Oxlade-Chamberlain began dating in February 2017, two years after the songstress split from One Direction boybander Zayn Malik.

Oxlade-Chamberlain took to his own Instagram to announce the happy news, sharing the same images of Edwards’ baby bump and the beaming couple.

“Anyone got any advice on how to change nappies? 😅 so grateful and excited to become a dad ❤️ bring on the sleepless nights 🤪”, the Liverpool F.C. midfielder wrote in the caption.

While a due date has not been disclosed, it is likely that Edwards is past the three-month mark, which could mean the new bub could be greeting the world in October or November. 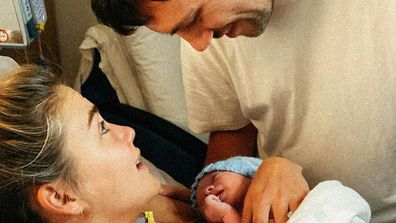