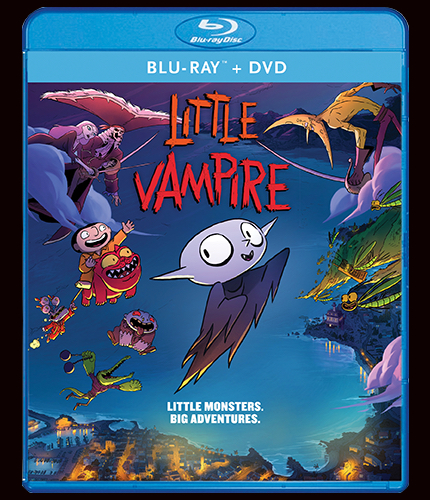 Little Vampire (Petit Vampire)
The film arrives on digital September 21 and is now available to pre-order on a Blu-ray/DVD combo pack, which will be released October 5, via Shout! Kids and Studio Canal.

Nearly 20 years ago, French comic book artist Joann Sfar created the character of a young boy who yearned to go to school but was not permitted to do so. The problem? He only appeared to be a little boy; in truth, he was a vampire.

Since its first publication, Little Vampire Goes to School became popular and led to sequels, while its author, Joann Sfar, manifested his rich creativity in a series of graphic novels, expanding to live-action films (Gainsbourg: A Heroic Life, The Lady in the Car with Glasses and a Gun) and an animated feature adaptation of his own work, The Rabbi’s Cat (2011), co-directed with Antoine Deslevaux, which is marvelous and is now streaming on The Criterion Channel.

Now Sfar has adapted the Little Vampire series into a film, Little Vampire (Petit Vampire), which was released in theaters last year in France, Singapore, Spain, and Australia, and played several genre film festivals, including Sitges and Fantasia, which all translates into this: you may not have seen this film at your local cinema, it may have eluded your consciousness at those busy genre fests, and you might have concluded that it’s only for children, but it’s not.

It may be my old-school eyeballs, but I still love the look and feelings engendered by 2D animation, and Little Vampire features lovely animation, in a style that makes the characters look endearingly cartoon-y, for want of a better description. That style enhances the continual stream of genuine wit that abounds in nearly every frame, and makes it a pleasure to watch.

Running 85 minutes means that the film does not indulge in any character bits that are not important to the story and/or enlightening about the characters, for the most part. (Some little bits are included simply because they’re funny, it seems, so I laughed or grinned a lot. Upon reflection, I realized that those bits, too, revealed something about the characters, including the supporting cast, that informed their relationship with the leads.)

The basic story remains the same — a little vampire wants to go to school — but like The Rabbi’s Cat, Sfar has other things on his mind that he wants to feature. These are not the dreaded ‘teachable moments’ that so many Hollywood animated films include for the purpose of ‘educating’ young people. Instead, it’s a broader view of human culture and insight on how monsters might conduct themselves within human society, whether they are vampires or not.

Thus, I loved Little Vampire. I will say that, since I don’t have children, I have no idea if it’s just right for your little ones, if you have any little vampires for whom you are responsible; some of the content is quite, hm, ‘mature.’

It’s a good thing that the film will be available on North American digital entertainment platforms on September 21, ahead of its release “in a Blu-ray+DVD combo pack,” according to Shout! Factory, “as well as a standalone DVD from SHOUT! KIDS in collaboration with STUDIOCANAL on October 5, 2021. Available for the first time on North American home entertainment shelves, the DVD and Blu-ray contain both the English and French audio tracks with English subtitles.”