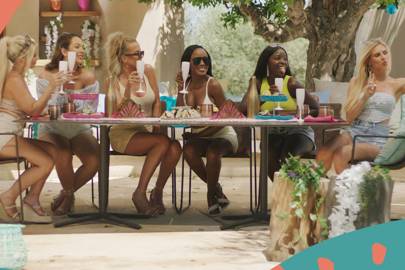 On last night’s episode of Love Island, contestants played a game which involved guessing everyone’s interests. This being Love Island, and the inevitable backdrop of who is whose ‘type on paper’, the chat quickly turned sour. Hugo said his type was ‘not fake’, saying he preferred women who weren’t ‘fake in personality or looks’, blatantly criticising women who choose to have cosmetic treatments.

This was met with furious reaction from fellow islanders Faye and Sharon, both of whom have discussed having had cosmetic procedures including breast and bum augmentations, as well as lip fillers and Botox.

“It’s such an unfair comment,” responded a furious Sharon, while Faye commented: “Get educated on why girls get work done.” When approached by an apologetic Hugo after realising the offence he’d caused, Sharon said: “I wouldn’t turn around to a guy and say, ‘I wouldn’t date you because of your race’”.

Let’s get one thing clear here. Women’s physical appearances are still judged in a patriarchal and misogynistic sphere, particularly when it comes to the heterosexual dating landscape. Our faces, our bodies, our hair – it’s seemingly all up for debate, especially on a reality TV show. Throw society’s unrealistic and toxic beauty ideals into the mix, and it’s no wonder these women got defensive. We tell women to look a certain way, and that they don’t look good enough the way they are; then when she wears makeup, edits her photos or gets tweakments, we judge, mock and abuse her.

The stigma around cosmetic surgery is real, and it needs to stop. Every woman has a right to do what she wants to her face and her body without judgement.

After six years on the air, has Love Island learnt from its past mistakes? Here’s why this season must do better, and why we as viewers must be kinder

The issue is comparing surgery discrimination to racial discrimination: the former of which is a personal decision and most certainly not a hate crime; and the latter of which has led to untold suffering across cultures for centuries.

This is especially marked on a TV show which has done so little to protect its Black contestants. Racial discrimination has subliminally reoccurred on the show in discussions of preference, at the expense of Black women. The blindness to these blatant mistreatments reflect how Black female contestants are overlooked here, making Sharon’s comparisons of her cosmetic discrimination to one based on racial ideals an ignorant – and dangerous – one to make.

It was particularly poignant given the fact that, during the ‘what’s your type?’ game, the two Black women on the show – Rachel and Yaz – were excluded. This expresses a cycle of rejection Black women on the show past and present have been subjected to. From Hugo’s ‘naturally leggy blonde’ remark to Jake’s chants of loving ‘blondes with blue eyes’, the topic of preference remains a toxic one that has ostracised black women above all.

Love Island’s lack of diversity is not a disservice to Black women; it’s actually doing us a favour. Here’s why…

This happens time and time again as producers of Love Island fail to understand that their efforts in diversifying the show doesn’t simply fall on casting one or two black members each series, but on the attitudes of the cast. In opting for men who do not waver past ignorant ‘blonde or brunette’ ideals, the show remains stagnant in progression and harmful to the Black female members chucked in the line-up. They are constantly put in uncomfortable positions whereby ‘type’ is used as a cruel conversational meter that sets them aside. It’s to the point where that question doesn’t even feel relatable or inviting enough for Black woman to engage in when placed in TV shows that aren’t accommodating to us.

For them, this is the extent of the prejudice they face whereas for women of colour, it runs deeper

If we do show a spark of personality, we’re labelled “feisty” or “sassy”, as Chuggs described Rachel on her arrival. These comments are just as harmful, casting black women as racial stereotypes that don’t allow us to exist individually with depths of character. The white women cast can sit openly in their discontentment and be regarded well for doing so, gaining successful reputations off of their attitudes like former members Olivia Attwood and Maura Higgins. It would explain why Rachel and Yaz – instead of reacting to either Hugo or Sharon’s comments – found themselves consoling the two white women. Perhaps they reacted in such a repressed way as to not stoke the ‘Angry Black Woman’ trope that follows us around if we react otherwise.

Their silence in the face of discrimination does not mean Black women find it easier to deal with than white women outwardly upset by theirs down to cosmetic surgery. For them, this is the extent of the prejudice they face whereas for women of colour, it runs deeper. As has continued with the show, Black women are marginalised for their natural physical appearance and so to compare Botox bias to racial discrimination is laughably ignorant at best, damaging and dangerous at worst.

A movement, not a moment. Here are the best books, podcasts and films to help educate yourself about race and anti-racism