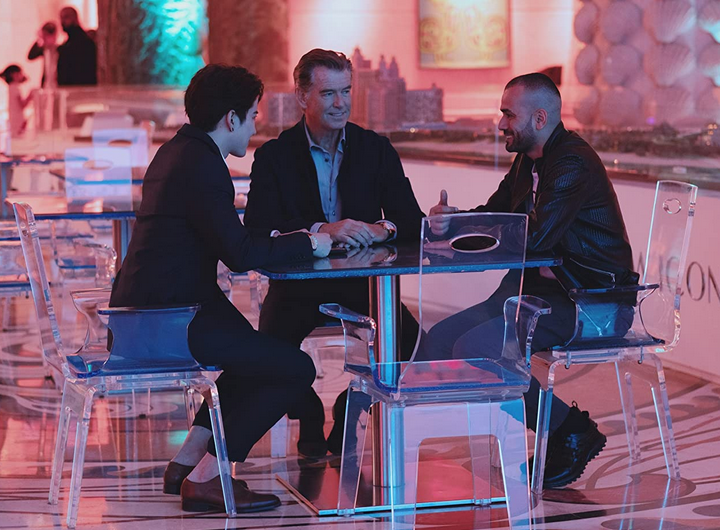 It’s going to take a group of distinctly unique mavericks to take down a rogue businessman and egocentric government agents who are obstructing both personal freedoms and world peace in the new action film, ‘The Misfits.’ The ensemble thriller is led by a diverse cast of international action superstars, including up-and-coming actor, Mike Angelo, who play fearless anti-heroes courageously pursuing both their personal and societal goals and dreams.

The movie is now playing in theaters and on VOD nationwide, courtesy of The Avenue. The adventure drama was written by Kurt Wimmer and Robert Henny, and directed by Renny Harlin.

‘The Misfits’ follows Richard Pace (Pierce Brosnan), a brilliant international thief who manages to find his way out of a federal maximum-security prison. His daring escape and high-octane car chase allows him to elude the FBI and police, but ends with him being scouted by the title group, which acts as a band of modern-day Robin Hoods.

Led by the eccentric and charismatic Ringo (Nick Cannon), and aided by Violet (Jamie Chung), the Prince (Rami Jaber) and Wick (Angelo), along with Richard’s daughter Hope (Hermione Corfield), the mysterious group does devious things for all the right reasons. The skilled group convinces Richard to join them as they set out to pull off the heist of the century: stealing millions in gold bars that are kept under one of the most secure prisons on earth, which is owned by rogue businessman Schultz (Tim Roth), and is used for funding terrorist groups worldwide. Aside from the money, Richard wants revenge against Schultz, the man who was behind his incarceration. From L.A. to Abu Dhabi, it will take supercharged engines, forged identities, multiple cons, camels, nitro and massive explosions to succeed.

Angelo generously took the time recently to talk about starring in ‘The Misfits’ during an exclusive interview over Zoom. Among other things, the actor discussed that he was in part drawn to play Wick because he not only enjoys action films, but he was also intrigued by the opportunity to shoot the feature in several different locations, including Dubai, Abu Dhabi and L.A. He also noted that once production on the thriller began, he embraced the opportunity to work with Harlin on developing his character, particularly on improvising dialogue on the set.

The conversation began with Angelo explaining why he was interested in playing Wick in ‘The Misfits.’ “When the role came to me, I read the script and totally fell in love with the character. It felt right for me, as I love action films, and this is such an action-driven film.:

Speaking of the action sequences that appear in the movie, the performer shared that “I love the car chase in the desert, so that scene was pretty epic to me. I’ve never seen a desert in my life, so that was a good experience for me. Riding on the camels was also very fun!”

Speaking of the desert, Angelo shared that as an actor, he likes shooting in different locations, which he was able to do while filming ‘The Misfits.’ “I love going to different locations because it doesn’t feel like work; it feels like you’re on holiday. We worked some days, and then had other days off, so it was more like relaxing work. We had a good experience and time with the team,” he revealed.

The performer also shared that he enjoyed working with Harlin as the drama’s director throughout the production. “Renny had a clear picture of what the movie was going to look like. So when we were shooting, the production went really fast,” he shared.

“I often talked to him on set because he’s open to hearing new ideas, and I had a lot of ideas. So I asked him if I could do certain things, and add certain lines to the script,” Angelo also revealed. “I enjoy improvising because I think it gives a more interesting feeling to my characters.”

Besides enjoying his experience working with Harlin during ‘The Misfit’s production, the actor also appreciated having the opportunity to collaborate with his ensemble cast of co-stars. However, the performers didn’t have much to rehearse together once they arrived at each of the film’s location.

While the thriller is now playing in theaters and on VOD here in America, the Thailand native hasn’t had the opportunity to watch the feature yet. But he’s looking forward to hearing what audiences who have seen the film think about it on social media.