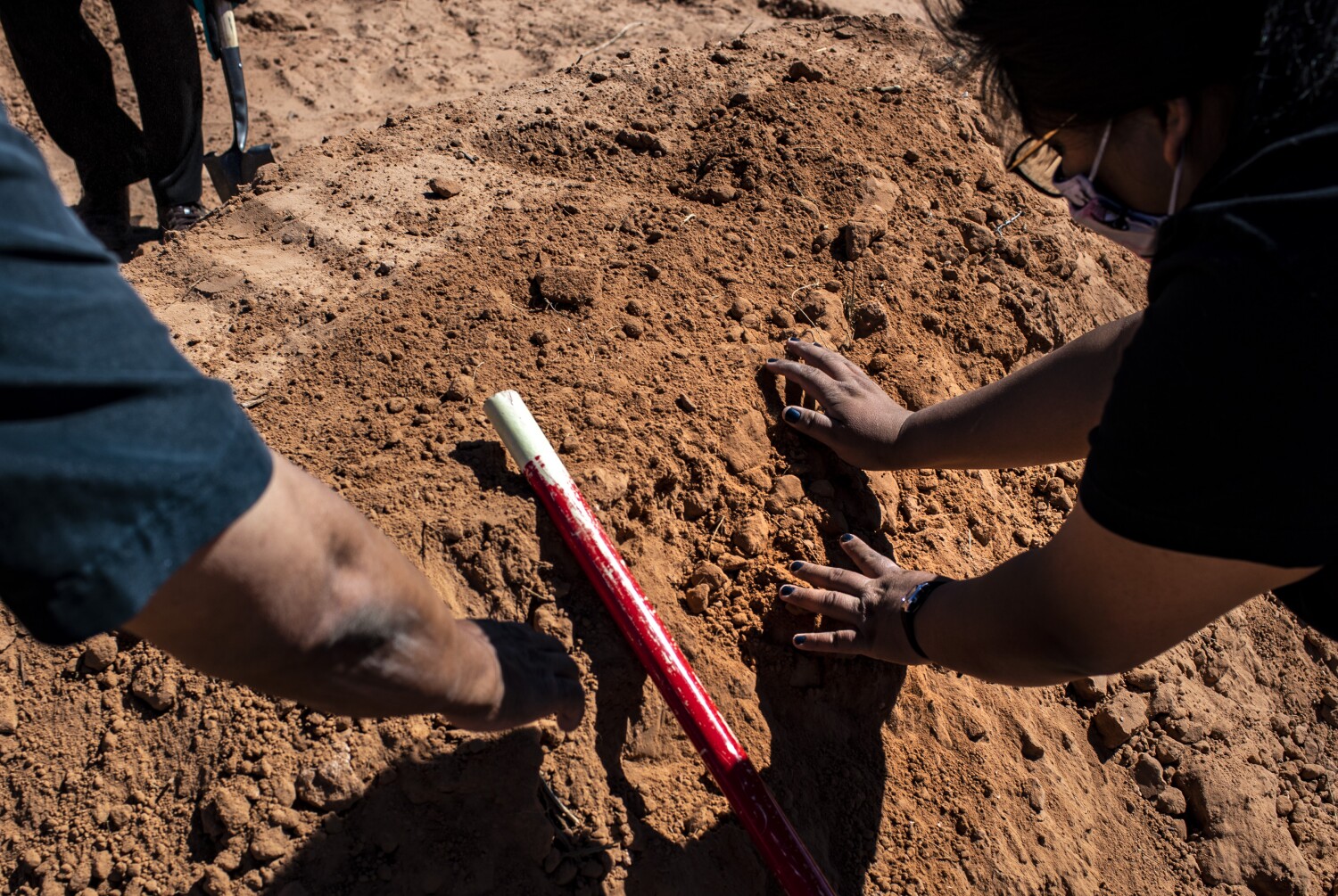 Curtis Zunigha remembers shedding tears when he heard the age of one Native American whose remains were part of a reburial ceremony in Ohio several years ago.

It was a girl, 11 when she died. Her young age, which reminded Zunigha of his granddaughter, along with the girl’s inclusion among the many Indigenous people throughout U.S. history who experienced indignities such as being moved from their homelands, left him shaken.

“I was emotionally distressed,” he said during a recent telephone interview.

Zunigha, cultural director of the Delaware Tribe of Indians, said the experience illustrates the long-lasting effects of the country’s history and the ongoing importance of the Native American Graves Protection and Repatriation Act, or NAGPRA, which was passed in 1990. The law mandates institutions receiving federal funding must return Native American remains and cultural items to tribes and Native Hawaiian organizations.

The Delaware Tribe of Indians expects the remains of nearly 200 ancestors to be reburied at the Pennsbury Manor near Philadelphia in the fall and thousands of belongings to be returned.

Nationally, there are almost 200,000 human remains of Native Americans that have been identified under the law, according to the National Parks Service. Remains have been uncovered in all 50 states and are now on display in museums, in university labs for anthropology research and tucked away in boxes in the back of closets across the country.

The Department of the Interior in July announced new proposed regulations for the protection and repatriation law to clarify the process as well as take the burden off tribes to initiate and complete the required steps. The federal government is consulting tribes and Native Hawaiian organizations about the new proposals and will open them for public comment in October.

The Delaware tribe has been working for years to bring its ancestors back home.

The remains of possibly hundreds of ancestors of the tribe, known as the Lenape people, were removed from their graves at the Abbott Farm Complex in New Jersey in the 19th and 20th centuries.

“We get buried in the ground, and our spirit carries on,” Zunigha said. “And in many ways, we like to stay right there — in an area where we’ve always been in.”

But when a burial site is disrupted, so is the spirit, he said. It cannot continue on the spiritual journey without proper burial rituals.

Census data show American Indians make up only 1.3% of the U.S. population, but hundreds of tribes and more than 1,000 institutions are involved in caring for the return of remains.

The return process is known as repatriation, and seems straightforward at first glance: identify Native American remains and cultural items in the institution’s possession, determine which tribes they belong to, then give them back. But a single repatriation can take years and be fraught with complications and dispute over what evidence is needed and who deserves to rightfully claim Native American remains and items.

When Congress passed the act in 1990, it anticipated, and wrote into law, that creating an inventory of all Native American remains and items would take five years. Only 42% of museums surveyed nationally by the University of Denver’s Museum of Anthropology last year said they had finished their inventory. The museum has worked closely with tribes in recent years, hosting a conference with the nonprofit Assn. on American Indian Affairs in 2020.

Nearly 60% of the remains and other items covered by NAGPRA have not been returned during the last 31 years, according to federal data.

Zunigha says the return of human remains is important not only for spiritual and cultural reasons, but also as a matter of basic human rights.

“The Lenape people and American Indian people have no less right to be treated with respect and dignity, just as any other nation,” he said. “How would white America like it if I led an all-Indian archaeological team into Arlington National Cemetery because I wanted to study some great Revolutionary War hero’s life?

“I wouldn’t even get past the gate.”

More than half of unreturned remains and items in the country are classified as “not culturally affiliated,” meaning the institution determined it can’t identify them as belonging to one of 574 federally recognized tribes with the evidence they have.

The law says it is the institution’s responsibility to initially connect a tribe to the Native American remains and cultural items in its possession, often through evidence such as burial dates, geographic region and how deep remains were buried. But if a museum decides that remains or belongings can’t be identified with a tribe, the burden of proving that identification shifts to the tribes. After that point, institutions are no longer responsible for reaching out to them.

“There’s no requirement for museums to consult and make decisions about those culturally unaffiliated individuals,” said Anne Amati, NAGPRA coordinator with the University of Denver Museum of Anthropology. “I think that’s one of the reasons why there’s so many of those individuals who have not been repatriated.”

Brice Obermeyer, the Delaware tribe’s historic preservation officer, said that the tribe had to search for ancestors itself, and that it started by painstakingly searching the national inventory to find every conceivable institution where the tribe could find them.

Tribes and institutions in possession of remains or funerary items said a lack of money and time was the biggest obstacle delaying implementation of the law, the University of Denver found. Many museums only have one or two staff members assigned to coordinate compliance with NAGPRA. While the new proposed regulations don’t address costs, the National Park Service gives grants to encourage compliance with the law, and awarded almost $2 million to 12 tribes and 18 museums in 2020.

Harvard University’s Peabody Museum has the remains of more than 6,000 Native Americans and 13,000 funerary objects, many of which are in storage, that haven’t been identified as belonging to particular tribes.

Yet, more than 96% of Harvard’s unidentified collection has been traced to a geographic region, which the law lists as a type of evidence to prove tribal association.

The Assn. on American Indian Affairs rebuked Harvard in a letter in February for “its unconscionable delay in fulfilling its legal obligations.” The association accused the university of purposely not complying with the law, putting the burden on tribes and delaying repatriation by repeatedly asking tribes to present more evidence beyond what is required by law.

The letter came after Harvard’s apology for not facing its Colonial history and practices. Harvard responded with a letter in March and acknowledged its track record wasn’t perfect, but disputed it was willingly not compliant with the law: “The museum has no interest in subverting or delaying NAGPRA’s implementation. Our Museum is not the proper place for these remains, and we are committed to their return,” the letter reads.

Many types of evidence to prove affiliation exist in addition to geography: kinship, biological, archaeological, anthropological, linguistic, folkloric, oral traditional and historical. In its letter to the association, Harvard said, “These lines of evidence, not geography alone, are critical to affiliation.”

Gaps in information shouldn’t prevent tribal identification, the National Park Service said. But there is disagreement on how remains should be affiliated.

“Some institutions are looking for much more information, much more evidence, and putting a higher standard of proof than what is required by the law,” Amati said.

The law requires institutions to consult with tribes before completing inventories and declaring whether remains have been identified with a tribe, but the University of Denver survey found only a quarter did so every time.

Tribes can often provide key knowledge that institutions don’t have: When the Delaware tribe contacted a museum about repatriation, the institution had identified a fragment of wood as a coffin. When the tribe took a second look, it immediately knew that the wood was a grave marker, not a coffin — a funerary practice that’s still used today. The grave marker was a clear line of evidence to connect the remains to the tribe.

In his 25 years as an anthropologist, Obermeyer said he’s seen a shift of reverence toward tribes and their ancestors.

The Delaware tribe expects to finish its process soon and rebury its ancestors in October. The tribe was fragmented into different bands after being forced from its homeland by European settlers. Despite their distance, the bands remain a part of the same tribe.

“We are like different branches of the same tree trunk,” Zunigha said. “And that tree trunk is rooted in the homeland.”