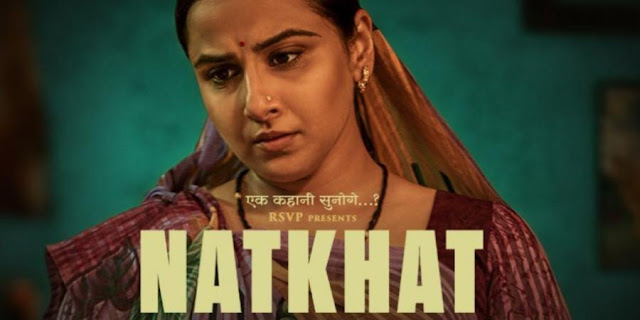 Short films offer a great platform for young and upcoming
filmmakers to showcase their talents. But, making a short film is always a tricky
proposition. For, the financial prospects are quite uncertain. However, the one
thing that drives such productions is passion as the constant threats and fears
often serve as fuel that end up stirring the deepest artistic urges of the
filmmaker. One thing, however, is more or less certain. What these films lack
in scope they more than make up for it in terms of vision. Of late, the short
films are becoming more and more mainstream with big names from the Hindi film
industry joining the bandwagon. Also, the pandemic has given a further fillip
to this emerging trend of making short films with established stars. Natkhat,
co-written and directed by Shaan Vyas, is a fine example of what storytellers
can achieve using the short film format.

Natkhat stars Vidya
Balan in the role of a mother who takes it upon herself to teach her young son
an important lesson about gender equality that he will never forget. The short,
co-produced by Vidya Balan and Ronnie Screwvala, has already traveled to many
international film festivals. Ever since its premiere at the ‘We Are One: A
Global Film Festival’ last year, Natkhat has found a spot on many a
most-anticipated short films lists. The short film is now being streamed by
Voot Select as part of Voot Select Film Festival—a direct to OTT Film Festival
that will showcase more than 15 critically acclaimed movies across genres over an
eight day period.

The Shaan Vyas
directorial succeeds in singularly pointing why despite so many reforms and new
laws patriarchy has still managed to endure in our society. Let’s try and examine
the story of Natkhat to understand this better. The short follows Sonu
(portrayed by Sanika Patel) who one day along with his friends at school
decides to teach a girl a lesson she would never forget. At dinner time when
the grown-ups discuss a female politician who is causing them some trouble,
Sonu offers them a suggestion with the ghastly admission of the sinister act he
committed at school. The bunch of boys had taught the girl who had dared to hit
one of them a lesson by dragging her to the woods and threatening her to cut
off her pigtail. When he offers the same advice to the grown-ups at the dinner
table in order to teach the female politician a lesson, the father (essayed by
Raj Arjun) gets up in a fit of rage to scold his young son but he is stopped by
the grandfather (played by Atul Tiwari). The old patriarch consoles his enraged
son by reminding him about the boy’s gender privilege: “Boys will be boys. What
do you expect? Will you crucify him for this?”

Now, the servile mother
(essayed by Vidya Balan) in a ghunghat is listening to the conversation from a
distance. She is not even allowed to sit and eat with the men of the family
even as she serves them hot food and rotis. She can only eat inside her room after
they are finished. But even from within the ghunghat we can sense her dread and
uneasiness on hearing her son’s ghastly admission of an act he committed at
school. She is deeply disturbed by the toxic machismo her young son with an
impressionable mind is in the process of inheriting from those around him. So
she takes matters into her own hands and decides to teach her son the
principles of equality using the age-old art of bedtime stories.

Natkhat is a powerful
reminder that the root cause of all oppression that women are subjected to in
our society is a direct result of patriarchy. What children see while growing
up has a lasting impression on their impressionable minds. Their conditioning
already begins long before they even realize it.  By the time they grow up into adults the
damage is already done. If, however, the parents can make conscious efforts to
educate their children about the importance of gender equality then the dark
influences of patriarchy can be greatly mitigated.

There is so much that
remains unsaid in Natkhat and so the onus is on the actors to convey the same
non-verbally and they are up to the mark. In particular, Vidya Balan, Raj Arjun
and young Sanika Patel need to be commended for their brilliant performances in
the short film. It’s really heartening to see a leading Bollywood actress like
Balan taking such keen interest in a project like Natkhat and not just as an
actor but also as a producer. While there still there is still a long way to go
before the short films start enjoying the same reverence and recognition that’s
generally associated with feature films, Natkhat proves that short film format
is more than capable of delivering a strong message in a most effective manner
possible.