Wendy Williams may not be doin’ well, but the show must go on.

As previously reported, Wendy Williams has been on a hiatus from her talk show due to health complications. As a result, the newest season of The Wendy Williams Show was pushed back numerous times and led by ‘an exciting lineup of guest hosts and panels.’

However, despite Wendy Williams’ absence, the show’s ratings have increased by 33%.

Now, the 57-year-old host, who has yet to return to her infamous purple chair, may allegedly be replaced by host Nick Cannon’s new talk show in the 10 am time slot.

A close source tells The Sun,

“If The Wendy Williams Show ends or she doesn’t come back to the show, they would feel comfortable sliding Nick into the 10 am slot which immediately follows the local news broadcast.”

“That is the plan for filling the time in the New York market. Other stations around the country that similarly carry both shows back-to-back will likely follow New York’s lead.”

“It really all depends on what her ratings look like at that point. Right now, they’ve been stronger than expected without her.”

At this point, there is no indication for when Williams will return but on Monday, Wendy Williams took to Instagram to give fans an update on her situation. On IG, the host wrote,

“HOW YOU DOIN’? I MISS YOU ALL! As everyone knows, my health has been a hot topic. I’m making progress but it’s just one of those things that are taking longer than we expected. I’m a woman of a certain age, and I know enough to listen to my doctors and will return to my purple chair as soon as we all agree I’m ready.” 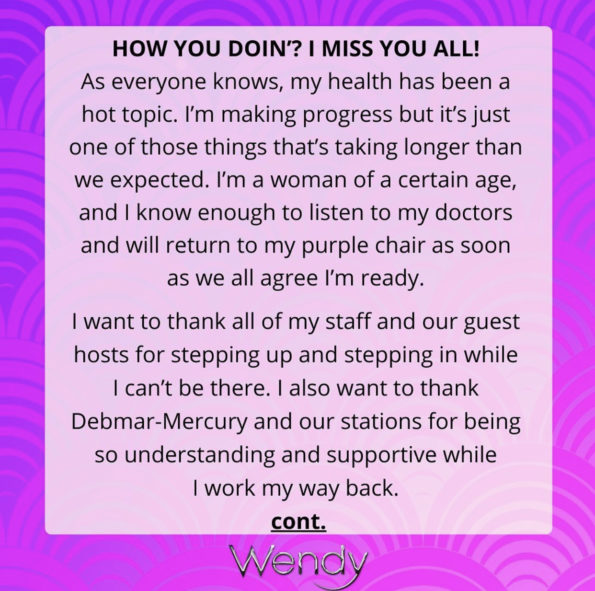 “I want to thank all of my staff and our guest hosts for stepping up and stepping in while I can’t be there. I also want to thank Debmar-Mercury and our stations for being so understanding and supportive while I work my way back. Most of all, I want to thank my fans. I have heard your prayers and comments and feel all the love! You are everything to me. I love spending my mornings with you all and I’m doing everything I can to get back to work, but right now Wendy has to focus on Wendy. I love you for watching.” 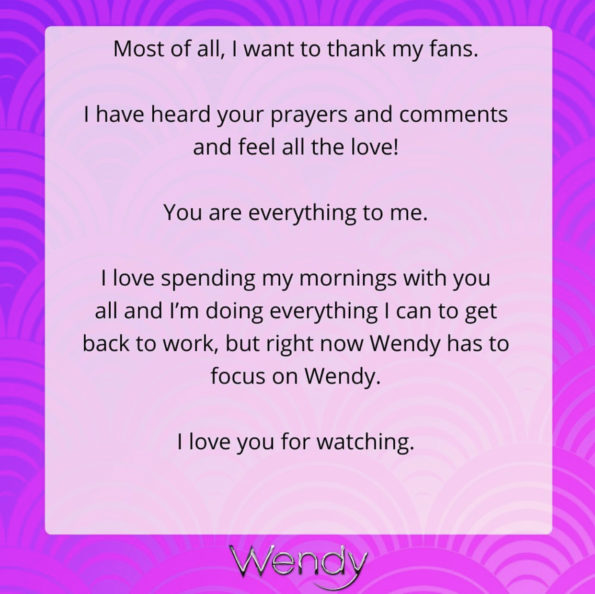