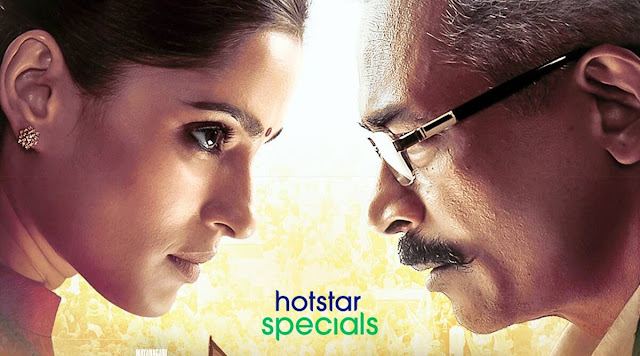 Following the strong performance of Season 1 of
political-drama City of Dreams, the show now returns to Disney+ Hotstar with an even bigger, unmerciful, and brutal
familial political tussle than before. Reprising their powerful characters,
actors Atul Kulkarni and Priya Bapat return as Ameya Rao Gaikwad
and Poornima Gaikwad, the father-daughter duo willing to cross any line to rise
above the other. Lauded for their standout performances in the last chapter,
actors Eijaz Khan and Sachin Pilgaonkar also re-join the
ensemble cast as popular actor Sushant Singh joins the cast this season.

In the Disney+
Hotstar and Applause Entertainment
show, acclaimed filmmaker Nagesh
Kukunoor returns withanother nail-biting season of the series City
of Dreams, showcasing how a determined and fearless Poornima’s fight
against patriarchy continues as she locks horns with her father; to gain control
over the Chief Minister position. As the state and its people become helpless
victims of this ruthless battle for power – enduring pain, loss, and hardship;
the question is – who will win the state’s ultimate throne? In this fight for
power they are willing to put their beloved rajya
at stake. Will the seat lose its meaning in this cut-throat father-daughter
political tug-of-war and change the lives of the Gaikwad family forever? Find
out who comes into power in Hotstar
Specials presents City of Dreams Season 2,  set to launch on 30th July 2021 for all
subscribers of Disney+ Hotstar. The
show is produced by Applause Entertainment in association with Kukunoor Movies.

Actor Priya
Bapat said, “Poornima Gaikwad is
inspiring and admirable, and it has been heartening to see how the character
has appealed to audiences, especially women who found her empowering. In the
second season, audiences will see an even more daring, grittier, and determined
Poornima whose political ambitions take precedence over anything else. I am
very proud to be essaying such a strong female role who drives the narrative of
the show, shatters stereotypes, and fights against all odds to strive in a
male-dominated world. I hope viewers relate to her and the unwavering
commitment she exhibits in City of
Dreams Season 2, as she continues to stand up for herself and what she
deserves.”

Actor Atul
Kulkarni said, “Ameya Rao Gaikwad is
a special character for me and I am delighted that audiences get to see more of
him, and his story. There’s an almost sinister quality to him which makes his
desire and resolve to hold a position of power is stronger than his sense of
family bonds. If the brother-sister battle for politics  in season-1 was shrewd, then the father vs
daughter tussle in City of Dreams Season
2 is going to be doubly intense.

Director Nagesh Kukunoor said, “It was overwhelming to see the
appreciation that City of Dreams S1 received,
and how viewers got invested in the life of the characters. As the story of the
political power battle in the Gaikwad family goes forward, I hope that we can
live up to the audience’s expectations! It’s going to get murkier and personal,
and the fight for power is going to destroy many households.