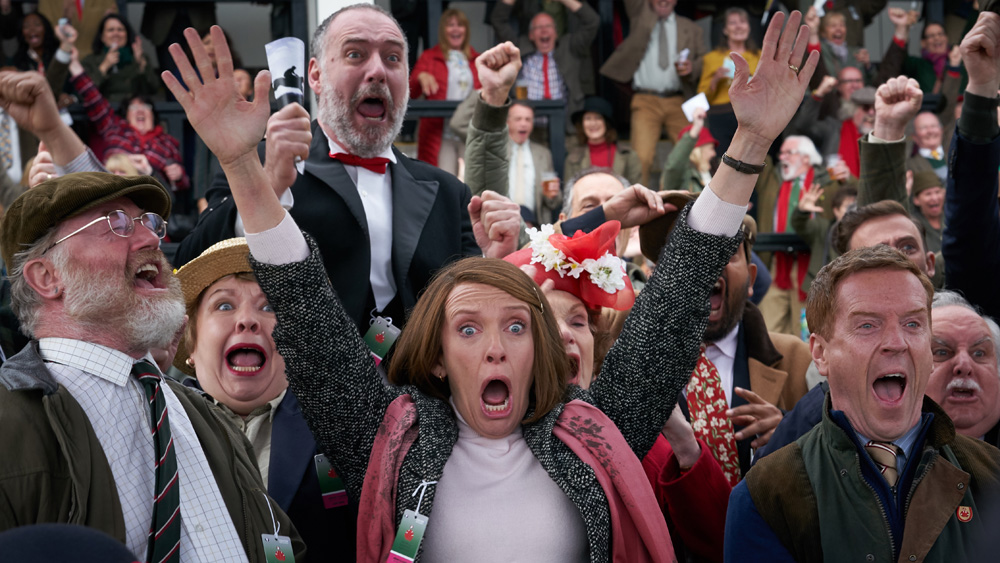 If you’re like me and are tired of haphazardly clichéd sports dramas, especially regarding horses, then I’d reckon you’d be surprised as to how good Euros Lyn’s Dream Horse is. And while it doesn’t reinvent the wheel in terms of storytelling, its perfectly balanced structure of heart, humor, and drama allows it to soar beyond any conceivable sphere of predictability. The film follows Jan Vokes (Toni Collette) as she decides to breed a racehorse based on a true story. She convinces her neighbors to form a syndicate and chip in on the horse with the help of expert Howard Davies (Damian Lewis). The mane gives birth to “Dream Alliance,” which becomes an unlikely race horsing champion, overdelivering in Jan’s investment and making a small Wales town proud. If you’ve seen any racehorse (or horse) film, you’ll likely know how it ends: the racehorse (and the town) will overcome major adversity and will ultimately win the biggest (or most daring) race of his career. However, it’s the journey that makes Dream Horse such a pleasant watch and one of the best feel-good movies of the year.

“Feel-good” is a term I rarely pull out. Not to sound snobbish, but how exactly can a movie make you “feel good”? First, there needs to be some form of joy inside the frame, either from its script or the acting. Better yet, both! And guess what? Dream Horse finds that joyful exuberance through its sharp script and marvelous acting. Everyone is on the top of their game here, most notably Toni Collette, who gives a rather quiet performance as Jan Vokes but showcases her eclectic talents better than in any film she’s been in recently (minus Hereditary). Here, it’s Jan’s belief that Dream Alliance will bring great success and prosperity for the town in a race, even though he has about a 1% chance of competing, that drives her throughout the entire film. Damien Lewis is also excellent as Howard Davies. Still, his arc is too formulaic for him to soar past Collette and other supporting actors that embody the town’s purely joyful spirit. You’re not just observing how a town bonds over a horse, but how an extended family is forged over a single bond. And that horse allows for greater quality of life in the town, lifting its citizens’ morose spirit up just when they needed it.

At first, the syndicate only wants to make money off of Dream Alliance, with Jan being the only person who sees something special in the horse. But as the film progresses, and as Dream Alliance battles adversity, the syndicate starts to see that it’s not only about money but about the horse. And what a horse is Dream Alliance! I mean, every single race he does is not only amazingly predictable to watch but gripping at the same time. Of course, it’s kind of an oxymoron to say this, but there isn’t an instance in which I wasn’t emotionally invested in the story. The characters slowly pull you into a secluded Welsh town with a strong sense of community as they widen up to the rather snobbish, aristocratic world of horseracing with a pure Dream. Because of this, Dream Horse feels particularly human and raw in its emotional power. The comedic sequences are uproariously funny; the dramatic sequences hit the right emotional notes to make you bubble up on almost perfect cue. These dramatic moments are amplified by Benjamin Woodgates’ score, highly reminiscent of the work of John Lunn’s Downton Abbey compositions. As Dream Alliance races on, the reverb amps up, and the piano starts to flame up as if it was on fire. It’s a rare work of beauty from a film that feels so simplistic.

Mainstream films rarely seem to innovate these days, and when they do, they badly underperform at the box office. Audiences need a safe formula for them to really like something, not a film that breaks everything they know about the cinematic language and challenges their viewpoints. Dream Horse doesn’t do any of that: it follows the safest story possible, making it falter in some areas. While the character relationships are strong, the story isn’t necessarily that innovative. Howard Davies has typical troubles with his wife, who believes he’ll lead them to further debt while betting on Dream Alliance to win races, as he tries to prove to her that “this isn’t like the last time,” to which they’ll bicker until her wife proves him right, and then something magical happens that makes them reconcile. Where have you seen that before? Oh yeah, in almost every gambling movie ever (Uncut Gems only dared to subvert that storyline, brilliantly, in fact). The same thing with the overarching plot on Dream Alliance. We know exactly what’s going to happen from the moment he gets born: he was born to be great and will accomplish miracles, even in the face of rejection, injury, and adversity.

But, strangely enough, the film’s perfunctory storyline didn’t really matter for me. Instead, I was swept away by its brilliantly written characters and a wonderfully balanced script that hit every single note for me. I’m not one to like “feel-good” or “comfort” movies, as I think these terms don’t reflect cinema as a visual and aural medium, but damn. Dream Horse is, no pun intended, an almost dreamlike picture, made in the same vein as Seabiscuit or Secretariat–two modern staples of the horseracing sub-genre. So, if you’re looking for pure escapism in these [still] crazy times (get vaccinated, what are you waiting for!), then this just might be it.