After first mentioning a mystery woman to his fans and followers earlier this month, revealing she actually suggested that the terrifying robbery that took place at his $7.9 million Encino home was nothing more than a “scam,” Paul returned to his social media page, where the Real Housewives of Beverly Hills cast member offered a “C..T of the week” update.

“This total nut job who runs the Insta and Twitter ‘My Feet On Fleck’ is [in fact] a PR consultant by the name of [redacted] … her company is called [redacted] Communications based here in LA,” PK shared on Instagram on November 8. “I do not know her, have never met her, and indeed nor has my wife …. she is also behind the other harassment / hater sites with such pleasant names as ‘Karen Hugers Mole,’ Brielle’s Blow J*bs,’ and of course ‘My Feet On Fleek.’”

According to PK, he believes the woman also has other hate accounts but has yet to uncover them.

“Now she has been abusing my family, spreading lies and defamatory remarks for years … turns out she’s been doing it to many other public people (ALL ANONYMOUSLY) whilst mostly on Twitter but more often than not repeated on Instagram .. many of these other celebrities I know personally and some have reached out to me telling me of their own anxiety’s caused by her,” he continued. “This is what she does, posts a vile abusive comment and then uses her other sites to agree and comment, thus creating the feel of a community and following … so she’s like some crazy person who has conversations with herself hoping to garner some traction and spread her lies hoping they may catch on.” 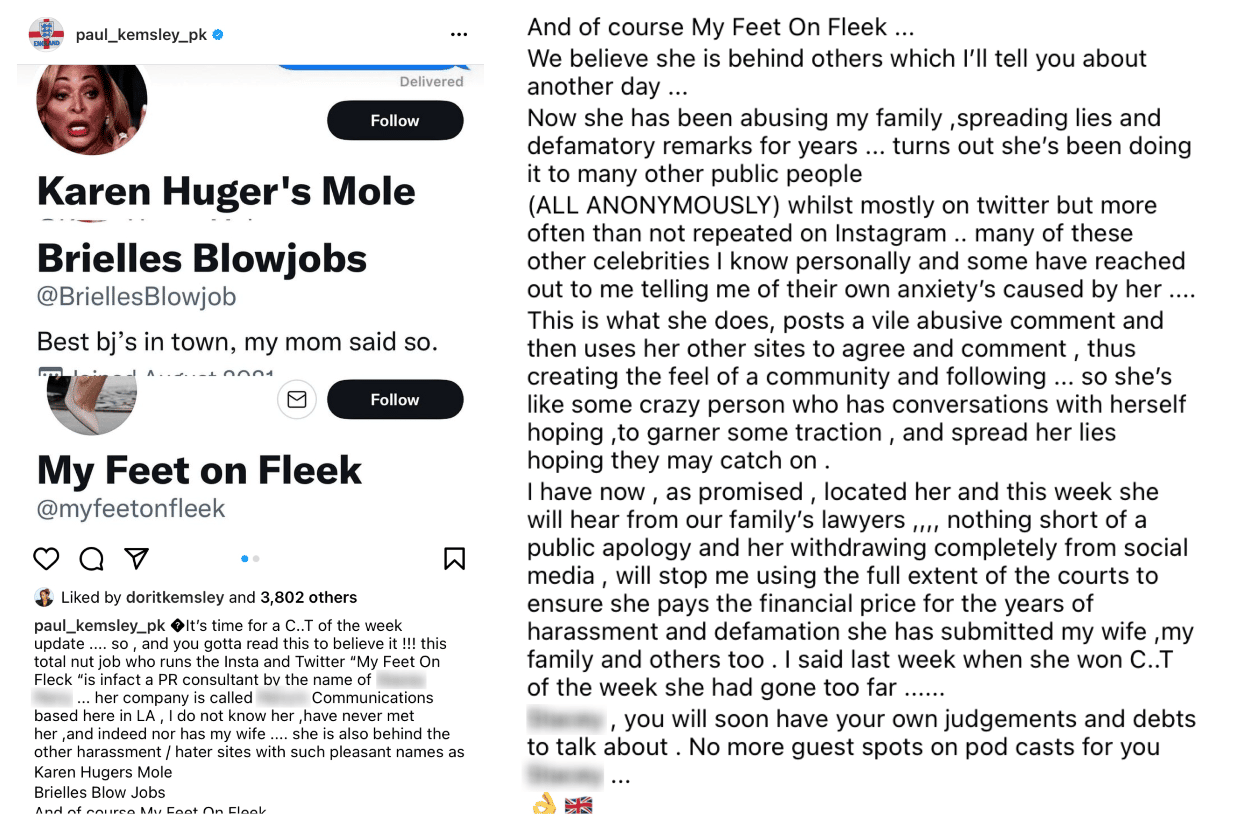 Because of the harassment he claims he and others have received from this woman, PK says he has decided to have his lawyers reach out to her in an effort to get her to not only offer a public apology, but also stop using social media completely.

If the woman doesn’t oblige to the request, PK said he will use the “full extent of the courts to ensure she pays the financial price for the years of harassment and defamation she has submitted my wife, my family and others too.”

As RHOBH fans well know, Dorit told cops she was held at gunpoint and robbed at the end of last month as her two children, 7-year-old Jagger and 5-year-old Phoenix, slept in another room.

“As you all know by now I have been through a terrifying ordeal, one that no parent or person should ever have to experience. I’ve received so many messages of love and support and I thank you all from the bottom of my heart,” she wrote on Instagram after the incident. “My kids are unaware of what happened, they slept through it and I thank God for keeping my kids and myself from being physically harmed.”

The Real Housewives of Beverly Hills season 12 is currently in production.