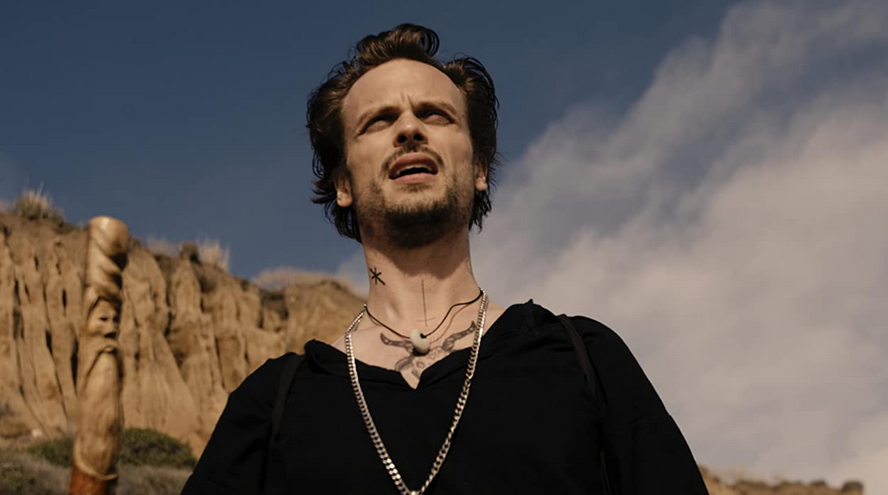 Embarking on a soul-searching journey back to their hometown is often a powerful rite of passage for many adults as they start reflecting on their pasts in order to prepare for their futures. That’s certainly the case for Matthew Gray Gubler’s protagonist in the new comedy, ‘King Knight.’ The movie follows the actor’s character as he contemplates how his previous choices, as well as his spirituality and devotion to his tight-knit group of like-minded free spirits, will influence his next major life decisions.

The comedy is having its virtual world premiere today at 7pm ET at the Fantasia International Film Festival. It will have its second virtual screening this Tuesday, August 10 at 9am ET.

‘King Knight’ follows life partners Thorn and Willow (Gubler and Sarafyan), who are high priest and priestess of a coven of witches in a small California community. When Willow discovers a secret about Thorn’s past on the night of their Beltane celebrations, their lives are thrown into turmoil. As a result, the duo, as well as the rest of the members of their coven, must learn how to trust each other again and move on with their lives.

Bates generously took the time recently to talk about writing, directing and producing ‘King Knight’ during an exclusive interview over the phone. Among other things, the filmmaker discussed that he wanted to make a unique genre movie about the lighter elements of witchcraft in the heightened sense of reality that has become his signature style. He also mentioned that he’s thrilled that the comedy is having its virtual world premiere during this summer’s Fantasia International Film Festival.

The conversation began with Bates discussing why he was inspired to pen the movie’s script. “The inspiration for this movie came after I finished my last movie, ‘Tone-Deaf.’ I was trying to figure out what exactly to do next, and with all of the political and social turmoil going on, everything seemed so ominous. So I knew that I needed to make something that would make me happy, and hopefully make other people happy,” he shared.

“I knew that I needed and wanted to go in a lighter direction, so I tried to figure out exactly what to do. I had been pitched for a movie about an evil witch, but I kept thinking, I really like witches,!” the scribe revealed with hint of a laugh.

“So I thought, okay, I’ll make a witch movie. But the witches are going to be the protagonists because frankly, some of the loveliest people I know are witches,” Bates continued.

“So the idea was to start from there. Most of my movies take place in a heightened sense of reality. But I also usually take a cynical approach. With this movie, though, I knew I had to strip myself of all of that cynicism,” the writer also shared.

“I was trying to think of a movie that makes me happy, and I went back to John Waters movies from the ’90s. There’s one called ‘Pecker’ that I’ve watched so many times. It’s silly, provocative and occasionally perverse, but it’s also sweet, and that’s what made it special, and why I keep returning to it,” Bates added.

“You can tell that (Waters) loves every character (in ‘Pecker’), despite their flaws and insecurities. So I had to make sure that I also loved every character in my film,” the scribe noted.

“Having grown up in the South, the very idea of witchcraft is evil. So a reason to make this movie was to show audiences that witches are no different than anyone else; quite frankly, they’re searching for the same answers to the same questions as everyone else,” Bates pointed out.

“I knew the only way to win people over was to not preach to them, and make the witches holier-than-thou; instead, I knew I had to treat them like normal characters in any comedy I would make. So that was the inspiration for the movie,” the writer added.

Besides scribing ‘King Knight’s screenplay, Bates also embraced the experience of directing the feature. “I knew that it was going to be hard to find financing for a movie about nice witches, in which there aren’t any murders, and no one dies. So I said, ‘I’m just going to make it myself.” I used my own money and took out a loan.

“That afforded me the opportunity to do what I wanted on the movie. Sometimes when you direct a film, you don’t always have control over everything. But by also producing this movie, I got to have more control,” the filmmaker shared.

Bates then further delved into the process of being both the helmer and a producer of the film, which he admitted with a laugh was “a lot of work! There was a lot more work than I had anticipated. The last time I had really gotten into producing was years ago,” on his 2015 horror comedy, ‘Suburban Gothic,’ which also starred Gruber.

“Producing is a lot of work. My friend, Colin Tanner, helped a ton on the movie, as he was also a producer,” Bates continued.

Despite all of the hard work that went into producing ‘King Knight,’ the filmmaker divulged that as a producer and the director, he appreciated that he had the authority “to pick every single member of the cast…I even negotiated the contracts with the actors’ agents.

Bates added that “The members of the cast all got the movie. The approach was, no matter how ridiculous anything was, they weren’t acting in a comedy; we treated everything straight for comedic effect, and everyone got that,” he revealed.

“The movie really is a comedy, and you can call it alt-comedy. What’s funny about it is that it’s very deadpan, and (the characters) treat all of the situations very seriously,” the filmmaker continued.

“When you do something like that, everyone has to be on the same page…and play it straight to earn the laughs very organically. Everyone was down with that; no one was trying to outshine the others,” Bates added.

Further speaking of the actors, the helmer delved into what the experience was like of working with them on the comedy. “I’ve worked with a lot of these actors before, but there were also some actors who I have never worked with before,” he noted. “But overall, no one did this movie to get rich; they did it for the love of making a movie. Everyone was fantastic.

“When I cast the right person, I don’t like to micro-manage them. I let them bring their own magic to their characters, so there’s a whole lot of trust,” Bates added.

Once production on ‘King Knight’ began, the filmmaker cherished having the opportunity to also work with the cast on creating their physicalities for their characters. “I worked with both the cast and the costume designer to figure out the physicality. Once we decided on the characters’ motivations, or what they represent in the film, we worked with the costume designer to figure out how they would move and look.

“But overall, I let the actors really take that part of their characters and run with it…I wanted them to bring their own special magic to their characters. At that point, I tried not to step in unless they’re doing something that I thought was wrong for the story,” Bates revealed. “But other than that, I really trust them.”

Now that ‘King Knight’ is having its world premiere today at the Fantasia International Film Festival, the director expressed his appreciation to be able to return to the festival with his latest project. “I love Fantasia so much. Every movie I’ve ever made has played at Fantasia, including my first short film (the 2008 horror short,) ‘Excision,’” which inspired his 2012 feature film writing and directorial debut of the same name.

The festival’s director, Mitch Davis, “actually wrote me to say how much he liked (rhe ‘Excision’ short). When you make a short film, you can drive across the country to see it at a festival, and there may only be five people in the audience, and then you just keep going,” Bates noted.

“But when someone like Mitch tells you that you’re not have bad at this, it really does motivate you. So I have an extreme amount of love for Fantasia; it’s the most fun festival in the universe, as far as I’m concerned. It’s always an honor, and frankly, a joy, to be there,” the filmmaker concluded.

Writer-director-producer of the comedy, ‘King Knight’