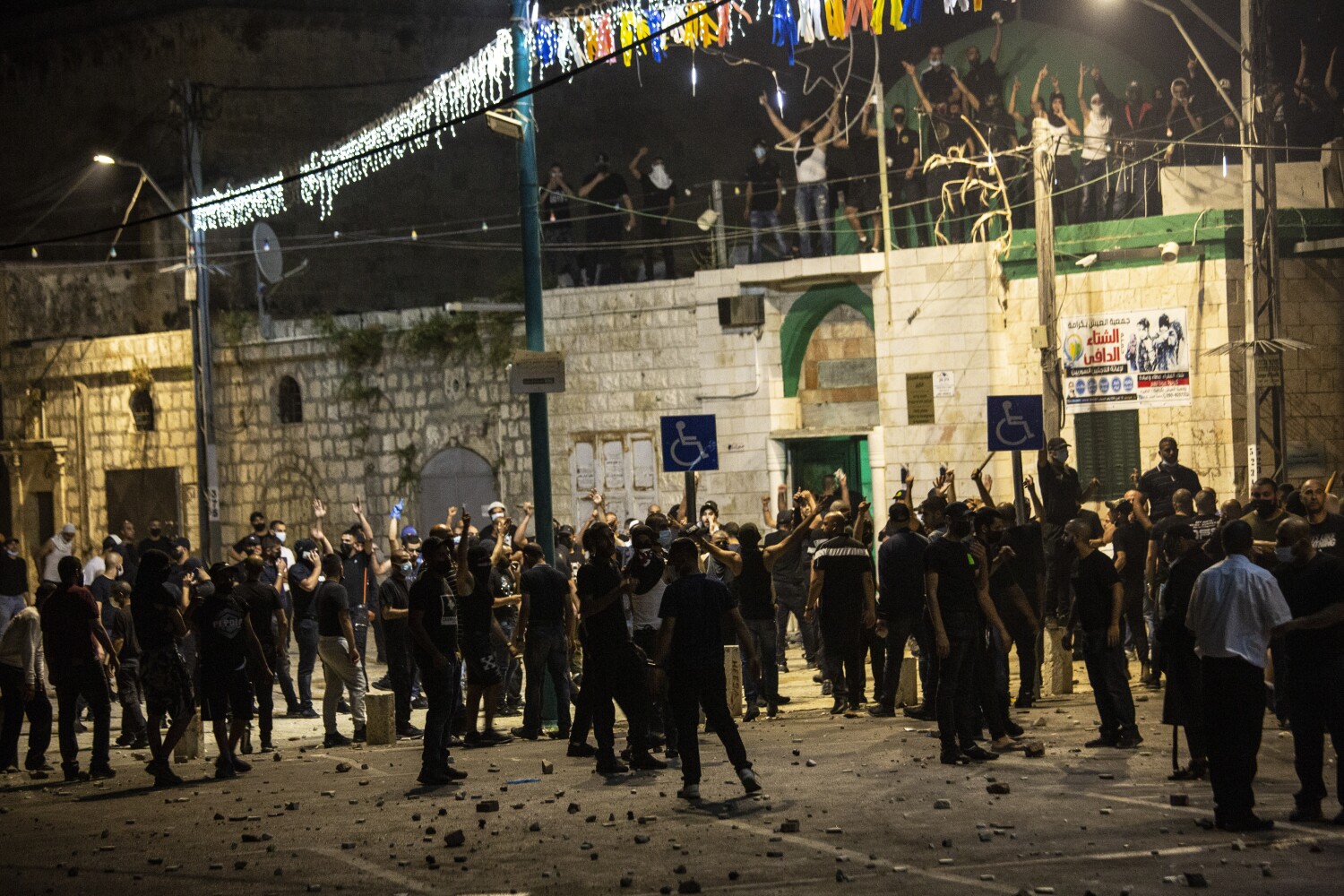 In the ancient port city of Jaffa, where Jewish and Palestinian citizens of Israel live side by side, the ritual has taken on an ugly familiarity.

Smoke rises from smoldering trash bins as young Arab men face off against Israeli police — and later on, police stand by as young Jewish men in skullcaps hurl stones toward Palestinian youths or Arab storefronts.

Israel is in the grip of its worst communal violence in decades — an eruption of ethnic strife that has rattled cities and towns from the Negev desert to the biblical hills of the Galilee.

Nightly street battles this week in several communities where Jewish and Arab populations jostle against each other have resulted in hundreds of arrests, yielded viral videos of shocking vigilante-style attacks and left behind a landscape of torched cars and shattered glass.

To a watching world, this bout of conflict within Israel’s borders has been largely overshadowed by fierce fighting that broke out Monday between Israel and Hamas militants in the Gaza Strip, the most intense such confrontation in seven years.

Palestinian militants have fired hundreds of rockets at Israeli communities, including its largest cities; Israeli bombardment has leveled parts of the coastal enclave, killing scores of Palestinian civilians along with the militants Israel says it is targeting. On Friday, thousands of Palestinians fled northern Gaza as Israel hammered away at a militant-dug tunnel network.

Although the Gaza battle has garnered far more international attention, many observers and analysts say ongoing strife between Arabs and Jews poses a graver long-term threat to Israel’s survival, driving a corrosive new wedge between the country’s Jewish majority and the Palestinians who make up about one-fifth of the country’s citizenry of 9 million.

“We are watching the disintegration, the cracking of the mutual agreement of our society,” commentator Nadav Eyal wrote in Thursday’s Yediot Aharonot newspaper.

Some view the upheaval as a part of a social stirring in some ways comparable to the Black Lives Matter movement and last year’s George Floyd protests in the United States.

Israel’s Palestinian citizens have for decades been subject to systemic discrimination in jobs, schools, housing and land allocation. They have long complained of unequal policing and anti-Arab hate speech among right-wing Israeli politicians.

“I don’t see it dying down,” Maha Nassar, a historian of the Arab world who teaches at the University of Arizona and has written a book about Palestinian citizens of Israel, said of the unrest.

Weeks of protests in Jerusalem — and a harsh clampdown by Israeli authorities that culminated in a police raid on a revered mosque in the contested Old City — set the stage for the current confrontations, with the mounting Palestinian civilian death toll in Gaza adding fuel to the fire. Violence has also spread to the occupied West Bank, where at least 10 Palestinians have been killed in recent days.

In Jaffa, just south of Tel Aviv, Mahmoud Abu Ramadan, a bodega owner in his 30s, said that although recent events were a catalyst, the anger felt by Palestinian citizens revolves around “feeling not just like second-class citizens, but fourth-class citizens.”

“It’s been a cycle for years — we are frustrated,” he said. “We want peace and quiet, but we also want equality.”

His brother, listening nearby, stood up to show a blue-gray welt on his leg — the result, he said, of a rubber-tipped bullet that police fired the night before.

Prime Minister Benjamin Netanyahu, who has presided over a sharp rightward turn in Israeli politics in recent years, has appealed for calm, but members of his government have focused on episodes of anti-Jewish violence, often using the historically weighted term “pogrom”— organized massacres of Jews in Russia and eastern Europe.

In a speech carried on national television Thursday night, Netanyahu said the Israeli cities where Jewish-Arab unrest has occurred make up a “second front,” in addition to the Gaza fighting. The prime minister visited Lod, a central city that this week has seen riots and reprisal mob attacks, and has threatened to bring in army troops to restore calm.

Friday brought a sharp warning from the head of Israel’s Shin Bet domestic intelligence service, Nadav Argaman, who said ethnic violence, either by Arabs or by Jews, would not be tolerated. The authorities, he said, “will not allow violent lawbreakers to carry out terrorism on the streets of Israel.”

In one of the week’s most graphic and disturbing episodes, a group of Jewish men and youths in Bat Yam, a suburb of Tel Aviv, on Wednesday dragged a man they believed to be Arab out of a vehicle and beat him viciously even as he lay helpless on the pavement. Elsewhere, Jewish-owned businesses and synagogues came under attack.

Political analyst Dahlia Scheindlin said the communal strife was in some ways a natural outgrowth of far-right groups having gained greater political clout in recent years, openly embracing Jewish supremacy and bringing incendiary rhetoric into the mainstream. She called it “homegrown poison.”

For some, the surge of violence is testing an ideal of co-existence, however flawed, among Arabs and Jews.

“These people are citizens — they are part of our country,” said Shai Guetta, a 35-year-old Jewish Israeli who works in information management and teaches yoga. But he acknowledged that tensions in his mixed Jaffa neighborhood left him feeling on edge.

Some observers, however, said that Palestinian citizens’ hallmarks of assimilation — speaking Hebrew, having voting rights, gaining a growing foothold in the middle class, becoming prominent in professions such as medicine and academia — cannot assuage fundamental inequalities stemming from Israel’s creation as a state.

The idea of co-existence “is one of those fictions that conceal the actual dynamics and realities on the ground,” said Nimer Sultany, an author who teaches law at the University of London’s School of Oriental and African Studies. He comes from the small Arab town of Tira, close to the West Bank and the Jewish community of Kfar Saba.

“Co-existence implies some kind of equal, free, reciprocal respect,” he said. “That kind of existence is not what we’re talking about here.”

In the 1948 war surrounding the advent of statehood, some 700,000 Palestinians fled or were driven from their homes, and those who are citizens now are the descendants of those who managed to stay or slip back into what had become Israel. Their communities were subject to martial law until 1966.

The 73rd anniversary of that displacement, marked annually on May 15 by Palestinians, falls on Saturday.

Still, some Israelis this week saw an ideal of togetherness worth striving for. Thursday and Friday were marked by Jewish-Arab solidarity gatherings across the country, some of them small, but some drawing larger crowds.

Mohammad Darawshe, a director of Givat Haviva, an organization that tries to bridge divisions between Jewish and Arab communities, was horrified by what he called “savage” behavior on display this week by those “unable to accept their fellow citizens as human beings.”

But he also saw glimmers of hope, recounting the story of a Jewish man in the Arab town of Tamara who was attacked by some Arab citizens of Israel, but other Palestinians defended him, gave him first aid and helped get him to the hospital.

“I count on that part,” he said. “I’m counting on people who will take responsibility.”

Evan Fallenberg, the Jewish owner of a boutique hotel and writing retreat in the northern city of Acre that was torched by a mob, wrote on Facebook that he sat shiva, the Jewish ritual of mourning, in the ruins — with Arab neighbors visiting nonstop to offer condolences.

“It is not yet clear whether the people in this sad, beautiful, ravaged land can ever learn to respect the differences and distinctions between us,” he wrote. “Only this I know for certain: the friendships I have made in Acre are real and unassailable…. From this, I will build a future.”