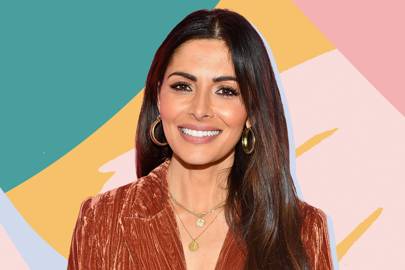 What doesn’t Sarah Shahi do on screen? As Billie in Netflix megahit Sex/Life, one minute she’s doing the wheelbarrow, the next she is tending to her children and in the process is giving us a well-rounded stereotype defying female character we have long needed.

If you haven’t watched Sex/Life yet then you are in for an eye-opening ride, as it follows stay-at-home wife and suburban mother, Billie, who finds herself lusting after the life she used to have as a care-free New York gal. After discovering her journals from her work-hard-play-even-harder heydays, Billie finds herself wondering whether to start a sexual revolution in her marriage with Cooper (Mike Vogel) or track down the bad boy who broke her heart, Brad, played by her real-life partner, Adam Demos.

This isn’t the first time you may have seen Sarah on our screens after roles in the likes of The L Word and Person of Interest but this is a cultural shift of a show, which puts female pleasure in the starring role and catapults Sarah into the spotlight at 41 years old. And we love to see it!

Here Sarah opens up about finding herself, overcoming identity crisis in her own life, finding love both on and off screen and refusing to adhere to outdated stereotypes…

WATCH: Sarah Shahi on finding love and empowerment in Sex/Life

Do you think the success of, and the conversations that Sex/Life have started, shows that sex is still such a taboo subject in our society?

The success of the show and why people have really gravitated towards it, is because it takes a real raw look at sexuality. We’re making a show about this woman who is in the midst of an identity crisis. She’s a fantastic mother and she’s got a great life, but there’s something missing. There’s something that’s just not enough and I think it’s a common thing that a lot of people can relate to. Women like oral and women like to be fondled, and this is what it is. This is what we expect of our partners, this is what we want.

I’ve definitely been knocked down a few times by things and it just really makes you wonder about who you are and what you want to put out into the world. Especially as women, I feel like we have these stereotypes that are put on us. By a certain age, we’ve got to get married, we have to have kids, and once that happens, you have to dress a certain way and you have to act a certain way. You’re not supposed to want sex the way you used to have it. It’s supposed to be this much more tame version of your life that you’re supposed to enter, but those things don’t go away and those things still shape who we are. For me, I couldn’t ignore it anymore. I just wanted something so much more than what was in front of me.

So, turns out Netflix’s Sex/Life really is based on a true story (yes, that diary exists IRL)…

There was a big freedom that happened when I turned 40. I was just like, ‘here I am, the good, the bad, the ugly, the insecure. I’m not going to make apologies for it and I’m going to put it out there.’ I wouldn’t trade that moment for any part of my 30s, any part of my 20s; it’s a privilege to grow older and it’s a privilege to carry wisdom with you. One of the things I’ve always said is, ‘I don’t claim to know much, but I do know more than I did last year.’ One of the things that Billie, the character I play, does so boldly is she constantly is questioning, ‘where did that other girl go?’ Because she still feels it, she feels it so much. It’s a very natural cycle I think that couples in relationships and long-term relationships get to if they become compliant and they ignore each other, it’s like other priorities take over. You can be a wife, a mum and still want to be a sexual goddess.

You have to find out what [feminism] means for you; not what society tells you a feminist is. What is a feminist for you?

Through life, we have people that influence us and they tell us their opinions or they judge us or, ‘You should be happy, you’ve got everything you want. You have a providing husband or you have a providing wife or you have the white picket fence,’ But Billie is so brave. She really encouraged me to live my life boldly, to the fullest because she’s saying ‘I have it, but I’m missing something.’ It’s against what her friends think, it’s against what society is telling her to do, but she cannot ignore her soul. She cannot ignore that flame inside.

Sex/Life speaks of the sexism women are still experiencing in society – and also internalised sexism – how has sexism affected you?

I’ve had sexist remarks being made to me by various showrunners in my past but I don’t consider myself a victim by any means. I think we have a choice, we have a choice in how we can respond to things. There are so many different ways to be a feminist and a feminist can have lots of different meanings, actually. It can be so big or so trivial to some people, depending on their own personal definitions of it. You have to find out what that means for you; not what society tells you a feminist is. What is a feminist for you?

The show has created such a conversation piece amongst people. I feel privileged to be a part of something that is sparking lots of different thoughts, and one of the thoughts is ‘Billie is setting women’s lib back by so many years.’ I thought about that and I was like, ‘Is she?’ And I go, ‘But I kind of view it a little differently. I view this as somebody who is bold enough to say, I’m not happy and I want more, and she’s going after it.’ It doesn’t have to do with either Brad or Cooper. In my opinion, it’s about her. There’s all this Team Brad, Team Cooper, for me it’s like, ‘guys you are missing the point, it’s team Billie!’

One of the things that the show does so clearly, is it sits there and it says, ‘we’re women and we have these wants, these needs, and we should go after them unabashedly.’ Men are constantly being allowed to, especially in film and television, to have sex the way they want to have sex, and the women just need to comply. But this is a show that really sort of takes that model and puts it on its head.

Sex/Life on Netflix makes 50 Shades look vanilla as hell – no wonder everyone is obsessed. Here’s what we know about season 2 of this raunch fest

How did filming Sex/Life empower the relationship you have with your body image?

It was scary for me to have to do all those (sex) scenes – I have three kids. I was super strict about what I was going to eat, and I would look at the call sheet and figure out when I had to be nude, and then I would literally try to eat very little the few days leading up to it. There was a lot of pressure to look a certain way, not one that was placed on me by Stacy or by anybody else or Netflix. It was just you’ve got the proverbial gun to your head, and you want to look great and feel great and feel confident.

The Brad scenes were mostly all in flashback. So, we had to shoot me in a way that was very complimentary and with the Cooper scenes, I really just wanted to be me. There are scenes where you can see my stomach doesn’t look 100%, it doesn’t look great, and I’m proud of it.

I never quite realised the power of my body until I had children, until I breastfed all my children. Now, I’m proud. I’m supremely proud of every stretch mark or curve or bump or whatever it is; I earned those. I really do live by the whole 40 is the new 20, because I was so insecure about the way I looked when I was in my twenties.

It is so clear that Sex/Life has empowered you in new way – did that new confidence help you build your relationship with your co-star Adam Demos?

Everything that I’ve learned, the culmination of my ups, my downs and mistakes has definitely impacted my relationship with Adam. We’re both very sort of tight-lipped in terms of what we want to say about each other because as much as we are tickled by the idea that people are interested in us, there’s a lot that we want to say for ourselves. But we were both ready for each other when we found each other. I’m very proud to be his partner. I’m proud to be seen next to him on screen and off.

If you loved Sex/Life, these are all the dramatic, steamy shows to binge-watch next (that aren’t Fifty Shades of Grey)

There are days where I need more attention and there are days where I don’t, but to not hide. I don’t believe that anybody should have to hide any parts of themselves when they’re with the person they’re supposed to be with, and this is not to knock partners people have previously. I believe everyone serves a purpose. I believe everyone helps form you on your journey. But I really do think at the end of the day you need to find someone who honors you for you.

Now, I’m proud. I’m supremely proud of every stretch mark or curve or bump or whatever it is; I earned those

Sex/Life is a wild show, looking back when was the moment when you thought, what is going on?

It was a wild show to shoot because of the number of sex scenes that I had to do, and especially in the first couple of episodes where I had those sex montages and I’m upside down, I’m in a wheelbarrow, I’m doing a handstand, and I’m naked while I’m doing it. It was a wild ride!

One of the biggest memories I have of this show is doing a scene with Cooper, with Mike Vogel, and we had to do a scene where it took place on one of the coldest recorded temperatures of Toronto. It was a nighttime scene where we ended up going skinny dipping in a pool, and we had to get nude. We had to take off our clothes outside of the pool. We were supposed to slowly undress. The pool heater broke and they didn’t want to have steam coming up. I was just freezing. It was just the hardest thing ever to go skinny dipping in the middle of the night in a freezing pool. That will forever go down as one of the most challenging experiences of my life. It’s not necessarily a funny moment, but holy sh*t, did it make an impact on me.

I mean, a lot of things shrivel in that situation too…

A lot of things shrivel in that situation! It’s not very glamorous when you talk about it from that perspective, but the scene turned out to be beautiful!

Sex/Life season one is streaming on Netflix now.