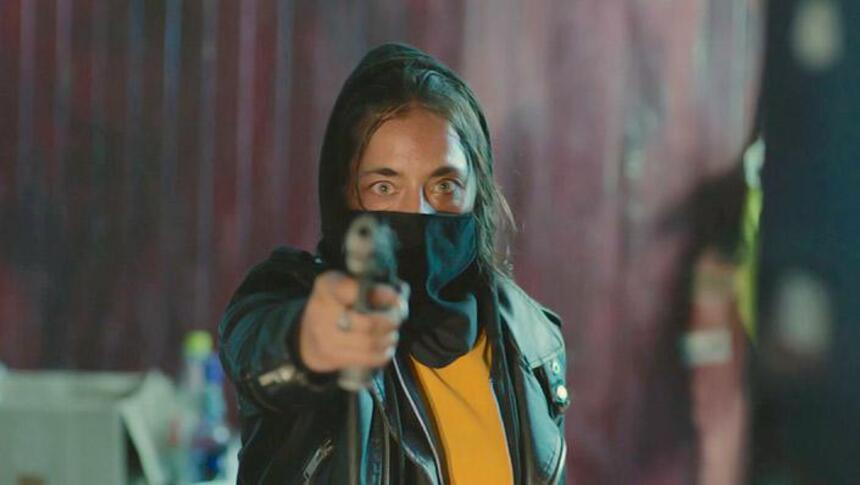 Sisters Ana and Flavia reunite to gather their mother’s remains. The eldest sister Flavia still harbors a lot of anger and hate about her death. She is determined to prove that it was their father who killed their mom so she begins to look for him. The younger sister Ana has moved on. She has a boyfriend, goes to school and spins at clubs to make ends meet. Above all though she is loyal to her sister and won’t let Flavia go about the search for their father alone. When they find him they uncover the truth about their mother’s death.

Flavia is played by Sara Hebe, a relative newcomer to acting in film, but has been spitting fire as a hip hop artist and femcee for a while now. She is the embodiment of zero fucks to give, brandishing a baton when needed, and decked out in a bomber jacket and motorcycle boots. She can get a stranglehold on you simply with a steely glance of her eyes. Already a figurehead for the feminist movement in Argentina she’s not meant to be glamorous or perfect, instead she is something relatable. She’s every woman who has had enough of your crap and has tipped over the edge. There is no mistaking at the beginning of this film that Flavia is the driving force of Expansivas.

Ana is different, on the opposite side of the spectrum even. Visually she is set apart from her sister with pink dyed hair, brightly colored jackets and clothes. Perhaps she represents naivete or innocence affected by the issues. After so long since their mother’s death she lives a relatively normal young adult woman’s life. As stated above she’s going to school. She aspires to make music and spins at local clubs to pay the bills. Her boyfriend works at the hospital with their aunt. Despite any naivete we presume she has Ana is still willing to go the distance with her sister.

Director Ramiro Garcia Bogliano uses Expansivas to tell a small thread of a much larger story, tackling themes of femicide, violence against women, and the culpability of authority figures. This is the same story of the lives of women in Argentina, Latin America, the world all over, minus the revenge part. It’s a challenge to remain objective about Expansivas when you know the bigger picture behind the story. I’m friends with two of the producers and I talk with one of them about these issues, too often. She is my conduit to these kinds of social issues in Argentina. These are themes that have been the foundation of their own films as well. So I understand their involvement in this project.

Instead of being overblown and flashy like a Hollywood counterpart, Expansivas is a very singular and stripped down thriller. The focus is just on the sisters and their purpose. The story doesn’t get lost in big set pieces or showcases of action prowess. There is no gloss or sheen to it. For example staking out their father is a mundane task. What it does do in those moments is give the sisters time to strengthen their relationship after being apart for so long. The subject material is too important to gloss over with high speed chases and close quarter well choreographed brew-ha-has.

Expansivas‘ simplicity is deceptive though. Instead of giving viewers heroines on the level of a Charlize Theron in Fury Road or Atomic Blonde, Flavia and Ana are simple and common heroines. They are someone that the women in Argentina, Latin America, the world all over, can relate to and find their own strength in because Expansivas is a thriller that takes its message and delivers it at the ground level. It is not so much empowering as it could be emboldening.

Any good thriller comes with twists and turns, events that up the ante. In fact, finding their father is rather uneventful. As the sisters get closer to him they will learn the truth behind their mother’s murder. We won’t say any more about that. These are conventions of the genre but why ruin it? It is enough to keep things interesting in this stripped down version of a revenge thriller.

Expansivas was not what I expected but not surprised by knowing some of the folks behind its production. As a revenge thriller it has all of its conventions and pieces in the proper order. As a message it speaks to two groups differently.