Skip to Content
Home Movies Structurally similar to Hollywood films but refreshingly different in presenting a realistic canvas of Brazilian characters and contemporary problems of that wonderful, diverse country 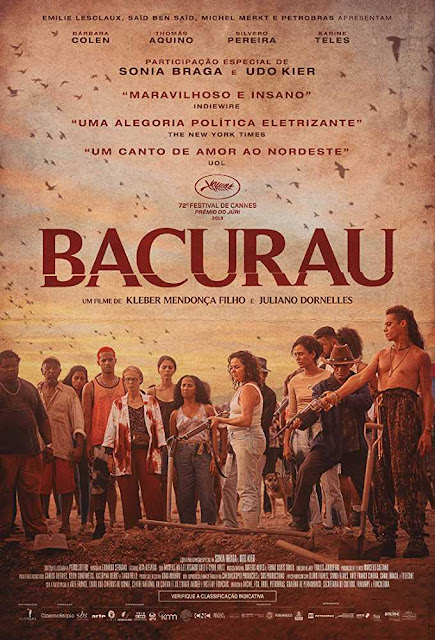 Is Bacurau a film
that offers much more than that? The Cannes film festival jury thought it was
the second best film in competition, sharing the honour with Les Miserables (2019), a film that had
little to do with Victor Hugo. Was Bacurau
less impressive than the Korean film Parasite,
a film that won the top honour at the Cannes festival in the same category,
which also had a similar orgy of violence at its end? Debatable, indeed,
because Parasite deals with economic
disparity in urban life while Bacurau deals
with much more: economics, politics, sociology, ecology, and even human hunting
as a depraved sport for the rich.

While Parasite is
a clever reworking of Michael Haneke’s two film versions of Funny Games (1997, 2007) and Claude
Chabrol’s  La ceremonie (1995), Bacurau
presents a deeper sociological and economic canvas that is arguably more
realistic and fascinating than the slick and glib Korean film, despite Bacurau’s ridiculous drone without
helicopter blades or other conventional propulsion aids to make it fly.  The desolate town of Bacurau in Bacurau does not exist in reality. Yet Bacurau presents a very
realistic future scenario where the rich and powerful can remove entire towns
and villages from satellite images that can be accessed on the internet for a
short time without the rest of the world noticing the difference.

Why did  the
screenplay-writers call this fictional place Bacurau, which one learns is the Portuguese
name of a bird—the night jar—found in southeast Brazil?  The nightjar is unique because of two rare
factors—it can easily go into torpor, with reduced body temperature and
metabolic rate, enabling it to survive periods of low food availability and it
can naturally camouflage itself with tree branches and leaves for
survival.  The allegory of the bird and
the simple world of the fictional Bacurau’s population will be more apparent to
those who have visited Brazil. In the film Bacurau,
the town’s population battle the manmade decrease in water availability—in a
country where some parts are blessed with the abundance of water from the mighty Amazon River.

Bacurau begins with visuals of a modest water truck that navigates ill maintained
roads to a town that survives with a church, a school, a museum (where it records
past denizens who revolted against injustice) , a whorehouse, a small hospital,
a farm with horses and a diverse population that represents the varied races of
human beings all living in harmony–a microcosm of Brazilian social reality
today. Is the ecology sustainable without adequate drinking water? Can a remote
town survive without adequate supply of food and medicines?

The Brazilian co-directors (Filho had made the acclaimed
recent film Aquarius with actress
Sonia Braga, who also has a significant role in Bacurau) underscore the bias of Brazilian politicians who neglect fringe
populations living in remote areas in preference to wealthier populations living
in better endowed areas of the country to get re-elected.  They add to this scenario  the profile of the inconsiderate politicians who
supply medicines that are either banned or beyond their expiry date and dump second
hand books for the library transported in dumpsters all in the name of aid. Then
there are politicians that divert canal water, protected by armed guards, which
could have served the town of Bacurau that needed the water, to other projects
that serve the politicians’ own narrow interests. When the local politician arrives
with his gifts, the population of the town hide behind closed doors just as the
nightjar bird is prone to hide by camouflaging itself.

Into this bleak scenario, co-directors Dornelles and Filho
add another and more deadly and sinister element—the sport of rich individuals from Europe
and USA to kill human beings in Bucarau and its surrounding areas targeting  those are not white (just as hunters used to kill
wild animals) with the assent of local Brazilian politicians. Dornelles and
Filho even add rich Brazilians (referred to in the credits as “Foresteiras”)
who are in this group of bizarre, racist individuals who kill humans without
remorse.  This group is led by a character
named Michael (played by Udo Kier, who has worked with Lars von Trier in Breaking the Waves and Europa and has a cult following for his
appearances in gory,  horror films). One
would have expected actor Kier to have been stony faced at the Cannes premiere
of Bacurau but according to IMdB trivia Kier cried for the first
time in his 50 year career “because of
the whole experience of filming (Bacurau)”

There are many details in Bacurau, which will ring a chord with Brazilian audiences as there
are references to real life people in Brazilian history, people who fought
against injustice n the past.  Bacurau brings back memories of
great Brazilian filmmakers of the past who made films that are
unforgettable such as Ruy Guerra (The Guns,
1964, winner of the Silver Bear at Berlin festival) and Glauber Rocha (Entranced Earth, 1967, winner of the Grand
Prize at Locarno festival and FIPRESCI prize at Cannes festival). Bacurau might not boast of the high
production qualities of Parasite,
but it is a film that reminds you of the Brazilian films of Guerra and Rocha.

Like the nightjar, the people of Bacurau prove that can “eat”
human insects. And it offers more food for thought than a Tarantino film or a regular Western.

(The film is showcased at the 2019 Denver Film Festival, USA, opening shortly, which has a major focus on Brazilian cinema.)

P.S.  Bacurau won the Best Film and the Best Director
awards at the Lima Latin America Film Festival., the ARRI /OSRAM Award for the Best
International Film at the Munich Film Festival, and the Best Director Award, the
Carnet Cove Jury Award, and the Critics’ award  at the Sitges Catalonian International  Film Festival.  Lars  von Triers’s Breaking the Waves (with Udo Kier and mentioned in the above review) has been reviewed earlier on this blog (click on the name of the film in this postscript to access the review)  and is one of the author’s best 100 films. The author has visited Brazil and interacted
with its senior government officials who were planning and managing national agricultural
projects in the late Nineties. Bacurau is one of the author’s best 20 films of 2019.