I consider Joseph Losey to be one of the great British film directors, even though Losey was born and raised in the United States and began his film career in Hollywood in the late 1940a. 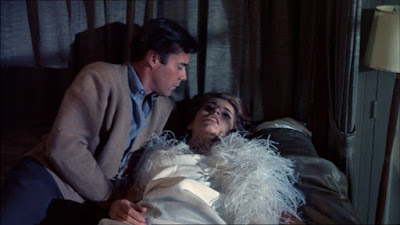 But Losey’s socialist sympathies soon came into conflict with the emerging anti-communist hysteria associated with McCarthyism in the 1950s [1], and he opted for self-exile in London in 1953, where he resumed his film career.  Losey’s subsequent films in England were what in  my view established him as a great director, particularly his collaborations with famed playwright and screenwriter Harold Pinter – The Servant (1963), Accident (1967) and The Go-Between (1971).  All of those films are emotive and fascinating psychological dramas, but of these, I think Accident is perhaps relatively misunderstood and underappreciated.  Nevertheless, Accident did receive some accolades, including the Cannes Film Festival Grand Prix (the second-most prestigious festival prize after the Palme d’Or).

The story of Accident is based on Harold Pinter’s adaptation of Nicholas Mosley’s 1965 novel of the same name, and it concerns the relationships of an Oxford don and his students.  The Oxford setting of the story is important, but its presence seems to dominate the perspectives of some critics, particularly American.  Thus many of these critics see Accident as mostly concerned with either (a) the British upper-class and associated class prejudices or (b) the peculiarities of the British intelligentsia [2,3,4,5,6].  However, while I believe those thematic elements may be present in this work, the true profundity of the film lies elsewhere.  Of the reviews of the film that I did come across, though, I thought the most insightful one was that of Jugu Abraham [2]. 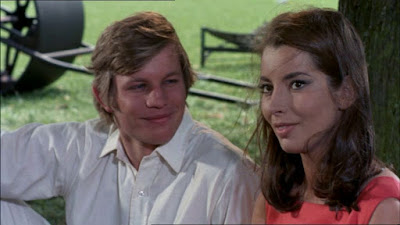 Getting back to the story, itself, the film begins with a static, frontal shot of a stately home removed from the city, after a few seconds of which, the sounds are heard of a horrific auto accident offscreen.  The home’s resident, Stephen (played by Dirk Bogarde), rushes out to the scene of the accident, which involved a single car that ran off the road into a tree.  Stephen apparently knows the two battered young occupants of the car – the driver Anna (Jacqueline Sassard), who is dazed and barely conscious, and the passenger William (Michael York), who is dead.  We will later learn that both of these people were Oxford students whom Stephen was tutoring.

Stephen manages to usher the still-dazed Anna back to his home and lie her down.  When he then reports the accident to the police, he conceals from them that Anna was in the car.  Much of the rest of the film consists of various flashbacks covering things that occurred before the accident.  And we will later learn that the opening crash sequence is also a flashback.

These flashbacks do not appear in a linear narrative fashion and have the character of out-of-order, impressionistic psychological recollections, presumably those of Stephen.  As the flashbacks unfold, we learn that Stephen is a fortyish Oxford don who is married with two kids.  His wife Rosalind (Vivien Merchant, the real-life wife of Harold Pinter) is pregnant with their expected  third child. 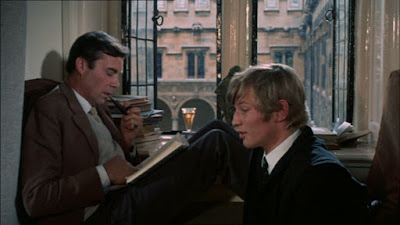 As part of the admirable Oxford tutoring system, which enables students to have regularly-scheduled tutorial sessions with the distinguished Oxford faculty members, Stephen has two tutorial philosophy students, William and Anna.  William is an exuberant member of the upper-class and a graduate of Eton who seems to have a very close friendship with Stephen.  The more taciturn Anna is a beautiful young Austrian woman who comes from a titled family.  From Stephen’s perspective, the contrast between Anna and his wife Rosalind couldn’t be more marked.  While Rosalind is a plain, down-to-earth mother and homemaker, Anna is exotically gorgeous and given to quietly giving him alluring glances.

Stephen also has an Oxonian faculty colleague and presumed friend, the similarly-aged family man Charley (Stanley Baker), with whom Stephen feels he is sometimes unfavorably compared.  While Stephen is professionally soft-spoken and modest, Charley is an outgoing, self-advertising egotist who has published some novels and who hosts his own TV talk-show.  Their contrasting natures are fully on display when they are around women.  Stephen is invariably reserved and gentlemanly, even when he is around Anna, to whom he is secretly attracted.  On the other hand, Charley 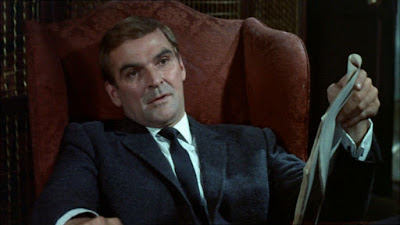 openly flirts with many women, even with Stephen’s wife, Rosalind.  In fact, as I similarly remarked about two characters in Satyajit Ray’s Kaparush (1965), if we were to be more scientific and compare Stephen and Charley psychologically in accordance with the Myers Briggs Type Indicator (MBTI) [7], Stephen would be characterized as INFP (i.e. Introverted, iNtuitive, Feeling, and Perceiving), and Charley would be characterized as the opposite, ESTJ (Extraverted, Sensing, Thinking, and Judgmental).
As the story unfolds, William, in one of his private sessions with Stephen, reveals that he is strongly attracted to Anna and wishes to pursue her.  So Stephen suppresses his own emotions for Anna and encourages them to get together.

In order to be a good guy (and also see more of Anna), Stephen invites both William and Anna to his stately home for an afternoon party.  However, on the day, Charley shows up uninvited and crudely imposes himself on the others present.  Anyway, Stephen does manage to take Anna on a private walk to a nearby orchard, but his timidity prevents him from drawing himself close to her.  Stephen subsequently then invites everyone to stay for dinner, and all the men get very drunk, so they all have to stay over at Stephen’s home for the night.  This get-together sequence is particularly interesting, because it shows all the key characters (Stephen, Anna, William, Charley, Rosalind) together and variously interacting. 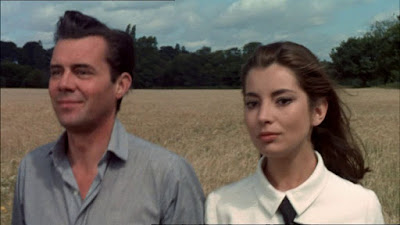 Later, with Rosalind away in connection with maternity preparations for the birth of their third child, Stephen makes a brief trip to London to see if he can arrange for his own TV appearance.  Nothing comes of that, but while  in London, Stephen looks up an old flame, Francesca (Delphine Seyrig), the Oxford Provost’s daughter.  Stephen hasn’t seen Francesca in ten years, but they still share feelings for each other, and they proceed to go to bed together.  This cameo appearance of Delphine Seyrig can be seen as something of an homage to one of Losey’s favourite directors, Alain Resnais, in two of whose famous films, Last Year at Marienbad (1961) and Muriel (1963), Seyrig had starred.

When Stephen returns to his country home, he discovers that Charley has broken in while Stephen was away so that he could have a sexual tryst with Anna.  Stephen is speechless at what has happened. This is because Anna, for Stephen, is an alluring, elegant princess who represents his romantic ideal.  How could she succumb to such a crude, loathsome creature as Charley? 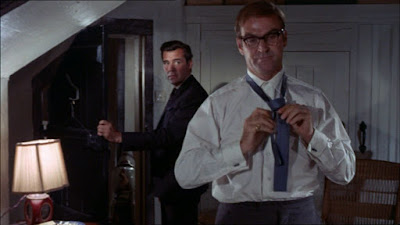 Numb with disappointment, Stephen goes off to the kitchen to make himself an omelette, followed by the embarrassed Charley and Anna.  They apologetically try to talk to Stephen, but he remains silent.  This highly charged scene of frustration and non-interaction is my favourite sequence in the film.  Stephen is later further silently horrified to learn that Charley has been sleeping with Anna for some time.
There are other flashback sequences, such as one showing Stephen visiting Charley’s estranged wife Laura (Ann Firbank), another one showing Stephen visiting William’s upper-class house for a party, where the male guests play an indoor version of the Etonian rugby-like wall game, and another sequence showing Stephen watching William and Charley playing in a cricket match.  In all these sequences Stephen seems to be a polite outsider and unable to engage with the social games that are going on.  Although these sequences are probably what inspire some critics to claim that Accident is a film about class, I would say that they are more concerned with the general theme of psychological alienation. 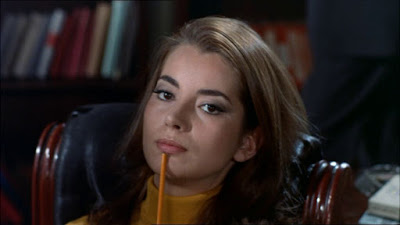 Finally, Anna rather coldly tells Stephen that, despite her clandestine sexual affair with Charley, she nevertheless intends to marry William.  This is a further disturbing thing for Stephen to learn about Anna’s previously idealized nature.

Then we come around to a flashback of the immediate events surrounding the opening crash scene.  William, excited about his engagement with Anna, tells Stephen he would like to come over to Stephen’s home for a talk after first attending a party he has to go to.  We know from earlier scenes that William tends to drink too much, and on this occasion after the party, he was too drunk to drive.  So Anna had to take the wheel, and it was she who crashed the car in the opening scene.

We now return to that crash scene, at which Stephen found William dead and Anna in a daze.  We now know that Rosalind is away tending to her newborn baby.  After attending to the still-shocked 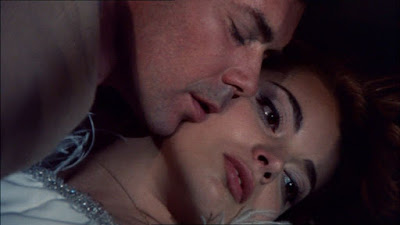 Anna in the bed, Stephen, in an apparent moment of Charley-imitation, tries to force his affections on the woman.  But Anna is unresponsive, and this is not what Stephen sought.

In the end, Anna returns to Austria, much to the frustrated consternation of Charley.  There seems to be little sorrow expressed over William’s death.  Stephen can only watch.

As I mentioned at the outset of this review, I don’t think Accident is primarily concerned with the British classes or intelligentsia, although those factors do provide a colourful social context to the tale.  What the film does portray are the often-hidden (and never-to-be-forgotten) feelings of romantic longing and guilt.  Anna was the ideal romantic dream for Stephen.  The imagery of Charley sullying this dream was deeply disturbing to Stephen, and the nuanced acting and camerawork effectively conveys this.  In fact throughout the film, Losey’s subtle and 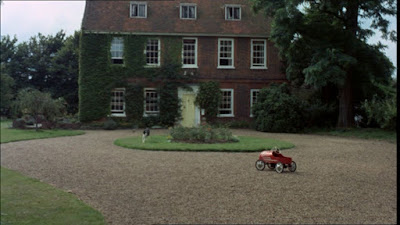 affective mise-en-scene immerses the viewer in Stephen’s emotional roller-coaster ride.  And this is what makes Accident a great film.

The final shot of the film again shows a frontal shot of Stephen’s country home.  Things appear to have returned to normal.  But the soundtrack reminds the viewer that the fatal accident will always be a part of Stephen’s memory.
★★★★