The 1975 film Farewell, My Lovely stands today as a classic film noir, even though it was made a number of years after the period (1940s and 1950s) in which the bulk of the films we 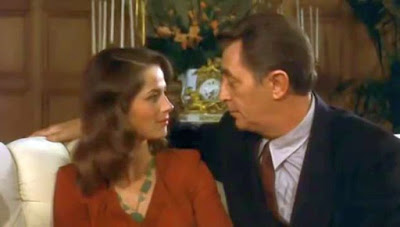 associate with that genre were made.  For that reason, this version of Farewell, My Lovely is sometimes labelled a “neo-noir” film.  But in contrast with other, contemporaneous neo-noir films, like The Long Goodbye (1973) [1], which tended to feature updated perspectives and stylistics, the 1975 Farewell, My Lovely very much stuck with the traditional film noir style and themes.  These themes, as I have outlined elsewhere [2,3], consistently revolve around fatalism (most characters feel trapped in a dark world stacked against them), elusive truth (everyone dissembles and lies), and loyalty (because the main characters are solo operators, they always search for someone they can trust).

One aspect of Farewell, My Lovely, in particular, that helps lock it into the film noir genre is that it is based on a detective novel by Raymond Chandler, many of whose works (e.g. The Big Sleep (1939), Farewell, My Lovely (1940), The Lady in the Lake (1943),  and The Long Goodbye (1953)) served as the narrative bases for atmospheric films noir.  Chandler’s original Farewell, My Lovely (1940) was particularly famous, and it was adapted three times for major motion pictures – The Falcon Takes Over (1942), Murder, My Sweet, (1944), and the present film under discussion, Farewell, My Lovely (1975).  The protagonist in all these hard-boiled Chandler stories is the same – tough, chain-smoking private eye Philip Marlowe, and there is something of a mystique surrounding this cynical, but reflective, character.  This attracted major Hollywood stars to play this character, for example Humphrey Bogart for The Big Sleep (1946).  Here in Farewell, My Lovely it was Robert Mitchum, who, despite his age (57), gave an iconic performance of Marlowe.

One aspect of Chandler’s Marlowe stories, though, that, despite their popularity, makes them difficult to adapt for film is their tortuous and sometimes contradictory plots; and Farewell, My Lovely was no exception.  So film screenwriters adapting these stories often make changes to them in order to move things along more smoothly for a two-hour film.  In consequence, I am told, a number of film 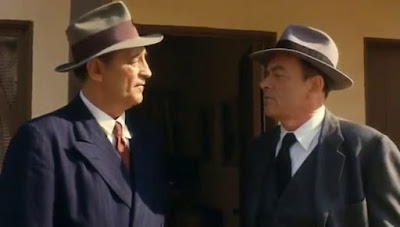 critics and Chandler fans have objected to these changes and have dwelt on them in their reviews.  They also complain that the 57-year-old Mitchum was too old to play Marlowe.  Not having read the original Chandler stories, though, I am not one to object to such changes, and I accept critic Roger Ebert’s assurance that the script changes in Farewell, My Lovely were minor and acceptable [4].  And anyway, even as it stands, the story of the film is still convoluted,  and any simplifications that were made were probably needed.

In any case, what helps make Farewell, My Lovely a compelling work is the expressionistic noirish atmosphere that pervades the film throughout.  Despite the fact that film director Dick Richards did not apparently have much experience with film noir stylistics, he and his team for this film combined to put together a classic that has been well received over the years [5,6,7,8,9].  In particular the cinematography by John A. Alonzo, featuring relentless moody low-angle imagery, as well as  the film editing by Joel Cox and Walter Thompson are perfectly attuned.  Even though it’s all presented in color, the visual style matches closely with the film-noir aesthetics of the 1940s.  And the 1940-style big-band music by David Shire is also evocative of the 1940s setting.

The story of Farewell, My Lovely is set in 1941 Los Angeles and told mostly as an extended flashback.  Because of the flashback format, the viewer is treated all the way along to the reflective and cynically philosophical commentary from the novel by the principle character, private detective Philip Marlowe.  But it is a vicious tale.  Over the course of this story, there will be seven major characters murdered, as well as numerous gun-wielding henchmen killed in shootouts. 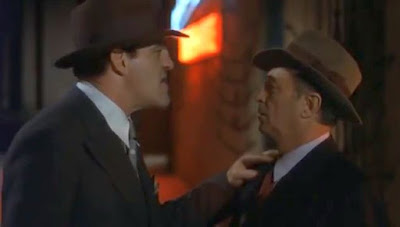 At the outset, detective Marlowe (played by Robert Mitchum) is hired by ex-prizefighter and convicted bank robber Moose Malloy (Jack O’Halloran) to find his old girlfriend Velma, whom he has not seen in the past seven years that he has been in prison.  Marlowe and Malloy go to a nightclub where Velma used to work, and the thuggish Malloy kills the nightclub owner while cross-examining him, after which Malloy goes into hiding.  Meanwhile Marlowe separately connects with two old friends of Velma,  Tommy Ray (Walter McGinn) and Jessie Florian (colorfully played by Sylvia Miles).  Both of them promise to help, but both of them turn out to be liars, and both of them will be eventually murdered.

Then out of the blue, a somewhat bizarre man named Marriott (John O’Leary) hires Marlowe to help him pay a ransom in order to recover some stolen precious jade jewellery.  At the payoff point, though, Marlowe is knocked out and Marriott is found murdered.  At this point there doesn’t seem to be anything connecting this operation and the Malloy-Velma concern.

Marlowe decides to find out what lies behind Marriott’s murder, and his investigations lead him to a wealthy judge, Baxter Grayle (Jim Thompson), who is famous for his large jade jewellery  collection.  When Marlowe visits the elderly Judge Grayle, he is introduced to his much younger and glamorous wife Helen (Charlotte Rampling), who tells Marlowe that she knew Marriott and that she wants him to investigate his murder (which he is already doing). 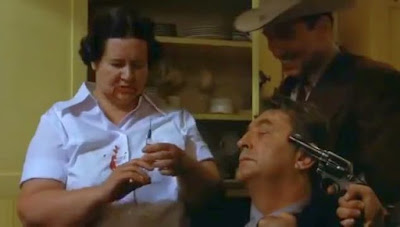 Afterwards and just to make things more confusing, a seemingly diversionary segment shows Marlowe being drugged and abducted to a whorehouse run by a notorious madam, Kate Murtagh (Frances Amthor).  There Marlowe discovers two things – (1) the dead body of Tommy Ray and (2) that Amthor seems to be familiar with Moose Malloy.  A confusing melee unrelated to Marlowe then develops which leads to Amthor’s death and enables Marlowe to make his escape from the premises.

Later Helen Grayle telephones Marlowe and tells him she wants to meet him at an upcoming party.  At the swanky party Marlowe sees Helen and is also introduced to gangster Laird Brunette (Anthony Zerbe), who hires Marlowe to arrange a meeting with Malloy.  So now the Malloy and Marriott threads are starting to link up.

Later Marlowe talks to Jessie Florian again, and she tells him that she has been in touch with Velma and that Velma wants to secretly meet up with Malloy.  Marlowe hooks up again with Malloy, and through clandestine telephone communications via Jessie Florian, Malloy and Velma arrange to meet at an obscure motel. 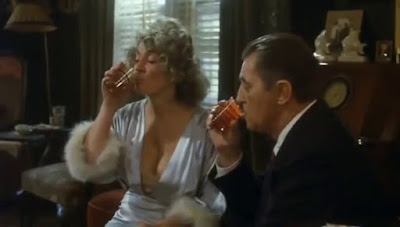 But when Marlowe and Malloy go to the secret rendezvous point, they are ambushed by two gunmen.  Marlowe manages to shoot and kill the two gunmen, and he and Malloy escape.  So evidently the meeting was a setup for murder.  But who is behind this?  Are Jessie and Velma part of this, or are they just a pawns?

After Jessie Florian is found murdered, Marlowe concludes that Jessie must haves just been used by some other malefactor to carry out some dirty deed, and he thinks gangster Brunette must be involved.  So Marlowe and Malloy arrange to sneak onto Brunette’s gambling yacht and see what they can find out.  When they confront Brunette, Helen Grayle surprisingly shows up, and Moose Malloy gets a look at her for the first time.  He recognizes the woman as his long lost Velma, whom he hasn’t seen for seven years.  This is the big, shocking revelation of the film – Helen and Velma are the same person!  It then becomes apparent that she had married Baxter Grayle without the judge knowing about her background of prostitution in Amthor’s brothel.

Thus it seems that Velma had been arranging, via Brunette’s thugs, for the deaths of anyone who might reveal her salacious past.  But Moose Malloy is still madly in love with Velma and still ready to do anything she tells him to do.  She tells him not to listen to Marlowe’s accusations and to kill him instead.  A double-crossing gunfire exchange breaks out, and it winds up with Velma shooting and killing Moose, followed by Marlowe, in self defence, shooting and killing Velma.  Then the police, who had been trailing Marlowe and Malloy, arrive on the yacht and take control, and Brunette is presumably arrested. 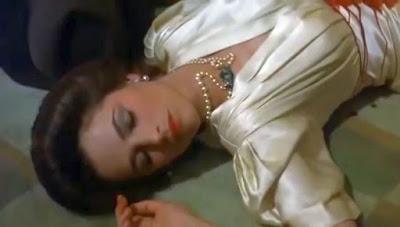 So in this grim tale, are their any sympathetic characters presented besides Marlowe?  Most of those who are bumped off are colorfully eccentric, but they are deceitful and self-obsessed and so not sympathetic characters.  This reduces their interest to the viewer.  The person most likely to be considered a protagonist is the brutish Moose Malloy, who is madly in love with Velma, come what may.  But Moose is so rough he can kill people without thinking.  No, it’s not the existence of sympathetic characters that colors this canvas, but rather the entire nightmarish (and noirish) psychological landscape that Marlowe finds himself in.  This feeling of being hopelessly immersed in a bleak, dispiriting world of losers is something that Marlowe seems to share with his law-enforcement counterpart, Lt. Nulty (John Ireland), and in this respect Nulty and Marlowe seem to share a guarded respect for each other.

In this context it is worth mentioning the rather dismissive general attitude towards colored (i.e. black) people and colored neighbourhoods in the film.  This is not a major theme in the story, but most of the white people seem to dismiss colored people as just belonging to a lower sector of humanity, perhaps a much more common attitude in 1941 America than today.  So it is telling that at the very end of the film, Marlowe, depressed that despite his efforts he has been unable to stop the murderous mayhem, decides to try one last act of benevolence in this arena.  He takes the $2,000 that the gangster Brunette had earlier given him to help track down Moose Malloy and goes to the home of the deceased Tommy Ray, a white man married to a black woman, and gives the money to their mulatto young son.  Maybe that will help the boy, who will be facing a prejudicial society, find a good path in the future. 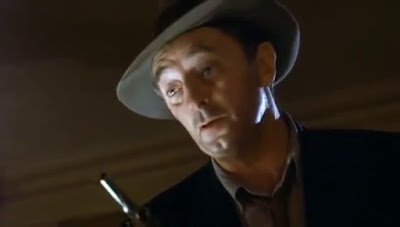 So returning to the issue of the film’s interesting character, it is Marlowe, himself.  The film is carried by Robert Mitchum’s reflective, world-weary demeanor.  Despite his age, Mitchum is perfect for this role.  He portrays a man who is not idealistic but is trying to contribute (for his small fee) a little order to a disordered world.  His dramatic persona is what makes Farewell, My Lovely a compelling watch.