In an imagined pantheon of classic horror films, Freaks (1932) would certainly deserve a hallowed position.  And yet when the film was first released in 1932, it was widely criticized and 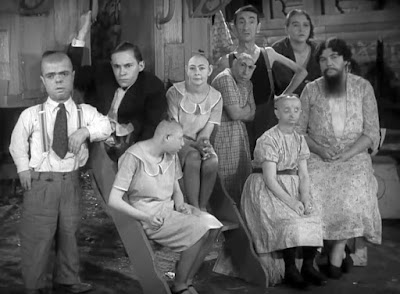 had a limited distribution, making it a financial disaster [1].  Many of the early viewers in those days seem to have been put off by what was perceived as the exploitative subject matter of the film, which concerns deformed people who are exhibited as freaks as part of a traveling circus.  And even today, some viewers dismiss the film Freaks as merely a cheap exploitation exhibition showing those unfortunate people who are seriously deformed by birth defects, as was indeed the practice of traveling circus freak shows of an earlier era [2].

The producers, however, had harbored high hopes for the success of this film.  The director of Freaks was veteran Tod Browning [3], whose previous outing, Dracula (1931),  starring Bela Lugosi, had been a huge box-office hit and is also considered to be a classic horror film.  Browning had been interested in crafting a more personal work, and he had urged his producers in the mid-1920s to secure the rights to Tod Robbins’s story “Spurs” (1923) for this purpose.  Eventually a script was developed by Willis Goldbeck and Leon Gordon that was loosely based on Robbins’s story, and veteran Merritt B. Gerstad was secured for the cinematography.  When a 90-minute film was completed in early 1932, routine test screenings were conducted.  However, these screenings proved to be so disastrous that about one-third of the original-cut material was removed from the film, and today all we have left of the film is the 64-minute version that was given a limited commercial release [9].

Although the film proved to be a financial disaster at the time, nevertheless, more recent viewers have generally been much more sympathetic towards the film – and they have regarded the “freaks” in this film as having been presented in a humane way [3,4,5,6,7,8].  Indeed in this story, the “freaks” are the real protagonists with whom the viewers will empathize.  In fact I would agree with Andrew Sarris’s comment on this score that

“‘Freaks’ may be one of the most compassionate movies ever made.” [10]

The story of Freaks plays out over roughly three phases.  The first one introduces to the viewer the many and various figures in this tale.  The second phase covers events surrounding the memorable wedding banquet that then takes place.  And the final phase shows the dramatic consequences that ensue.

1.  A Traveling Circus and Its Performers 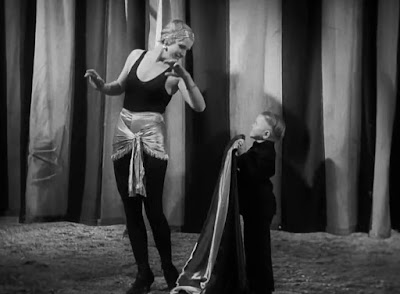 The opening scene shows a carnival barker summoning customers to see his freak on display.  Although the film viewer cannot see this freak, the onlookers shown in the film are clearly horrified at what they see.  We are only given the suggestion that this apparently horribly deformed figure was once a beautiful woman.  The ensuing one-hour of film is then apparently a flashback narrative covering background material on this story.

The scene now shifts to the backstage areas of a traveling circus, where the various performers are shown in random scenes of convivial social interaction.  Many of the figures shown are freaks – deformed people whose physical grotesqueness or dwarfishness is supposed to attract curious spectators.  Among the dozen or so freaks who have significant roles here are 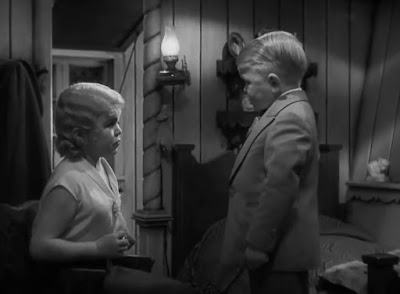 And there are also four other performers with normal physiques who figure prominently in this story:

But there are clear-cut differences among these four “normal” characters concerning how they treat the freaks.  Cleopatra and Hercules, like many of the other circus workers, are scornfully dismissive of the freaks.  In contrast, Venus and Phroso treat the freaks cordially as ordinary friends and colleagues – they all belong to the same team.  This contrasting treatment is a major thematic element of the story.

In this first section of the film, dwarfs Hans and Frieda are shown to be in love and becoming engaged to be married.  But Cleopatra then mockingly flirts with Hans and seduces the unsuspecting dwarf 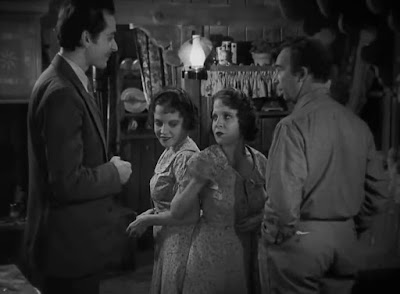 to fall in love with her, instead.  We also see Venus breaking up with the arrogant Hercules and turning her attention to Phroso.  Afterwards, Cleopatra begins flirting with Hercules.

Another interesting sequence shows the pretty Siamese Twins, Violet and Daisy, each becoming enthralled with and finally engaged to marry different men, who will somehow have to learn to deal with the conjoined situation of their spouses.

Frieda, concerned that Cleopatra’s flirtations with Hans are only intended to make a fool of her own beloved, goes to the woman and urges her to desist from this mockery.  But while speaking to Cleopatra, Frieda inadvertently reveals that Hans is due to inherit a vast fortune in the near future.  This news gets Cleopatra’s mind working, and she afterwards reveals to her real lover, Hercules, about her murderous plans to marry Hans and get his money.

The wedding is arranged, and there follows the memorably expressionistic wedding feast for Hans and Cleopatra, with all the freaks in celebratory attendance.  During the festivities, everyone gets drunk, and while noone is looking, Cleopatra secretly pours poison into Hans’s wine drink.

Meanwhile the party revellers become increasingly exuberant, and they begin chanting a phrase welcoming Cleopatra into their community: 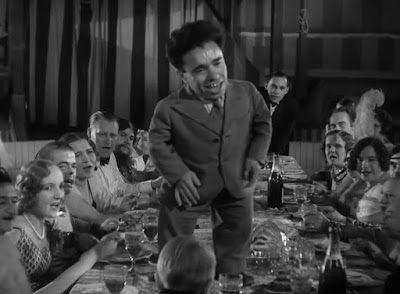 Cleopatra, in reaction, is horrified at the suggestion that she could ever be one of “them”.  After all, to her, they are all just odious freaks, and she angrily orders everyone to leave the party.

Cleopatra tends to the now-seriously-ill Hans, and when he regains consciousness the next day, she apologizes for her behavior the previous night, telling him she was drunk.  But she continues to add poison to the medicine that the doctor has prescribed for Hans.

However, Hans and the other freaks, who have been spying on Cleopatra and have witnessed her adding something to Hans’s medicine, are now suspicious.  So Hans only pretends to swallow the medicine she gives him, and he conspires with the other freaks about what they need to do.

This sets the stage for the final sequences on a dark and stormy night with the circus wagons on the move.  Hans and his freak colleagues catch Cleopatra red-handed giving the poison to Hans and confront her.  Meanwhile, Hercules, who knows that Venus is aware of his and Cleopatra’s murderous scheme, goes to Venus’s wagon with the intent to kill her.  But Phroso and other freaks rush to Venus’s defense.  Can justice be served?  Can the defenseless be saved? 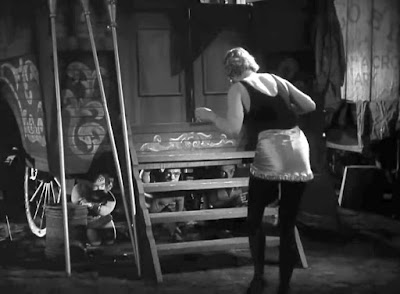 Of course, the freaks are very limited in terms of any physical prowess, especially when compared to Hercules.  But we are shown that they can work together as a team, and as I mentioned, their inclusive sense of belonging (to be “one of us”) is a major theme of this story and plays an important role here.  What transpires at this point is highly dramatic as the fiercely loyal freaks get the upper-hand.

The story now shifts back to “the present”, with the carnival barker still touting his special freak on display.  Only on this occasion, the camera shows the barker’s freak to the viewer, revealing it to be a grotesquely deformed Cleopatra.  She now looks like a strange, oversized duck and has become “one of them”.

The final scene is something of a coda, and it shows Hans having inherited his fortune and living solemnly alone in a luxurious mansion.  He gets a surprise visit from friends Venus, Phroso, and Frieda, and this serves to bring about a reconciliation between Hans and Frieda, which enables the film to end on a more happy note.

Now from this overall account of the film you might wonder what is it that makes Freaks a horror film.  True, there are attempted murders and acts of revenge, but does the film truly evoke in the empathetic viewer a horrifying fear of the unknown?  Yes, definitely.  Something ultimately unfathomable 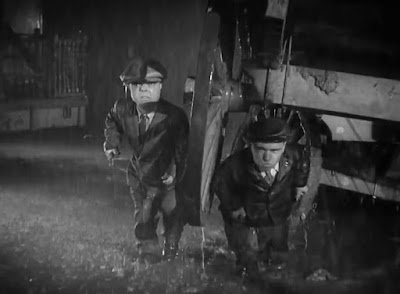 to us has imposed freakish forms on these innocent circus freaks, which has led the rest of the world to reject their humanity.  So ordinary people are customarily driven to see these freaks as monsters with likely disturbing characteristics.  But as the story unfolds, the viewer gradually sees that it is the freaks who are psychologically “normal” and humane.  In fact many of them can be seen to be childlike and spontaneously loving towards others.  On the other hand, Cleopatra and Hercules, who are physically attractive and thereby socially confident, are not normal on the inside; they are (psychologically) monstrous.

Note that for most of the film, our freaks are the relentlessly oppressed ones; but towards the end, the freaks rally together to take revenge on their oppressors.  And yet the 64-minute version we have today does not, thankfully, stand as a typical revenge film.  That is because, perhaps accidentally due to the negative reactions from pre-screening audiences and threats of censorship, much of the material ultimately excised from the original 90-minute cut was concerned with vivid acts of vengeance taken on Cleopatra and Hercules [11].  What remained was a film whose overall tone was more humane and more sympathetic towards the freaks.

So what makes this film a masterpiece?  It arises from the fact that the viewer watching the film will empathize with some characters at different times and in different ways, and thereby see them from multiple, contrasting perspectives.  They will see the freaks, for example, sometimes 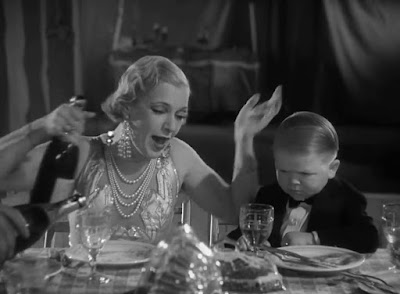 from the perspectives of their own freak colleagues and sometimes from the perspectives of the freaks’ antagonists, Cleopatra and Hercules.  From each side – whether from Cleopatra’s or that of the freaks – the “other” comes to be seen, with horror, as something of a macabre menace.  And the viewer, too, sees both of these horrifying perspectives, sometimes at the same time.  This multiplex view of threatening agency is what makes the film a compelling work of art.