Skip to Content
Home Movies The Film Sufi: “The Departed” 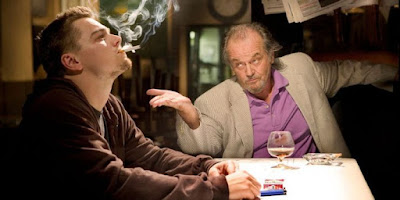 featured atmospheric and emotive coverage of a gangster underworld.  On this occasion, Scorsese had a $90 million production budget and a star-studded cast, featuring Jack Nicholson, Leonardo DiCaprio, Matt Damon, Martin Sheen, and Alec Baldwin, to help ensure that The Departed would be another blockbuster at the box office.  And sure enough, the film won great favor with the public and the critics [1,2,3,4].  It also garnered four Oscars, including the one for Best Picture.  One of the other Oscars that the film gained was the one for Best Director – the only time that Scorsese has ever won that particular award (he has been nominated for such an Oscar eight other times over the course of his illustrious career).  Nevertheless, The Departed has not won universal acclaim from all critics, and I am among those who have found some shortcomings with the film [5,6,7,8].

One of the main things that fascinates viewers of The Departed is its convoluted spy-versus-spy story structure.  It has a plot based closely on that of the popular Hong Kong crime thriller Infernal Affairs (2002) that was directed by Andrew Lau and Alan Mak and written by  Mak and Felix Chong.  William Monahan’s adaptation of this same story for The Departed won him an Oscar for Best Writing, Adapted Screenplay.

The story for The Departed is set in South Boston and involves a struggle between a mobster’s gang in that area and the Massachusetts State Police (MSP).  The leader of that underworld gang is Frank Costello (played by Jack Nicholson), but he has so far been too cagey to ever get arrested by the police.  We see an early example of that caginess when the film shows how Costello has groomed 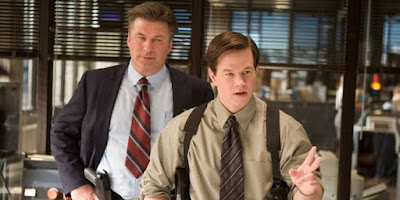 a young man from his neighborhood, Colin Sullivan (Matt Damon), to be a mole for his gang inside the police force.  Sullivan advances quickly inside the MSP and is soon accepted to join the Special Investigation Unit (SIU), which is headed by Captain George Ellerby (Alec Baldwin) and whose current main goal is to pin a rap on Costello.  So a spot in the SIU is exactly where Costello has wanted Sullivan to be.

Meanwhile a student about to graduate from the MSP academy, Billy Costigan (Leonardo DiCaprio), is recruited by Captain Oliver Queenan (Martin Sheen) and Staff Sergeant Sean Dignam (Mark Wahlberg) to become a spy for the police inside Costello’s gang.  Queenan and Dignam then appropriately doctor Costigan’s already sullied background to be suitable for him to join Costello’s outfit.

Much of the rest of the film follows the parallel, and mostly separate, narrative threads concerning the activities of the two moles.  Since their identities and activities must be kept secret, the secret identities of Costigan and Sullivan are unknown to each other, as well as unknown to their colleagues on each side of the fence.  When both Costello and the SIU eventually figure out that each of the contesting groups has an unknown rat informant in their ranks, it is not too surprising that both Costigan and Sullivan are then tasked with the jobs of uncovering the hidden mole (i.e. themselves) in their respective groups. 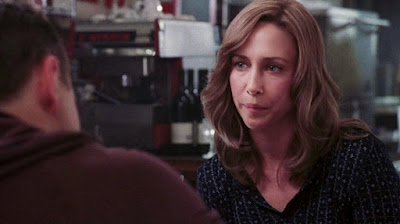 Things get even more entangled when both Sullivan and Costigan wind up talking separately to a young female police psychiatrist, Dr. Madolyn Madden (Vera Farmiga).  And, of course, what should never happen in such circumstance, does indeed come about – Dr. Madden soon has sexual relations with both Sullivan and Costigan.  This unlikely plot contrivance provides a particularly striking narrative opportunity for dwelling on one of the film’s major themes – establishing one’s true identity.

Throughout the film, we see interactions among people with hidden identities.  And these veiled interactions set up opportunities for the endless double-crosses that take place in the story.  One mind-blowing additional identity obfuscation is revealed when, well into the story, Costigan learns that gang leader Costello is actually an FBI informant and therefore protected.

But there are two aspects of identity – external and internal.  The external is what is presented to other people, and that can be falsified for opportunistic gain.  But one’s internal identity is how one sees him-or-herself, and this was a matter of deep concern for Sullivan and Costigan.  In particular, Sullivan was concerned about his manhood and sexual identity.  His implied impotence even leads him to unconsciously question his own sexual gender preference.  Costigan, on the other hand, had a guilty conscience and was concerned about his authenticity and the control of his volatile temper.

Another theme in the film, and one that is common in Scorsese films, concerns masculinity.  Of course this is probably always an issue in the criminal underworld, but it is heavily emphasized in this film.  Sullivan is particularly concerned about his masculinity, and his self-doubts are starkly contrasted with the hyper-confidence of his idol, Costello, whose motto is 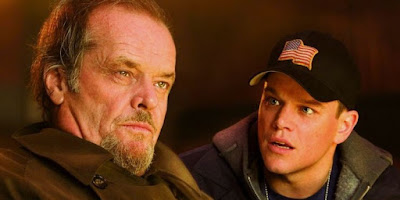 Anyway, the various encounters involving masculinity confrontations and identity misunderstandings only accelerate and fuel further double-crosses as the story proceeds.  And these lead in the closing scenes to a string of murders undertaken for revenge and self-protection.  There is no morality or sense of human justice in this gangland underworld.  Eventually, most of our principal characters wind up getting killed – Sullivan, Costigan, Costello, Capt. Queenan, and Costello’s right-hand man French (Ray Winstone).  But is there a narrative purpose or resolution to all these killings?  What is the story being told here?  It seems that many viewers have problems on this score.  In particular Sean Dignam’s murder of Sullivan at the very end of the film has left many people wondering why (although some plausible explanations have been put forward [9]).

So, overall, what do we walk away with at the close of The Departed?  Although, as I mentioned, the film did win many awards and success at the box office, I would still say that there are a number of weaknesses that detract from the viewing experience.  I have already mentioned the aimlessness of the narrative, but there are other major problems with this production, too.

So although The Departed has some characteristic Scorsese virtues, it has enough deficiencies to bring it down a few notches.  And this means that the film, despite its flamboyant production values, does not quite measure up to its inspiration, Infernal Affairs.
★★½