White Heat (1949), starring James Cagney, is certainly regarded as one of the best gangster films ever made, and indeed some people rank it among the greatest films, period.  Time magazine 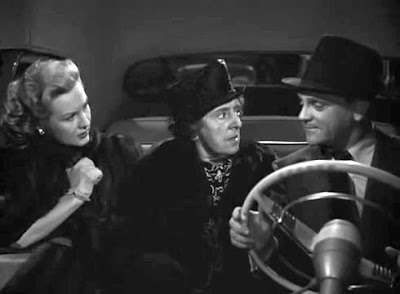 So what is so special about White Heat?  Overall, the production values were excellent but were characteristic of many top Warner Brothers’ films of this time.  The film was directed by veteran Raoul Walsh, with noirish cinematography by Sidney Hickox, film editing by Owen Marks, and emphatic screen music by Max Steiner.  However, as professionally performed as these elements were, they are probably not primarily responsible for the film’s lasting popularity.  More telling in this regard was probably (a) the film’s dark-laden script by Ivan Goff and Ben Roberts, which was based on a story by Virginia Kellogg, and (b) the memorably expressive acting of James Cagney.  This seemed to extend the film beyond the usual boundaries of a gangster movie or film noir and into the region of the horror genre.  For truly the character that Cagney plays in White Heat is something of a monster.

The story of White Heat is rather extended and moves through four somewhat twisted segments covering the nefarious activities of the criminal gang run by Arthur “Cody” Jarrett (played by James Cagney).  Over the course of this account, the viewer gets an increasingly extended picture of just how depraved is Cody Jarrett.  Along the way, there are two key themes that underlie what is going on:

These are more than just fascinating narrative elements; they identify profound issues that affect each and every one of us to this day.  In this regard, historian Yuval Noah Harari has argued that our entire civilized existence is based on our acceptance of common narratives that generate trust and facilitate cooperative operation crucial to the success of our society [12,13].  Moreover, Harari has argued that encroachments and disruptions arising from advanced computer technology represent existential threats to our entire way of life.

At the outset, Cody Jarrett (James Cagney) and his gang ambush a train in the California mountains and rob a payroll of $360,000 [14] it was carrying.  The cruelty of Cody and his gang is immediately evident when we see them killing four innocent people during the robbery. 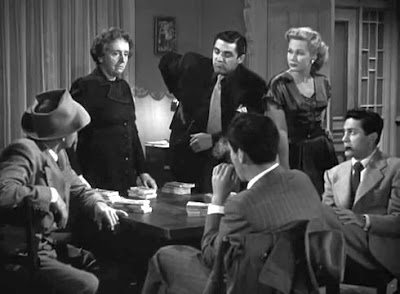 Afterwards the gang gather in a motel hideout, where Cody’s wife, Verna (Virginia Mayo) and his mother, “Ma” Jarrett (Margaret Wycherly), attend to them.  Ma Jarrett is criminally minded herself and is shown to be a gang co-conspirator.  Cody is also shown to be a secret sufferer of severe and temporarily disabling migraine headaches, which only Ma can soothe.
There is a further display of Cody’s inherently cruel nature when the gang is about to depart from their temporary hideout and head off in separate directions.  Cody looks at one of the gang members who was severely injured during the train robbery and just sees him as a burden, so he orders another gang member to kill him.

Cody has committed a federal crime, and US federal investigator Philip Evans (John Archer) starts looking for evidence.  Using advanced technology, like fingerprints and walkie-talkie coordination, he traces Cody and his family to a Los Angeles motel.  But when he tries to arrest his suspect, Cody shoots him (but not lethally) and escapes.  Cody is now on the run and needs an airtight alibi. 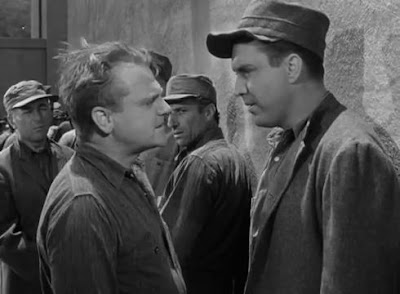 Cody decides to confess to a lesser crime committed on the same day as the train robbery in faraway Illinois by one of his associates.  He readily accepts the guilty verdict and begins serving his 1-to-3-year prison sentence.  However investigator Evans still thinks Cody is guilty of the train robbery and wants to track down the “fence” Cody has used to launder his stolen goods.   So Evans plants an undercover agent, Hank Fallon (Edmond O’Brien), operating under the name “Vic Pardo”, in Cody’s Illinois prison cell in order to spy on Cody and uncover wanted information.

Meanwhile on the outside, Cody’s right-hand-man, “Big Ed” Somers (Steve Cochran), seeks to take over the gang and seduce Cody’s beautiful wife, Verna, too.  He tries to arrange to have Cody murdered in prison, but that attempt fails and only leads to Cody having more trust in Vic Pardo.

However, when Cody learns that Ma has been murdered (by Verna, we later learn), he goes berserk in the prison mess hall.  Cagney’s crazed outburst here is famous and has led critic Vivaan Shah to call it “the finest piece of acting ever filmed“ [3].  Cody is straitjacketed and taken to a special cell, but amazingly he manages to escape from the prison with Vic Pardo and some other cell-mates. 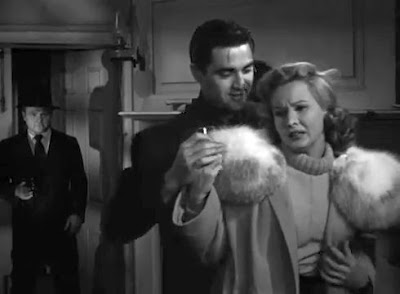 On the outside now, Cody, wrongly assuming that Big Ed killed Ma, shoots and kills Big Ed.  Then he and the gang, now including the mistakenly trusted Pardo, start thinking about their next caper.  Here we finally meet the fence, Daniel Winston (Fred Clark), known as “The Trader”, who advises them to steal the payroll from a chemical plant.  The plan is for the gang members to sneak into the walled-off plant by hiding inside an empty tanker truck that they have procured.  Pardo, however, manages to surreptitiously rig up some electronic signal-processing equipment inside the tanker so that the police can track the truck’s whereabouts by radar.

In the event, there is another grim display of faceless hi-tech surveillance, as the police, again using their walkie-talkies, trace and follow the gang’s truck to a big chemical plant.  Cody and his gang arrive first and manage to get into the payroll office, but the police come and storm the building.  A brutal shootout ensues, and most of Cody’s gang are killed.  But Cody, a heartless rogue to the end, climbs up on top of a huge gas storage tank and shoots his last remaining gang colleague, who was trying to surrender, in the back.  The final fiery shots show Cody engulfed in flames high atop the burning storage tank and shouting, “Made it, Ma! Top of the world!”.  Truly he has found his home in Hell.

When we survey the whole of White Heat, we can identify many melodramatic scenes and situations that are colourfully depicted, but the question still remains – what is it that makes this film so popular?  Most compelling narratives, including those of the film noir and gangster genres, have a character with whom the viewer can have some empathetic concern.  The viewer identifies with this character’s problematic situation.  Is there such a figure in White Heat?

So I don’t see any real sympathetic characters that the viewer can focus on in White Heat, and that is why I would say that this film seems to be not so much a film noir or a gangster movie and is instead more like a horror film or monster film.

Nevertheless, there is something fascinating about the Cody Jarrett character.  He is not some demonic figure, like Hannibal Lecter in The Silence of the Lambs (1991), whose complex evil scheme the viewer tries to unwind.  Jarrett is relatively transparent in that respect.  Nor is the viewer privy to some sort of, maybe empathy-inducing, inchoate struggle on the part of the antagonist to be more human, as was the case of Frankenstein’s (1931) monster.  Rather, there is something intrinsically 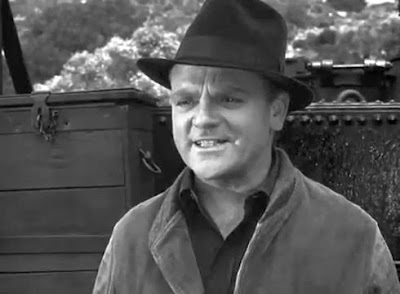 So the magnetic Cody Jarrett, afflicted by crippling migraines and surrounded by traitors and encircling law enforcers, never gives up and ultimately goes it alone.  It is, especially given the prevailing Hays Code at the time, an inevitably doomed ride.  But Cody keeps going, and he takes the viewer along with him.