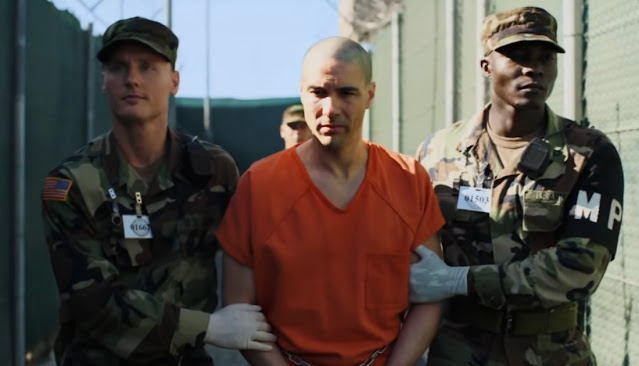 When the noted French-Algerian actor Tahar
Rahim received the script for “The Mauritanian” he was expecting another
run-of-the-mill Hollywood script propagating a familiar sense of Islamophobia. For
the last decade ever since his breakthrough performance in the celebrated
French filmmaker Jacques Audiard’s prison drama “A Prophet”, Hollywood had been
offering the same kind of roles over and over again. On opening the script when
he came across the world “Guantanamo” his apprehensions were more or less
confirmed. But to his great surprise he discovered something very different. The
character offered to him, Mohamedou Ould Slahi, is a real person who isn’t a
terrorist but was simply accused of being one.

Mohamedou, a Mauritanian man on whose memoir the film is based,
was deemed guilty by the US authorities though some vague association. As a
result, he was imprisoned for over 14 years without any trial in Guantanamo Bay
where he was constantly subjected to torture and abuse by US soldiers. He was
finally released in October 2016. In Rahim’s words, “It’s the first time I see
a Hollywood movie with a sympathetic Muslim at the centre.” And Rahim, to his
credit, plays Mohamedou as a gentle soul who somehow keeps his sanity intact
despite years of horrific treatment. The Mauritanian, directed by Kevin
Macdonald, stars the legendary Jodie Foster in the role of the no-nonsense
defence lawyer who fights for his release with Benedict Cumberbatch essaying
the part of the military prosecutor Lt. Colonel Stuart Couch.

There is no denying that a lot changed after 9/11 as the world
became far more paranoid than it had ever been. Soon after the tragic events of
September 11, the western world started witnessing a dramatic rise in Islamophobia.
Now, according to Wikipedia, “Islamophobia is the fear of, hatred of, or
prejudice against the religion of Islam or Muslims in general, especially when
seen as a geopolitical force or the source of terrorism.” Clearly, the increase
in Islamophobia could be attributed to Osama bin Laden’s Al-Qaeda. Hollywood,
of course, played its part though its stereotypical portrayal of Muslims and
Islam in countless films. And it wasn’t until Mira Nair’s 2012 film “The
Reluctant Fundamentalist” that the issue got properly addressed by Hollywood.

On the other hand, Bollywood filmmaker Kabir Khan highlighted
the issue in his 2009 film “New York” though the character of Sameer Sheikh,
essayed by John Abraham, who Sam gets arrested and detained for a period of
nine months as a suspected terrorist. Though he is eventually released due to
lack of evidence, the impact of being detained and tortured permanently changes
him in ways which are difficult to comprehend for those surrounding him. A
couple of years prior to the Kabir Khan film, the noted Pakistani director Shoaib
Mansoor made “Khuda Kay Liye” which presents a graphic account of a man getting
detained and tortured for a year at the Guantanamo Bay detention camp due to
his Islamic background after the US authorities receive a false complaint from
his neighbor.

But, in many ways, The Mauritanian stands out in its depiction
of the atrocities that prisoners at Guantanamo Bay have undergone over the
years. For, Mohamedou’s 2015 memoir titled “Guantanamo Diary” is a testament to
what he had to experience for 14 years of his life. He wrote the book in 2005
in Guantanamo Bay but each page had to be submitted to military censors. A
total of 2,500 redactions were made before releasing the manuscript to his
attorneys seven years later. So, the 2015 edition which went on to become an
international bestseller was heavily redacted. He was even prohibited from
receiving a copy of his published book while imprisoned. It was only in 2017 that
it was republished with redactions fully removed. While the Biden
administration has declared its intention to shut down Guantanamo Bay detention
camp there is no certainty that it is going to happen any time soon. But, Mohamedou’s
story of redemption certainly gives one hope.

The Mauritanian is far removed from the run-of-the-mill
Hollywood films we have become accustomed to watching with the theme of global
terrorism at its core. Kevin Macdonald and his team of writers offer something
refreshingly different. Here is a deeply humanistic film which isn’t afraid to
question the dubious role played by the US authorities in destroying the lives
of innocent people like Mohamedou. As a matter of fact, it exposes how both the
Bush as well as the Obama administrations kept prolonging Mohamedou’s ordeal at
Guantanamo Bay. Perhaps, it’s for this reason the film didn’t find much
traction with the members of The Academy despite receiving multiple Golden
Globe and BAFTA nominations. The performance by Tahar Rahim (who interestingly stars
as the con artist and serial killer Charles Sobhraj in the Netflix series “The
Serpent”) certainly deserved an Oscar nomination for portraying the part of Mohamedou
Ould Slahi with such great conviction. Also, the deeply nuanced performances by
Jodie Foster and Benedict Cumberbatch deserved more attention.