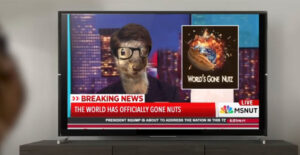 What’s It All About

What better way to portray the chaos that crash-landed in our world during the unforgettable year, 2020, than with squirrels and their nuts? This delightful animated music video, The World’s Gone Nutz, featuring real backyard squirrels (sometimes dressed as influential world leaders and other notable characters), is a well-choreographed and light-hearted look at the unanticipated events and pandemonium that ensued during the past year – everything from Brexit to Kim Jong Un to Bitcoin to “fake news” to Ruth Bader Ginsburg to Black Lives Matter, and all the way through to lockdowns as a result of a worldwide pandemic. The performance highlights not only the overarching effects of COVID-19, but more importantly, the general topsy-turvy nature of the world we live in as we navigate the vicissitudes of a politically and morally divided populace where down is up and up is down.

This was truly a brilliant rendition by the filmmaker/musician Daniel Robert Cohn, and encompassed all of the historically important highlights of a year in which many now may wish to forget, but whose descendants may in fact later on be fascinated to look back on with gratitude for the lessons learned. In the way that numerous history teachers latched onto Billy Joel’s We Didn’t Start the Fire to help their pupils comprehend some of the notable events that shaped the world in which they now live, so, too, might Daniel Robert Cohn’s visual and lyrical representation of the age remind and educate in a pop culture-like manner the good, the bad, and the ugly events of 2020, and set the stage for a deeper dive into how these things came to be. After all, learning is so much more meaningful when it is enjoyable and engages the imagination.

The electric guitar had me rocking; the beat was fun and engaging. The scenery was well-developed and crisp. The squirrels were affable and entertaining. Due to it’s timely message and clever approach, it is altogether a golden gem of a video that deserves a much a wider audience than the number of views it has garnered to date.

For more information on The World’s Gone Nutz Click Here.