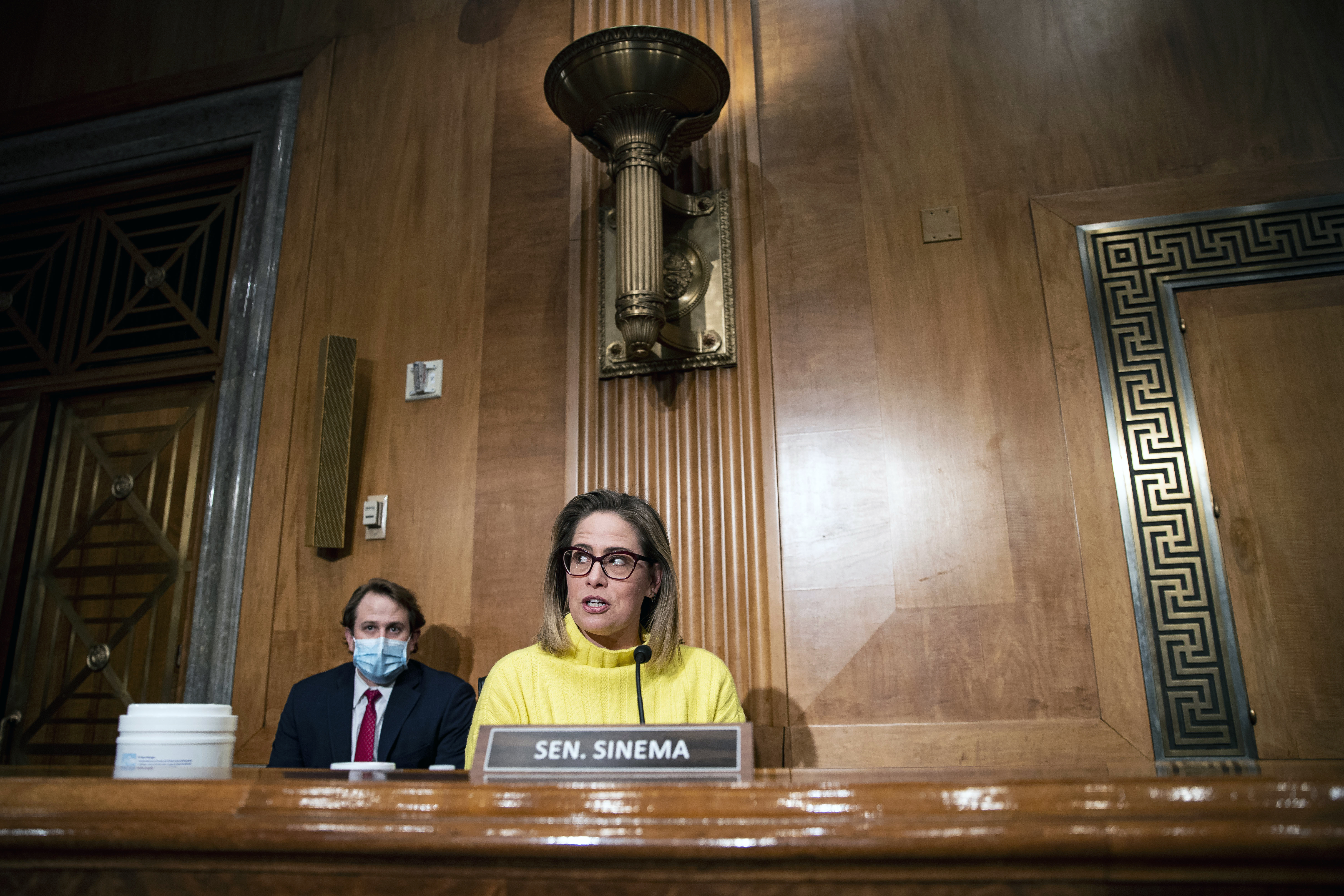 “And that’s how it started,” Sinema said in an interview, summing up the sequence of events: “Not very dramatic, is it?”

Yet the formation of the four-senator negotiating group was the most important moment in the gun safety talks, according to interviews with more than a dozen senators and aides. And after years of failed gun negotiations, the personalities and policy profiles of the foursome proved critical to success in a 50-50 Senate where progress is unusually swayed by “gangs” of aspiring dealmakers.

There’s Sinema, the centrist who sometimes seems closer to McConnell and Thune than her own party leadership, and Tillis, who’s newly emboldened to cut deals after winning a second term in North Carolina. Murphy and Cornyn, near-polar opposites on most issues, are now united by representing states wracked by mass shootings of children.

“I don’t necessarily think a thought process went into saying: ‘These are the four people,’” Tillis said in an interview. “That’s how it worked out organically.”

But as a quartet, they’ve proven to their colleagues that a deal supported by both gun control activists and conservative Republicans is achievable. Though crafting the framework was arduous — requiring Democrats to narrow their focus and Republicans to get a bit out of their comfort zone — they’re now delving into the challenging task of writing bill text. And it’s clear the drama isn’t over.

During a private GOP conference lunch Tuesday, which one attendee described as “kind of fiery,” Republican senators raised concerns about elements of the gun framework, the quick timeline for passing the legislation and how it would affect their own political positions at home. Multiple Republicans reported specific qualms with the framework’s state grants for so-called red flag laws, which allow the temporary confiscation of firearms from individuals deemed threats to themselves or others.

To limit future infighting on either side of the aisle, proponents of the deal want to see the Senate pass it swiftly before leaving next week for the July 4 recess. To reach that goal, the core four senators must maintain their mutual trust in the coming days.

There’s plenty of experience to build on: Murphy and Cornyn worked together for years on gun safety, including on 2018 legislation to strengthen the background check system. Murphy also negotiated with Sinema on prescription drug reform and traveled to Europe this year with Tillis.

Cornyn, meanwhile, went to the border with Sinema this Congress, while Tillis and Sinema worked together on veterans issues as soon as Sinema joined the Senate in 2019. Both Tillis and Cornyn also sit on the Senate Judiciary Committee, which technically has jurisdiction over guns.

Yet even with those longstanding ties among the principal players, this is still a negotiation over guns in America — and so things occasionally went off track. Senators involved in the talks thought they had an agreement on Friday, with some even beginning to prepare supportive statements. But they weren’t quite ready to release a joint statement from 20 senators backing the legislation, and instead they scattered across the country for the weekend.

Tillis, Cornyn, Murphy and Sinema furiously texted among themselves throughout the weekend break to try and release a statement showing the deal could pass the Senate. And the digital medium wasn’t always a great substitute for the in-person meetings that senators preferred. At one point, Cornyn thought the negotiations were being reopened after the four had already agreed to their framework.

That turned out to be a classic text-message miscommunication, albeit one that momentarily alarmed Cornyn: “We had agreed to something. And it is a matter of maintaining the trust that we had achieved … that we should go ahead and release what we had all agreed to.”

“Unfortunately, most of what we were doing was remote and on the phone and text messages,” Cornyn said of the race to complete the guns framework. “What I discovered is, sometimes when people are talking to each other, they hear different words in different ways … we got through it.”

That the negotiations happened at all shocked almost everyone in the Capitol. Schumer helped in his own way by, the day after the shooting, delivering a restrained floor speech in which he ruled out a quick vote on legislation that Republicans would block. After his speech, Schumer met with Murphy, who asked the majority leader to give him about 10 days to talk to the GOP.

Schumer was under pressure from the left to move more quickly and force Republicans to reject gun restrictions. But Murphy, who was already in touch with Cornyn, said in an interview that Schumer was “not hard to convince.”

Likewise, McConnell prodded Cornyn to engage with Murphy — a surprising development that may ultimately put the Republican leader at odds with the majority of his conference, on a topic much more polarizing than the infrastructure deal he blessed last year. After hearing complaints from several GOP senators on Tuesday, McConnell nonetheless said that if the subsequent bill reflects the framework, he will support it.

“These are important and timely issues. And I think leaders on both sides recognize that. And they want to give the space to see what can be agreed to,” said Sen. Lisa Murkowski (R-Alaska).

Murkowski usually joins the Senate’s bipartisan gangs and called this one’s work “very encouraging.” Still, she’s up for re-election this year in what she called a “strong Second Amendment state” and is not yet committed to backing the agreement.

Beyond Cornyn and Tillis, the group of 20 senators is a mix of party leaders, retiring Republicans and reliable Senate deal-cutters. About a dozen of them negotiated behind the scenes alongside the core four senators. On Tuesday, Cornyn delivered a presentation to the GOP conference that highlighted Republican wins in the deal, including polling that showed voters including gun-owning households backing its provisions.

Tillis and Sinema helped organize the guns framework’s filibuster-proof majority, bolstered by backing from 10 Republican senators. It’s a number that showed the group means business: This isn’t a long-shot effort begging for floor time, but a lightning-strike agreement with real leadership buy-in.

Sen. Mitt Romney (R-Utah), a framework supporter, said after the killings in Uvalde, Texas, and Buffalo, N.Y., “there’s been a shift in the emotional environment of the country” that created space for a deal on a third-rail issue.

Cornyn and Murphy are playing a more prominent public role, each giving updates on the Senate floor and in the media intended to keep things on track. They are important messengers for their parties, nearly immune to criticism on the subject of firearms: Murphy is the chamber’s conscience on gun violence following the 2012 Sandy Hook massacre in his state and Cornyn’s NRA rating is A+.

And they continue to cater to their divergent bases; Cornyn assures Republicans there’s no national red flag law in the legislation, Murphy is telegraphing to activists that this is the best Democrats can get in an evenly split Senate.

Still, the deal announced on Sunday had a few surprises. Lawmakers had talked about enhanced background checks for gun buyers under 21, encouraging expanded state red flag laws and boosting spending on mental health as well as school security. Yet the framework went further, proposing a crackdown on straw purchases, unlicensed firearm dealers and a provision known as the “boyfriend loophole” that’s bedeviled Congress for years.

Closing that loophole was Sinema’s first proposal during the quartet’s first meeting in her Capitol hideaway nearly three weeks ago. There she raised the subject of expanding prohibitions on firearm access for domestic abusers beyond just spouses, a provision that proved too controversial to make it in the recent reauthorization of the Violence Against Women Act.

The idea stayed below the radar as the framework took shape and wasn’t contentious enough for Republicans to immediately reject. Republican senators said that ironing out the language for who falls under the “boyfriend loophole” could be challenging in the coming days. But with a deal in hand and backing from both Senate leaders, the toughest work may be behind the core four.

As Murphy put it on Tuesday: “We’re right now in the process of drafting this legislation. But the heavy lifting is done.”