It’s all over for Zac Efron and Vanessa Valladares.

Last week, we learned the former couple, who met in Byron Bay last year had gone their separate ways.

The exes were photographed together on multiple occasions during the pandemic, but it appears the relationship had run its course.

Here are all the details we know.

Why did Zac Efron and Vanessa Valladares break up?

Kyle Sandilands confirmed speculation Efron and Valladares split after “speaking with him yesterday.”

“I heard a rumour around that Netflix show they were going to do in Byron [the show Byron Baes], which was bulls–t, that Zac was trying to pull strings to get her on that show,” Sandilands said on live radio. “So that’s what I rang him about.”

“He was like ‘oh bro, it’s only recent, not like yesterday recent’ that they’ve gone their separate ways,” Sandilands said.

“No drama, but it’s done. He’s back to work, they spent a lot of time with each other when he wasn’t working. Then works comes back, and it kicks you straight back into reality.”

“Zac is about to start a busy year of filming and wanted to make a clean break,” an insider told Us Weekly, noting the former couple had been living in a house in Byron Bay.

Efron is set to fly to Canada in May for a film adaptation of Stephen King’s novel Firestarter alongside Anne Hathaway. The move means Efron would no longer be paying for a house he isn’t living in which “wasn’t going to work for him”, the source said.

READ MORE: Why are there so many celebrities in Australia right now?

The source added Efron is “secretly relieved about this turn of events as he feels she would be a distraction to him during the filming of the intense drama.”

Another source told People the split occurred because “it just didn’t feel right to him anymore”.

Efron reportedly met Valladares when she working as a waitress at the Byron Bay General Store cafe in June 2020.

How long did Zac Efron and Vanessa Valladares date?

“Zac met Ness earlier in the summer. They started hanging out in July 2020 and recently took a ski trip together,” a source told People at the time. “You can tell that they are having fun.” Valladares was later photographed at his 33rd birthday bash that she reportedly planned for the actor.

In January, the exes were spotted walking around the inner-city suburb of Haymarket, before dining at Korean restaurant Bornga.

They were last seen together in Melbourne on March 22, in photos obtained by The Daily Mail.

There’s no confirmation that Valladares is slated to appear in the controversial new TV program Byron Baes.

There were rumours circulating that Efron was trying to get her on the show, which Sandilands debunked. See above.

How old is Vanessa Valladares?

Who has Zac Efron previously dated?

He was also in a highly-publicised relationship with his High School Musical co-star Vanessa Hudgens between 2007 and 2010.

Who has Vanessa Valladares previously dated?

We don’t know much about Valladeres’ romantic life.

You can find Vanessa Valladares on Instagram @_is_ness. She currently has 90k followers on the platform. 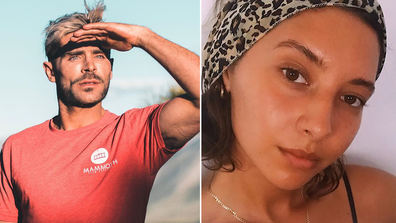